The interest in this article lies in the author’s description of how the private media treat incidents such as this. 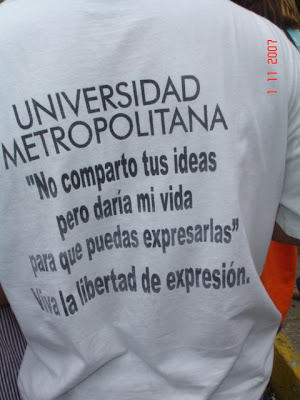 These acts of unbridled ecological vandalism occurred during a freeway blocking protest against the proposed constitutional amendment removing all postulation term limits contained in the 1999 Bolivarian Constitution. It took place on the Avenida Boyacá freeway (Cota Mil) which accesses the main freeway to Guarenas, a satellite town approximately 15 miles from Caracas.

Mind boggling jams built up as frustrated motorists tried to reach their work places. Even though it is illegal to block public highways in Venezuela and prejudice the civil rights of others, the bourgeois students act in this uncivil manner as a matter of course. There were no arrests and no injuries on the student side, but 3 Metropolitan Police officers were injured after being hit by rocks on the head and in the face. Impunity is widespread in Venezuela which encourages this kind of criminal behavior.

As if by magic the private media was there to give maximum coverage to this protest and no comments was made about the illegal nature of blocking the freeway or that this protest did not have a permit. However, the students did not count with the fact that strict instructions had been given to the Metropolitan Police and the National Guard not to repress the protest. The tear gas seen in the accompanying video was thrown by the students who came prepared for a battle with the authorities armed with stones, gas bombs, gas masks and gasoline.

Readers – please note that although the vast majority of the Venezuelan population is of mixed race (mestizo in Spanish) one can observe that almost all the students are from European white stock, who are a minority in the country but form the largest section of the privileged middle classes.

The video was filmed by the police and played on national television and radio by orders of President Chavez himself. The question is what does setting fire to a national park have to do with a street protest for political reasons? Is it pure mindless vandalism? Are these thugs a future part of the Venezuelan hierarchy waiting in the wings?

As an aside consider the following social commentary. The Bolivarian movement is soundly ecologically based and thousands of people from the barrios participate in “Mission Tree”. This mission is part of the participatory ecological policy of the Ministry of the Environment and encourages mainly young people to collect native seedlings and plant them in the Guaraira Repano (Avila) national park in the case of Caracas.

Nationwide, since 2006, over 3 million seeds and saplings have been planted north of the Rivero Orinoco. Now, the destructive nature of repugnant middle class vandals, opposed to anything “Bolivarian”, manifests itself by setting fire to the national park, which is the “lung” of Caracas and is being partly maintained by the voluntary work and dedication of Venezuelans who really love their homeland. This is really food for thought for readers used to being influenced by just “bad news” about Venezuela in the corporate media.

Freedom of Expression or Freedom to Misinform?

The private media covering the story deliberately failed to mention the fire raising fun and classified the protest as “peaceful” as students “peacefully” threw “democratic” rocks and “peacefully” poured gasoline on to the vegetation. The following day’s newspapers misinformed the public stating that the protest was dispersed by tear gas and water cannons. Nothing could be further from the truth.

The President of the Ecological and Environmental Commission of the National Assembly, Earle Herrera, will issues citations to the owners of these private universities to testify before the National Assembly. These people will have to explain the fire raising acts of vandalism committed by their students. Those responsible for allowing protests of students to get out of hand and commit illegal acts – fire raising, blocking public highways and protesting without a permit – could be held accountable for being remiss in not applying rules and regulations to their students, since the protest originated from their campuses.

This entry was posted in RagBlog and tagged Latin America, Political Protest, Venezuela. Bookmark the permalink.