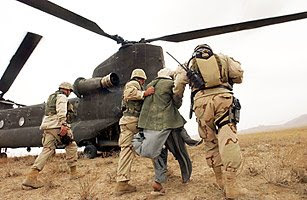 “However, if, for unseen reasons, an emergency landing were necessary, the U.S. government would like the Spanish government’s authorization to use one of our airports.”

Spain’s Secret Role in the War on Terror
By Lisa Abend, Madrid / December 2, 2008

In normal times, the request would be superfluous. International aviation law and a separate bilateral agreement between Spain and the United States both require all airports in the two countries to permit emergency landings. But the flights the Spanish note refers to were far from normal. The year was 2002 and the U.S. Air Force was transferring Taliban and al-Qaeda prisoners from Afghanistan to a U.S. prison in Guantanamo Bay. Washington wanted to know if Spain could help.

It could. On Nov. 30, Spain’s El Pais newspaper published a document, marked “top secret,” that proves that high-ranking officials within the former government of Jose Maria Aznar, including the foreign minister Josep Pique, not only had knowledge of, but gave permission to the United States to use military bases in Spain for layovers during the long flight from Afghanistan to Cuba. (See pictures from inside Guantanamo.)

“The arrests of the people on board those flights were made without lawyers, without a judge’s authorization,” says Esteban Beltran, president of the Spanish branch of Amnesty International, which has conducted its own investigation into the secret flights. “Which means that the Spanish government colluded with illegal detentions.”

Just hours after Spain’s foreign affairs ministry communicated its assent to the U.S. embassy request on January 11, 2002, a flight took off from a military base in Moron, in southern Spain. “From our investigation using Portugal’s registry, we know that the plane originated in Kandahar, landed at Moron, crossed Portuguese air space, and continued on to Cuba,” says Beltran. “The 23 people onboard inaugurated Guantanamo.”

Spain’s government was clearly aware that the flights were of questionable legality. A separate document sent from the Spanish section of the Permanent Hispano-North American Committee and published in Monday’s El Pais suggests that out of the three U.S. military airports in Spain, Moron would be the “most discrete.” That same report urged its recipients to consider that “some of the people transported could have European nationality” and to “weigh the legal consequences.”

The Aznar government and its Socialist successor have long claimed ignorance of these military flights to Guantanamo, believed to number 13. On the day of the first El Pais story, current foreign minister Miguel Angel Moratinos told the press that he had had “no knowledge of the report” prior to its publication, and called for an internal investigation to locate any other related documents. “Our government is committed to the defense of human rights,” Moratinos said. “We have nothing to hide.”

Both Amnesty and the European Parliament have found evidence that the CIA also used civilian airports in Spain on 68 different occasions between 2002 and 2005 for layovers on flights used for the transport of suspected terrorists.

Spain’s national court has opened an investigation into the CIA flights, and it’s possible that the reports published in El Pais are part of the documentation submitted to the presiding judge. But the question of why these documents have surfaced now remains a mystery. “We have no idea where this came from,” says a spokesperson at the foreign ministry. “It was very surprising.”

This entry was posted in RagBlog and tagged CIA, Guantanamo, Spain, U.S. Government, War on Terror. Bookmark the permalink.