Spitzer on the Rocks 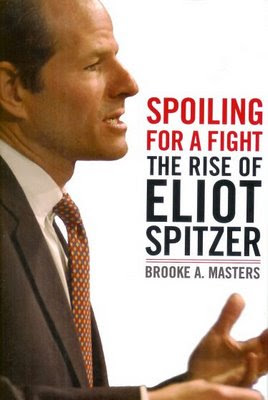 When Will Spitzer Finally Pull Out?
by Ward Harkavy / Village Voice / March 10, 2008

Will Eliot Spitzer resign in time for this evening’s network newscasts? I wouldn’t if I were him. I’d wait until right afterwards, so that my smiling face wouldn’t appear simultaneously on every TV set in the Western world.

This is not New York provincialism. Spitzer is practically the most prominent and powerful Democrat in a huge state — Hillary Clinton’s state, Wall Street’s state, the state of millions of Democrats.

Spitzer’s boner really sticks out, even in this day and age. He didn’t just get some on the side. He violated the law, if the federal complaint and published reports are true.

Yes, it will be more important to the country when Citigroup finally collapses. That will be a real disaster.

Still, there’s some meat to this Spitzer thing. In any case, the way it went down was a case of exquisite timing, coming on the heels of last night’s final episode of HBO’s The Wire.

My buddy and former colleague Adamma Ince just texted me:

Looks like Lester got Spitzer on the wire too.

She’s referring to Lester Freamon, the ace detective on that ace investigative entertainment series about political corruption. Lester, adept at tapping and taping politicians, lawyers, and drug dealers, was the shining cop of all “murder police” on that instantly legendary series.

Judging from the complaint that apparently involves Spitzer, there was some pretty good bugging going on against him too.

Lost in the babble over the Spitzer story are the dubious prostitution laws. Why exactly is prostitution criminalized? However, it is, and Spitzer just got finished with a long stint as attorney general, where he hounded others for breaking laws. And now he’s governor.

Is he just another Democrat who can’t keep his dick in his pants? Well, this situation is a lot worse than any sexual escapade of Bill Clinton’s. Spitzer hooked up with a hooker operation, if the federal complaint against him is accurate. And so he violated the Mann Act and other laws. How stupid is that?

Clinton, on the other hand, violated little more than Monica Lewinsky — and she would have paid him to have sex with her.

At least New Jersey Governor Jim McGreevey had an excuse for playing around: He was a closeted gay. Yes, he did give his boyfriend a government job, but at least he didn’t break any federal laws, at least that we know of.

McGreevey finally came out and said, “I’m a gay American.”

Spitzer can only say, “I’m a laid American.”

Big deal. But why in the world would Spitzer use an escort service? They all keep records, and there’s plenty of free stuff out there for pols. JFK didn’t write a check to Marilyn Monroe, did he?

Spitzer must have really needed a pro to get his kink on — not that there’s anything wrong with that.

And if the federal complaint is true.

In the end, Spitzer appears to be — based on what we know now, which could change any second — not only stupid but also hypocritical.

All over New York, sad-sack whores and chickenheads are being busted, and he doesn’t give a damn what happens to them. Not content with our state’s offerings, the governor of New York goes to D.C. to feast on some high-priced spread. At least that’s what the federal complaint says, if Spitzer is indeed who the feds are calling “Client-9.”

Spitzer’s resignation won’t erase that blow to our tourism industry.

Let’s hope the next governor doesn’t go out of state to get his ashes hauled. If you can’t keep it in your pants, at least keep it in New York.

Details are numerous, but at the same time they’re hazy. The New York Times broke the story today, but the brothel operation Spitzer allegedly was hooked up was the Emperors’ Club, apparently in D.C., and it was the target of a federal complaint filed last week in New York’s Southern District.

Spitzer apologized mostly to himself in a hasty, brief press conference this afternoon. The 47-page criminal complaint is much juicier, if press reports are to be believed that Spitzer is who the complaint calls “Client-9.”

Hell, Spitzer even set up a tryst just before Valentine’s Day, if the complaint is to be believed.

Also from the complaint: “Client-9” left generous deposits with the hooker operation — no, not that kind, but the ones that ensure that you will leave that kind at some subsequent point.The governor is even quoted, again if you believe that he was indeed Client-9. From the complaint:
Lewis [one of the defendants, Temeka Rachelle Lewis, a k a “Rachelle] asked Client-9 what time he was expecting to have the appointment. Client-9 told Lewis maybe 10 p.m. or so, and asked who it was. Lewis said it was “Kristen,” and Client-9 said, “Great, OK, wonderful.”

It was at that point, the complaint says, that Client-9 haggled over how big a deposit to leave so that he could continue to make regular deposits.

Spitzer’s confessional confab with reporters wasn’t much. But this governor who has railed against moral turpitude will no doubt have to answer many more questions.

And all the skinny on The Emperor’s Club at The Smoking Gun.