SPORT : An Elegy for Skip Carey 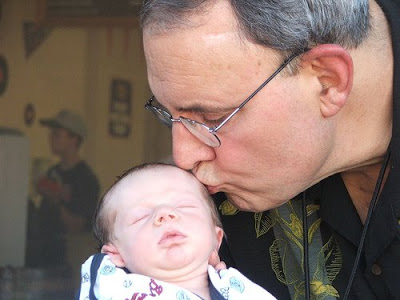 Atlanta Braves annuncer Skip Carey kissing a baby. Photo by jeffamandalayla.
‘There will be no more Skip Caray to bring me laughs and great baseball announcing in the summers’
By Gerry Storm / The Rag Blog / August 14, 2008

Back in the late ’70’s I was out every night on the music scene. When I would return home I would customarily turn on the TV to wind down for awhile before retiring. Not much on TV in the wee small hours so I started watching re-runs of Atlanta Braves games.

The team wasn’t much good but I really enjoyed the sharp wit of one of the Braves announcers, Skip Caray. So, night after night I would tune in the game and Skip and have some laughs. This became a habit. He was really good, irreverent and salty but quite knowledgeable. Definitely not your average sports announcer.

Ted Turner’s TV empire eventually grew to the point that it no longer needed to show all the Braves games twice to fill in air time, but it did show them nightly. I got a job which took me to the deep south for 5 years and took up temporary residence near Atlanta. I continued to listen to or watch the team and be entertained by Skip, even attended a few live games at the old stadium. Then the team got to be good, even won a World Series, with Skip and his sidekick Pete “The Professor” Van Weiren calling the shots, no longer from the cellar but from the top of the league. It was a grand time for Turnerville. The networks became first class, the team built a new stadium, winners every year, won their division 14 years in a row. I even wore a Braves cap for a few summers.

I wound up in deep New Mexico, still a Braves fan, but without a TV. Then the internet came along and sure enough, I could listen to the broadcasts through a stream broadcast. What a break! Skip and Pete were still at it and the Braves were a good team and these broadcasts became a regular part of my summer routine. Couple of years ago Skip got sick and missed several weeks. This was a void in my life. At the beginning of this season it was announced that he would no longer accompany the team out of town and no longer appear on TV, just radio for the home games. Last week he died, couple of years younger than me, salty and sharp to the end.

Now I definitely feel that the changes wrought by the passage of time are taking away my favorite people. There will be no more Skip Caray to bring me laughs and great baseball announcing in the summers. I will surely miss him, and suspect that this will be the last year I follow baseball, one of the joys of my life since age 8 or 9. So long, Skip, and thanks for 30 years of your wit and companionship