SPORT / Dave Zirin : Fox Be Damned, It Was a People’s Victory 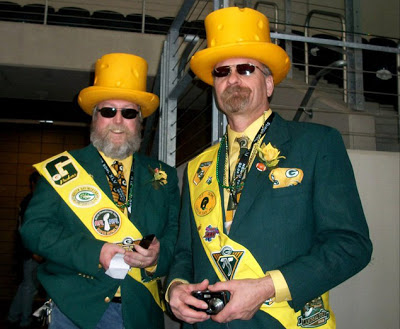 Packers fans. Image from D.
Fox be damned:
Why a Packers victory is a people’s victory

The 2011 Super Bowl was between the Green Bay Packers and the Pittsburgh Steelers — two squads whose monikers speak to their roots as factory teams in the industrial heartland.

As these teams prepared to face-off in the almighty spectacle that is the Super Bowl, the game’s pre-game show involved a salute to Ronald Reagan on his 100th birthday. Considering how Reagan gutted the aforementioned industrial heartland, a more appropriate pre-game show would have been an intimate meeting at the 50 yard line between a Reagan-disguised tackling dummy and fearsome Steeler James Harrison.

The Black Eyed Peas at halftime, however, made me long for another Reagan tribute. It was also Bob Marley’s birthday and I’m going to guess that far more Super Bowl parties in this country reflected Marley’s legacy than Reagan’s.

But it wasn’t just the film tribute that reminded viewers of the Reagan 1980s. The sheer tonnage of militaristic bombast with patriotic trimmings was like Top Gun on steroids and might have seemed over the top to the Gipper himself.

Viewers were treated to a reading of the Declaration of Independence, coupled with Marines marching on the field, coupled with that twit from Glee singing America the Beautiful, coupled with more shots of the troops, coupled with a damaged Christina Aguilera stumbling through the National Anthem.

By the time it was done, I was ready to get an American Flag tattoo and send my taxes to Hosni Mubarak like a Fox-Approved Good American. But fortunately for my sanity, I was watching the game with the DC Chapter of Iraq Veterans Against War at their annual Demilitarized Super Bowl Party.

The vets, who booed every time Fox tried to use the troops to build its brand, made it clear that real war in Iraq and Afghanistan doesn’t have a damn thing to do with what the broadcast was selling. As Geoff Millard of Iraq Vets Against the War said to me, “We love sports but hate the way it’s used and hate the way the soldiers are used to sell war.” 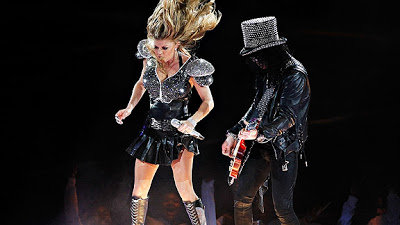 According to Rolling Stone, Super Bowl XLV hosted “The Ghastliest Half-Time Show in Sports History.”
And yet somewhere amidst the noise, the smoke, the Reagans, and the Black Eyed Peas, a football game actually broke out and it was a dandy. In no Super Bowl has a team ever come back from more than a 10-point deficit — and before you could blink the Steelers were down 18, 21-3. This was thanks to two costly interceptions by Pittsburgh quarterback and twice-accused rapist Ben Roethlisberger. An electric interception return for a touchdown by Green Bay safety Nick Collins reminded a lot of us why we love this game in the first place.

But Pittsburgh is a team with two dozen players who were part of their Super Bowl championship team two years ago and they refused to quit. The game winded down with Green Bay leading 31-25 and Pittsburgh having the ball with just two minutes to play. Green Bay’s defense held and a fantastic game ended as the Pack came away with the win. Packer quarterback Aaron Rodgers was absolutely brilliant, completing 24-of-39 passes for 304 yards, three touchdowns, no interceptions, and winning the MVP.

Yet for all the celebration of the Packers and their history, there was one brazen decision made by the show’s producers and announcers Joe Buck and Troy Aikman that was an insult to everything the team stands for.

Super Bowl coverage often includes numerous shots of the two teams’ owners fretting in their luxury boxes like neurotic Julius Caesars. But the Packers are a team without an owner. They’re a community-run non-profit owned by 112,000 fans. Rather than celebrate that fact, Fox didn’t mention the Pack’s unique ownership structure once. They also then didn’t include shots of the Rooney family, the most celebrated ownership family in the NFL.

After the game, during the traditional passing of the Lombardi Trophy to the winning team’s owner, the award was handed to the Packers’ “CEO and Chief Executive Officer” Mike Murphy who barely looks old enough to shave. NFL Commissioner Roger Goodell, as he threatens to lock the players out, clearly wants to hide the truth that the Packers have no single billionaire owner.

They want it hidden because the team from Green Bay stands as a living, breathing example that if you take the profit motive out of sports, you can get more than a team to be proud of: you can get a Super Bowl Champion.

It ain’t Tahrir Square, but it’s something — in our over-corporatized and hyper-commercialized sports world — to cheer. It is reason enough to celebrate the fact that the Lombardi Trophy has finally come home to Titletown.

[Dave Zirin is the author of Bad Sports: How Owners are Ruining the Games we Love (Scribner). Contact him at edgeofsports@gmail.com. This article was also posted to The Notion, The Nation‘s group blog.]

3 Responses to SPORT / Dave Zirin : Fox Be Damned, It Was a People’s Victory