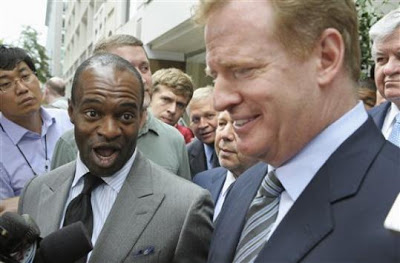 A sports media consensus on the end of the NFL lockout has already emerged. Like six-year-old kids getting trophies after soccer practice, everyone’s a winner. As Don Banks at Sports Illustrated assessed, thrilled that the golden goose will lay eggs another day, “Neither side got everything they wanted, but good negotiations are like that. Now that this CBA fight is almost over, and labor peace seems finally at hand, both the players and the owners have the right to claim success.”

These parroted assessments, by focusing on the final score, miss the true, overarching story of the longest work stoppage in NFL history: at the opening kickoff, the sides weren’t close to evenly matched. I think that what the NFLPA has done is the equivalent of the Bad News Bears squeaking out a victory against the 1927 New York Yankees. It’s The Haiti Kid taking down King Kong Bundy. It’s workers, in an age of austerity, beating back the bosses and showing that solidarity is the only way to win.

When the lockout began, NFL’s owners had, in their judgment, and frankly mine as well, every possible advantage. They had a promise from their television partners of $4 billion in “lockout insurance” even if the games didn’t air. They had a workforce with a career shelf-life of 3-4 years, understandably skittish about missing a single paycheck. And most critically, they had what they thought was overwhelming public opinion.

After all, in past labor disputes fans sided against those who “get paid to play a game.” Owners wanted more money and longer seasons and approached negotiations with an arrogance that would shame a Murdoch spawn.

I remember talking to NFLPA Executive Director DeMaurice Smith at the start of this process, and hearing his optimism in the face of these odds, as he spoke of the bravery of workers in Wisconsin and the people of Egypt who he said were inspiring him to fight the good fight. He mentioned the books he was reading like the classic civil rights history Parting the Waters: America in the King Years by Taylor Branch. I remember smiling politely at De Smith and thinking, “This guy is going to get creamed.”

I was very wrong. I didn’t count on Judge David Doty, a Reagan appointee, putting an injunction on that $4 billion lockout slush fund, taking away the owner’s financial upper hand. I didn’t count on the way that health and safety issues would bond the players together, making defections among the 1,900 players nonexistent.

I didn’t count on the way many fans, upset at the lockout and well-educated on the aftereffects of the brutality of the sport, would side with the players. And last, I didn’t count on the way that reservoirs of bitterness felt by NFL players and the union would bind them together against NFL Commissioner Roger Goodell and an ownership group that had just lied to them once too often.

They stuck it out and now the end results of the Collective Bargaining Agreement look quite good for players. We are looking at a 10-year CBA in which minimum salaries will go up 10% a year for the life of the agreement. Players get a slightly lower % of revenues (about 46% down from 50%), but they will receive 55% of future national media revenue, which, will mushroom in the years ahead. Teams also will now have to spend at least 90% of the salary cap on actual salaries. In other words, there won’t just be a salary cap there will be a salary floor.

In return, rookies will need to sign four-year contracts that are scaled at a lower rate. The net affect of all of this is that veteran salaries will go up, perhaps quite dramatically, and, if players can stay healthy beyond that fourth year, they will be very well compensated.

But there’s the rub. If the average career is only 3.4 years, how can players be ensured to stay healthy enough to get the big payday? Here is where I think the NFLPA made the most headway. Not only did they beat back the owner’s dream of an 18-game season, they also negotiated a much less arduous off-season regimen.

The off-season program will now be five weeks shorter. There will be more days off. Full-contact practices are going to be greatly curtailed. This matters because it will limit not just the wear and tear on players bodies, but also concussions and other brain injuries which are far more likely to happen in repetitive drills than in games.

Also, when careers finally do end, players can now be a part of the NFL’s health plan for life. This is a mammoth deal for players who previously were kicked off of all plans five years after retirement. Getting private insurance after playing in the NFL is a nightmare, as your body is a spiderweb of preexisting conditions. Retirees also will now receive up to a $1 billion increase in benefits, with $620 million going to increasing pensions for those who retired before 1993.

Yes, owners received a bigger piece of the pie, and yes they received their rookie pay scale. Yes, I agree with Brian Frederick, director of the Sports Fans Coalition, who commented that it’s a problem that “Fans were forced to sit on the sidelines during these negotiations, despite the massive public subsidies and antitrust exemptions we grant the league.”

This is especially true given the fact that, as SFC reported, “Thirty-one of the 32 NFL stadiums have received direct public subsidies. Ten of those have been publicly financed and at least 19 are 75% publicly financed.”

But in the end, this deal — against all odds — is a victory for players, their families, their health, and their long-term financial solvency. It’s also an example for workers across the country. There is power in labor and there is power in solidarity.