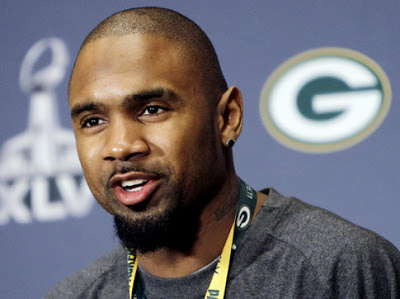 Packers union rep Charles Woodson: Standing with organized labor in Wisconsin. Photo by Gay /AP.
Strange bedfellows:
Why the Packers back the protesters

After a 30-year erosion of power, influence, and numerical strength, a period of reckoning has arrived for organized labor, and the terms of the debate couldn’t be starker. It’s not wages or benefits that are being negotiated in the twenty-first century. It’s whether labor unions — and the basic protections they bring — will exist at all.

This can be seen dramatically in the two most high-profile labor disputes in the country, disputes that on their face couldn’t seem more different. There are the public-sector workers of Wisconsin — the teachers, ambulance drivers, and child-care workers — trying to fend off Governor Scott Walker’s efforts to legislate them out of existence. Then there are the N.F.L. players, facing an imminent lockout if they don’t accept massive wage cuts and a longer season.

It seems almost comical to compare the two: after all, in Wisconsin, public-sector workers are attempting to defend decent-paying jobs that they can keep for decades and then retire with a sense of security. In the N.F.L., the Players Association is attempting to defend lucrative careers that last on average three and a half years, have a hundred per cent injury rate, and will statistically result in death 20 years earlier than the typical American male.

But both face someone across the negotiating table — Governor Walker or N.F.L. Commissioner Roger Goodell — who questions their right to exist and their right to organize. They are reading from the same neoliberal playbook, and the only difference is that Goodell actually has a college degree and is probably just savvy enough not to take a prank call supposedly from one of the Koch brothers. (When I was in Madison last week, I saw 20 eight-year-olds with a banner that read, “Scotty is as smart as my potty.”)

Goodell and the N.F.L. owners are guaranteed network-television and sponsorship money whether there are any games this year or not. That’s why the owners, with nary a dissent, have announced that they are ready and willing to lock the doors, even if it forces the union to decertify and they lose the season.

But repression creates bizarre bedfellows. And one of the most bizarre, at least superficially, has been the support for the striking public workers from the N.F.L. Players Association and the Green Bay Packers.

The Packers won the Super Bowl a few weeks — and for the state, several lifetimes — before the explosion in Wisconsin. Scott Walker, just days before he threatened to call in the National Guard on the state’s workers, immediately declared February “Packers month.”

But the Packers are more than the closest thing the state has to an official religion. They are the only non-profit, fan-owned team in all of major U.S. professional sports. This is a team with 112,000 owners. When they won the Super Bowl, their coach, Mike McCarthy, said, “We’re a community-owned football team, so you can see all the fingerprints on our trophy.”

We know that it is teamwork on and off the field that makes the Packers and Wisconsin great. As a publicly owned team we wouldn’t have been able to win the Super Bowl without the support of our fans. It is the same dedication of our public workers every day that makes Wisconsin run…

But now in an unprecedented political attack Governor Walker is trying to take away their right to have a voice and bargain at work. The right to negotiate wages and benefits is a fundamental underpinning of our middle class. When workers join together it serves as a check on corporate power and helps ALL workers by raising community standards.

Rookie tight end Tom Crabtree tweeted, “i fully support wi unions and i think Gov. Walker is out of his damn mind.”

None of these players has a particularly high profile. But as the struggle intensified, the team’s defensive captain, Charles Woodson, couldn’t stay silent, as I reported in The Nation.

A former Heisman trophy winner at the University of Michigan, N.F.L. defensive player of the year, and perennial pro-bowler, Woodson is also the team’s co-captain and union rep. His words landed in sports pages around the country:

Thousands of dedicated Wisconsin public workers provide vital services for Wisconsin citizens. They are the teachers, nurses and child care workers who take care of us and our families. These hard working people are under an unprecedented attack to take away their basic rights to have a voice and collectively bargain at work.

It is an honor for me to play for the Super Bowl Champion Green Bay Packers and be a part of the Green Bay and Wisconsin communities. I am also honored as a member of the NFL Players Association to stand together with working families of Wisconsin and organized labor in their fight against this attempt to hurt them by targeting unions. I hope those leading the attack will sit down with Wisconsin’s public workers and discuss the problems Wisconsin faces, so that together they can truly move Wisconsin forward.

Immediately, across Web message boards came the familiar notion that he should just “shut up and play.” As one person wrote, “Stay out of it, Charles. Keep your mouth shut and do what you do best — just win.”

But as Woodson must realize, and as the wise, august message-board commenter clearly does not, this isn’t a moment for any pro football player to just know his place and shut his mouth. It’s about solidarity that both sides desperately need. Two very different labor forces both are facing battles for their respective futures against bosses that see them as expendable. It’s the twenty-first-century fight: from the Governor’s office to the gridiron.

[Dave Zirin is the author of Bad Sports: How Owners are Ruining the Games we Love (Scribner) and just made the new documentary Not Just a Game. Contact him at edgeofsports@gmail.com. This article also appears in The New Yorker blog, The Sporting Scene.]