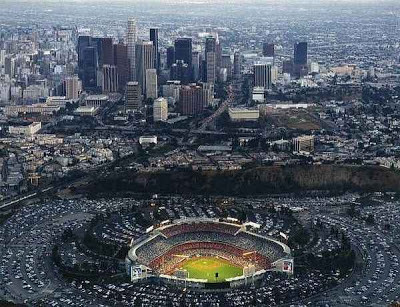 Dodgers Stadium. Image from Seitivinsfa.
One, two, many Green Bays…
Taking back the Los Angeles Dodgers

On Friday, I wrote a piece for the Los Angeles Times that put forward a common-sense solution to the current ownership disaster that is the Dodgers franchise: public ownership. Last week, Commissioner Bud Selig and Major League Baseball took the unprecedented step of seizing the team from bankrupt chief executive Frank McCourt.

In my column, I asked the question: instead of now selling off this historic franchise to the highest bidder, why not allow the fans to be the new bosses? What if Commissioner Bud Selig and Major League Baseball pursued the solution — that has been so successful for the Green Bay Packers — public ownership?

The Dodgers faithful could buy shares in the squad. Then — like in Green Bay — 60% of concessions could go to local charities, premium tickets could be made affordable to working class Angelenos, and one of baseball’s most storied teams could repair its ruptured relationship with an alienated fan base.

Let Los Angeles be a baseball town again. Let them truly be the people’s team.

It’s unlikely that Major League Baseball or the sclerotic Selig would want any of this. After all, since 1961, it’s been written explicitly in the league’s bylaws that fan ownership is as forbidden as the spitball or aluminum bats.

Selig sees his number one job as protecting the profits and interests of ownership — not safeguarding the best interests of the game. Proclaiming to the world that fans can own a team and sports owners are superfluous creatures runs counter to Selig’s very DNA. In other words, I didn’t expect the suggestion to gain much traction at MLB central.

But I also didn’t expect Los Angeles Councilwoman Janice Hahn to step up to the plate and swing for the cause. Hahn, the daughter of former City Supervisor Kenneth Hahn, is now running for US Congress. The day following publication, Hahn cited my piece in the LA Times on her campaign website and issued the following statement:

The Dodgers have been previously owned by FOX and the McCourt family, it is clear that the only ones who have the teams best interest at heart are the fans. If elected to Congress, I will introduce an amended version of the “Give Fans A Chance Act” which would allow Major League Baseball teams to be owned and operated by their fans, much like the Green Bay Packers are structured today.

This is an idea whose time has come. Major League Baseball for years has relied on public subsidies to make mountainous profits. We have collectivized the debt and privatized the profit for years in operating the National Pastime. But now, as our states face historic cuts, it’s time for payback.

Just a percentage of the revenue from merchandise sales could help save the hundreds of art and music teachers being pink-slipped right now. At my small school for at-risk kids, art is one of the main tools that keeps students engaged and practicing higher-order thinking. And we’re losing our art teacher.
Then there’s physical education. Maybe Dodger revenue could help us to develop world-class sports programs, rather than cutting them. When I was a public school student, girls’ sports were crucial for me during those formative years of self-esteem development. I’m scared that a whole generation of girls (and boys) will suffer the effects of not having those opportunities.

The only way this option could be pursued is with a tremendous amount of pressure. This pressure needs to be of two kinds: popular, fan-based pressure on Major League Baseball, and political pressure on — and through — the political powers in LA and California. People should rally, fans should hold up signs, politicians should be questioned, and every union in greater Los Angeles should back Councilwoman Hahn’s call.

The Bud Selig alternative involves selling off the team to the highest bidder, with no guarantees this broken franchise would even stay in Los Angeles. On April 24 Selig announced that former member of the George W. Bush inner circle and Ambassador to Japan J. Thomas Schieffer would be running the team. This is not the right direction for the team or the city. The answer lies not in Bush-Land, but Green Bay.

It should be noted that this franchise was founded when it was stolen from the people of Brooklyn, Then the actual Dodgers Stadium was built on the original sin of the Chavez Ravine land grab. At that time, Chavez Ravine was a beloved residential community of Chicanos known to all as “the poor man’s Shangri La.”

Shangri-La was seized by the state and handed over to owner Walter O’Malley. Second base now sits on what was once someone’s house. It’s long past time we take the team back. Doing so would rectify the past, aid the present, and maybe play a part in changing the future.

[Dave Zirin is the author of Bad Sports: How Owners are Ruining the Games we Love (Scribner) and just made the new documentary Not Just a Game. Contact him at edgeofsports@gmail.com. This article was first published at The Nation. Read more articles by Dave Zirin on The Rag Blog.]