SPORT / Dave Zirin : The Player’s Tweet that Told the Truth 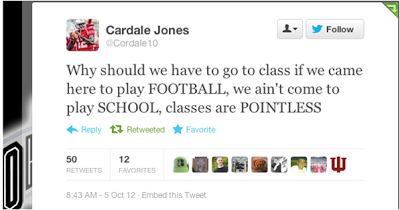 Cardale Jones’ revealing tweet. Image from BigLeadSports.
The smartest, or dumbest,
(or maybe smartest)
tweet an athlete ever sent

We are corrupting these young people by demanding that they become complicit in a sham.

Many allegedly great minds from professors to school presidents have devoted peals of pages to the multi-billion dollar industry otherwise known as NCAA athletics. Yet no one has quite put their finger on the contradictions, frustrations, and tragicomedy of being the labor in this industry — a so-called student-athlete — quite like Ohio State’s third string freshman quarterback, Cardale Jones.

On Friday Jones tweeted, “Why should we have to go to class if we came here to play FOOTBALL, we ain’t come to play SCHOOL, classes are POINTLESS.”

Jones immediately deleted the tweet — as well as his entire twitter account — but as many have learned before him, deleting a tweet is like cleaning a grease stain with fruit punch. As soon as the 18-year-old sent his tweet out into the world, Cardale Jones was held up as yet another example of (altogether now) “everything that’s wrong” with today’s athlete.

Even worse, Jones, who hasn’t played one snap all season, was benched for Saturday’s game. As the Toledo Blade put it, “Mark it down as DNP (tweet).

But Jones’s crime wasn’t authoring what the Daily News called a “lame-brained tweet.” It was committing, to paraphrase Michael Kinsley, the greatest sin in sports: he was caught telling the truth. “We ain’t come to school to play classes” will most likely be a quote of mockery that rings through the ages.

But Cardale Jones has also hit on something factual. Ohio State football, like a select sampling of the sport’s aristocracy, has morphed over the last 30 years into a multi-billion dollar business. Even in the shadow of sanction and scandal, according to Forbes Magazine, the Buckeyes program creates $63 million in revenue every year and accounts for 73% of all the athletic departments profits.

Columbus is where legendary coach Woody Hayes was pushed out after striking an opposing player in 1978. He was making $40,000 a year when removed. Their coach today, Urban Meyer, draws a base salary of $4 million and is the highest paid public employee in the state. Meyer also gets use of a private plane, a swanky golf club membership, and a fellowship in his name. He can also earn six figure bonuses as well as raises for staying on the job.

The source of the contradictions and confusion that create this moral cesspool is not the riches earned by the Urban Meyers of this world. It’s that the players are given nothing but the opportunity for an education they often have neither the time nor desire to pursue.

These are 18-22-year-olds treated like a hybrid of campus Gods and campus chattel. I once had a former All-American tell me a story of hitting the books until an assistant coach stopped by his dorm room and said, “You know you don’t have to do that right?” This particular athlete persevered and graduated and good for him.

I can only say that when I was 19, if an authority figure told me I didn’t have to study, I would have held an impromptu book-burning in my dorm room. We are corrupting these young people by demanding that they become complicit in a sham. We are telling them to be grateful for the opportunity to be party to their own exploitation. We are telling them effectively to do exactly what Cardale Jones said, and “play school.”

This mentality of “play school” and get a shot at the NFL or the NBA is profoundly effective. It acts as a form of discipline that keeps players in line. This discipline doesn’t only come from coaches, academic advisors, and family members, but other student-athletes as well.

A culture is created through “amateur athletics” that incentivizes keeping your head down. If you’re going to cheat, or take easy classes with compliant professors, you do it quietly and keep the trains running on time. One thing you don’t do is point out that the Emperor is buck-naked.

I have a friend who is a professor at Ohio State and he outlined this to me very clearly. He told me that in the wake of Cardale Jones’s tweet that “many student-athletes are enraged. They feel he makes them all look bad when all of them are busting their butts.”

Their anger is what allows this system to continue as sure as the NCAA. They are angry because Cardale Jones just pulled back the curtain on an NCAA moral terrain built on a 21st century bedrock of bewildering moral confusion.

This only changes if Jones’s fellow football players stand with him and ask the question: “Are we all just ‘playing school’ so Urban Meyer can live like some sort of absurdist sports Sultan? Are my blood sweat and tears first and foremost a means to pay for the fuel for my coach’s private plane?”

We don’t know if this will cost Cardale Jones his scholarship in the days to come. But one thing we can be sure about: whether or not he stays will have less to do with his effrontery than whether the freshman can effectively throw a football.

[Dave Zirin is the author of The John Carlos Story (Haymarket). Receive his column every week by emailing dave@edgeofsports.com. Contact him at edgeofsports@gmail.com. Read more articles by Dave Zirin on The Rag Blog.]

1 Response to SPORT / Dave Zirin : The Player’s Tweet that Told the Truth