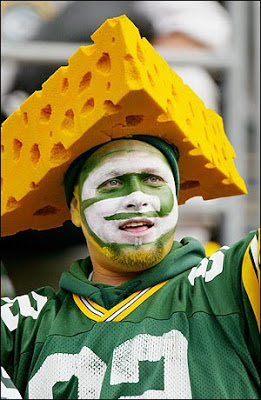 NFL owner? Image from Green Bay Packer Nation.
The team without an owner:
Those nonprofit Packers

It’s a beautiful story but it’s one that the N.F.L. and Commissioner Roger Goodell take great pains to hide.

In a season where N.F.L. owners have steadily threatened to lock out the players next year unless they secure more profits in the next collective bargaining agreement, it’s poetic justice to see the Green Bay Packers, the team without an owner, make the Super Bowl. Actually, it’s not quite accurate to say the Packers are without an owner. They have a hundred and twelve thousand of them.

The Packers are owned by the fans, making them the only publicly owned, not-for-profit, major professional team in the United States. The Pack have been a fan-owned operation since the primitive pro football days of the 1920’s, when N.F.L. teams could be won in card games and no one foresaw the awesome power this sport would hold over both the American imagination and the American wallet.

In 1923, the Packers were just another hardscrabble team on the brink of bankruptcy. Rather than fold they decided to sell shares to the community, with fans each throwing down a couple of dollars to keep the team afloat. That humble frozen seed has since blossomed into a situation wherein more than a hundred thousand stockholders own more than 4 million shares of a perennial playoff contender.

Those holding Packers stock are limited to no more than two hundred thousand shares, keeping any individual from gaining control over the club. Shareholders receive no dividend check and no free tickets to Lambeau Field. They don’t even get a foam cheesehead. All they get is a piece of paper that says they are part-owners of the Green Bay Packers. They don’t even get a green and gold frame for display purposes.

The shareholders elect a board of directors and a seven-member executive committee to stand in at N.F.L. owners meetings. But football decisions are made by General Manager Ted Thompson, perhaps the luckiest and happiest G.M. in sports. This structure allows Thompson to execute decisions, even unpopular ones, without an impatient, jittery billionaire breathing down his neck.

Since his hire in January 2005, Thompson has made his share of controversial moves. But unlike his G.M. brethren around the league, who carry little or no job security, Thompson has been given the space to see his moves succeed or fail on their own accord. It was Thompson who decided to jettison legendary quarterback Brett Favre in 2008 for the unproven but younger and considerably lower maintenance Aaron Rodgers. Today, Favre is officially (we hope) retired and Rodgers stands at the pinnacle of his sport.

The Packers’ unique setup has created a relationship between team and community unlike any in the N.F.L. Wisconsin fans get to enjoy the team with the confidence that their owner won’t threaten to move to Los Angeles unless the team gets a new megadome. Volunteers work concessions, with 60 percent of the proceeds going to local charities. Even the beer is cheaper than at a typical N.F.L. stadium.

Not only has home field been sold out for two decades, but during snowstorms, the team routinely puts out calls for volunteers to help shovel and is never disappointed by the response. It doesn’t matter how beloved the Cowboys are in Dallas; if Jerry Jones ever put out a call for free labor, he’d be laughed out of town.

Here are the Packers: financially solvent, competitive, and deeply connected to the hundred thousand person city of Green Bay. It’s a beautiful story but it’s one that the N.F.L. and Commissioner Roger Goodell take great pains both to hide and make sure no other locality replicates.

It’s actually written in the N.F.L. bylaws that no team can be a nonprofit, community-owned entity. The late N.F.L. commissioner Pete Rozelle had it written into the league’s constitution in 1960. Article V, Section 4 — otherwise known as the Green Bay Rule — states that “charitable organizations and/or corporations not organized for profit and not now a member of the league may not hold membership in the National Football League.”

I talked with Rick Chernick, a member of the Packers board of directors, about whether other communities should challenge the N.F.L. constitution and be like Green Bay. Chernick expressed doubt, saying:

I’m just not sure in today’s day and age a team could follow the Packer way. The cost of ownership is a ton today, thus being almost an impossible task without deep pockets. Green Bay is truly a special, special situation.

Chernick makes a valid point. But there is a strong counterargument as well. It may be exorbitantly expensive to run a team, but people don’t buy N.F.L. teams as a civic service. Being an N.F.L. owner is like having a license to print money. Television contracts alone run in the billions, with the 2006-2011 contracts valued at approximately $3 billion annually, $800 million more than the previous contracts. In addition, N.F.L. teams have received $6 billion in public funds to build the current crop of stadiums.

In other words, the public is already shouldering a great deal of the cost and debt for N.F.L. franchises. But these public dollars, through some sort of magic alchemy, morph into private profits that often flow away from the communities that ponied up the dough. In the United States, we socialize the debt of sports and privatize the profits. Green Bay stands as a living, breathing, and, for the owners, frightening example, that pro sports can aid our cities in tough economic times, not drain them of scarce public resources.

Fans in San Diego and Minnesota, in particular, where local N.F.L. owners are threatening to uproot the home teams and move them to Los Angeles, might look toward Green Bay and wonder whether they could do a better job than the men in the owner’s box. And if N.F.L. owners go ahead and lock the players out next season, more than a few long suffering fans might look at their long suffering franchises and ask, “Maybe we don’t need owners at all.” It has worked in Green Bay — all the way to the Super Bowl.

[Dave Zirin is the author of Bad Sports: How Owners are Ruining the Games we Love (Scribner). Contact him at edgeofsports@gmail.com. This article was also posted to The New Yorker online.]