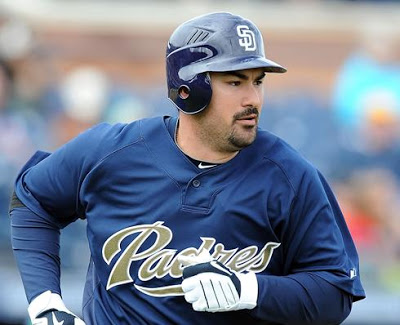 Adrian Gonzales decided not to boycott; will he do something to make a statement at the game? Photo by Lisa Blumenfeld / Getty Images.
Why I’m boycotting Tuesday’s
All-Star Game in Arizona

Over the last year, civil rights organizations, politicians, sportswriters, and baseball players have asked Major League Baseball Commissioner Bud Selig to move Tuesday’s 2011 All-Star Game out of Arizona. He chose not to listen and now I choose not to watch. If I lived within a day’s travel of Arizona, I’d be choosing to protest at the stadium gates.

Ever since Arizona passed its darkly punitive racial profiling law SB 1070, thousands of people have pleaded with Selig to do the right thing and move the game. Baseball is 27.7% Latino. It’s a sport dependent on Latin American talent from the baseball academies of the Dominican Republic to today’s biggest stars, Albert Pujols and Adrian Gonzalez. Even more, Major League Baseball has prided itself — and marketed itself — on historically being more than just a game.

Bud Selig, in particular, is a man, who publicly venerates the game’s civil rights tradition. Jackie Robinson’s number is retired and visible in every park and the great Roberto Clemente in death has become a true baseball saint. But Selig’s inaction makes his tributes to the past look as hollow as Sammy Sosa’s old bat.

Selig clearly loves the symbolism of civil rights more than the sacrifice. The presence of the game will mean a financial windfall for the state as well as for Arizona Diamondback owner Ken Kendrick. Kendrick is a first-tier right wing money bundler who has let the state politicians behind SB 1070 use his owner’s box for fundraisers.

The game will also mean a national spotlight for the vile Sheriff Joe Arpaio of Arizona’s Maricopa County, our 21st century Bull Conner. Arpaio has been threatening to bring down his pink-clad chain gang to clean up outside the stadium.

Selig is not the only one backing down from the moment. The Major League Players Association issued a very strong statement last year against SB 1070 and hinted that a boycott might be in the cards, saying they would “consider additional measures to protect the interests of our members.” Earlier this week, after months of silence, Executive Director Michael Weiner said, “SB 1070 is not in effect and key portions of the law have been judged unlawful by the federal courts. Under all the circumstances, we have not asked players to refrain from participating in any All-Star activities.”

To say SB 1070 “is not in effect” is sophistry. Only a section of SB 1070 has been judged unlawful: the extension of police powers to demand papers without cause. Other aspects are now on the books, including stiffer penalties for “illegals” and giving citizens the right to sue any city that sets up safe havens for immigrants. In addition, State Governor Jan Brewer is currently appealing the pruning of SB 1070 directly to the U.S. Supreme Court. Also, the law has spawned copycat legislation is states around the country.

My own discussions with Arizona activists tell me that racial profiling has been rampant since the law passed, with Latinos, legal and illegal, in fear to call the police or the fire department, or even attend church. Even if you agree with Michael Weiner, as he writes that immigration matters “will not be resolved at Chase Field, nor on any baseball diamond,” the MLBPA is being remarkably cavalier about its responsibility to “protect its members.”

As for the players, a massive number are bowing out of this year’s game. Is this because of SB 1070? We don’t know, but either way a weakened product will be on display Tuesday night.

If the spotlight shifts to anyone on the field, it will be centered on Boston’s All-Star first baseman Adrian Gonzalez who changed his position a year ago that he wouldn’t play if the game were in Arizona. There is a movement to have players like Gonzalez, sympathetic to the cause, to wear a ribbon or make some kind of statement. We will see if Adrian Gonzalez takes advantage of the spotlight.

But in the end, responsibility for this debacle rests with Selig. NFL owners, whom no one would confuse with the NAACP, threatened to pull the 1993 Super Bowl out of Arizona if the state continued to refuse to recognize Martin Luther King’s birthday as a national holiday. Now, 20 years later, baseball’s commissioner does nothing.

Yes, Bud Selig would undoubtedly have received an avalanche of criticism if he had moved the game. That’s what it means to actually sacrifice something for the sake of the civil rights he claims to hold so dear. Instead, his legacy will bear another blot, joining the steroid boom, the cancellation of the 1994 World Series, and the gouging of state economies with tax-payer funded stadiums.

Now Bud Selig can always be remembered as the Seinfeld of sports commissioners: the man who did nothing; the man who, with the game on the line, kept his bat on his shoulder and took a called third strike.