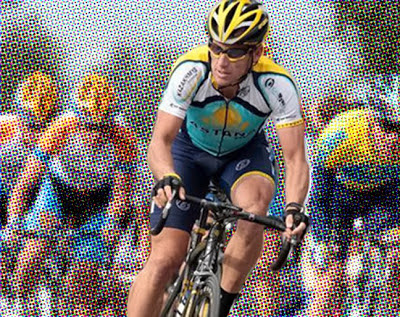 Armstrong doesn’t just have defenders. He has, in the legions of cancer survivors across our toxic nation, an army.

Seven-time Tour de France winner and Austin resident Lance Armstrong is now facing the systematic disemboweling of his legacy as an athletic icon.

As revealed Sunday on 60 Minutes — a show that usually doesn’t do sports features unless there’s a synergistic tie-in with CBS Sports — three of Armstrong’s teammates have testified to a federal grand jury that they saw the great cyclist take performance-enhancing drugs. Armstrong’s top “lieutenant” Tyler Hamilton said, “He took what we all took… There was EPO, there was testosterone. And I did see a transfusion, a blood transfusion.”

60 Minutes also broke the news that George Hincapie, Armstrong’s closest friend and teammate, finally relented and testified to federal investigators. According to reporter Scott Pelley, Hincapie stated “that he and Armstrong supplied each other with the blood-booster EPO and discussed having used testosterone — another banned substance during their preparation for races.”

Hincapie is apparently shocked that his confidential grand jury testimony was leaked. He released a statement through his attorney where he said, “I can confirm to you that I never spoke with 60 Minutes. I have no idea where they got their information.” (Hincapie will be releasing his LiveNaïve rubber bracelets later this month.)

For what it’s worth, I find these federal grand juries aimed at “cleaning up sports,” a vulgar use of government power. In cycling, it’s particularly noxious. This is a sport that desperately needs organization and labor protections. Cyclists are pushed to extend their bodies beyond all possible human limits. Since 2000, 12 professional cyclists have died during races. Imagine the outcry if twelve NFL players had died on the field during the same time span.

Blood doping is a logical outcome of a sport where people push themselves to death for the enjoyment of fans and benefit of sponsors. Of the 70 top-10 finishers in Armstrong’s seven Tour De France victories, 41 have tested positive for PEDS.

That’s what happens when there is no legitimate union, commissioner, or controlling authority other than race organizers and sponsors — and highly competitive athletes pushing themselves at all costs to make it through the Pyrenees in one piece.

As for Armstrong, he has come out swinging with his typically furious denials, saying, “CBS’s reporting on this subject has been replete with broken promises, false assurances and selective reliance on witnesses upon whom no reputable journalist would rely.”

Armstrong has long insisted on his innocence and touted his reputation as “the most tested athlete on the planet.” Clearly he and the media believe his reputation as an athletic icon — like that of baseball greats Barry Bonds and Roger Clemens — is hanging by the thread. But unlike other athletes, Armstrong’s legacy is secure. That’s because his support comes from a far less fickle place than fandom.

In Robert Lipsyte’s recently released memoir An Accidental Sportswriter, the great columnist reveals that the only modern athlete who send his pulse racing is Armstrong. “He’s the closest thing I have to a celebrity jock hero,” says Lipsyte. This is a remarkable statement from a writer who is a great critic of that nexus of sports, media, and hero-worship that he brands “jock-sniffing.”

Lipsyte’s love was cemented when he heard someone ask Armstrong how his belief in God helped him beat cancer and Armstrong responded, “Everyone should believe in something, and I believe in surgery, chemotherapy, and my doctors.” Armstrong also believes that everyone should have access to the kind of medicine that allowed him to beat death. He’s helped raise, through his LiveStrong foundation with its ubiquitous yellow bracelets, more than $400 million dollars for medical research.

This is why Armstrong doesn’t just have defenders. He has, in the legions of cancer survivors across our toxic nation, an army. The Associated Press quoted cancer survivor and amateur cyclist Raifie Bass, who said,

Lance is a true inspiration for so many people. He’s just a person that really is a great motivator for me as a cyclist and as a cancer survivor. What Lance has done for the global message of cancer and awareness, it’s unstoppable… it’s not how many Tours he won or what he’s done for cycling. It’s what he’s done for cancer.

What a country. We have a federal government spending untold amounts to “clean up” performance enhancing drugs in cycling, targeting someone whose celebrity and efforts are critical in the fight against cancer.

How about we close down the grand jury and in return, cycling agrees to get a commissioner, a union, and a method to handle its own drug testing? How about we take the money being spent to find out what someone might have taken to survive these torturous races, and donate it to cancer research?

I’m sure federal prosecutors have other people’s garbage to sift through, and 60 Minutes could then be free to finish its hard-hitting story about what makes Roger Goodell so dreamy. But however this ends, I wouldn’t bet against Lance Armstrong. The LiveStrong Army is bonded by something stronger than sports… and stronger than the Feds.