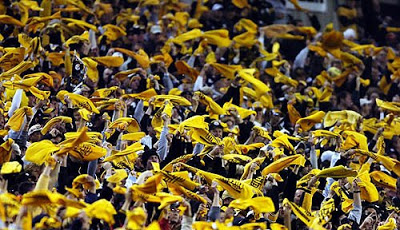 Packers fans shown waving “terrible towels.” No, wait a minute…
How about those… uh… Steelers?
By Sarah Wheaton / July 12, 2008

Terrible Towels are waving at half-staff today. It was only Wednesday when Senator John McCain was talking about how Pittsburgh’s beloved Steelers helped him get through his years in a North Vietnamese prison.

“When I was first interrogated and really had to give some information because of the physical pressures that were on me, I named the starting lineup — defensive line — of the Pittsburgh Steelers as my squadron-mates,” he told KDKA-TV in Pittsburgh, a city filled with the white, working-class voters who could be up for grabs in November (many of whom also happen to be diehard football fans).

But Mr. McCain evidently confused the Black and Gold with the Green and Gold. In his 1999 memoir, Mr. McCain wrote that he recited the names of Green Bay Packers. As sports fans were quick to point out, the Steelers version of Mr. McCain’s story just did not make much sense. Mr. McCain, a Navy brat, had no ties to Pittsburgh, and the team was in the middle of a streak of losing seasons in 1966, the year before he was shot down. Meanwhile, the Packers that season won the first Super Bowl. His campaign said it was simply a mistake.

This entry was posted in RagBlog and tagged McCain, Presidential Campaign, Sports. Bookmark the permalink.