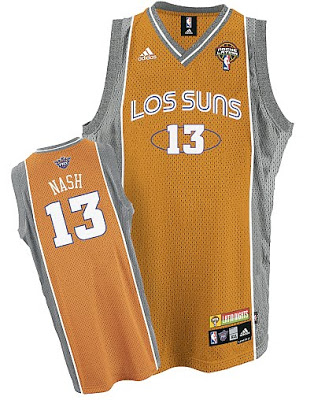 A battle has been joined for the very soul of Arizona. On one side, there are the Minutemen, the craven state Republican lawmakers, Governor Jan Brewer, and the utterly unprincipled John McCain, all supporting SB 1070, a law that codifies racial profiling of immigrants in the state. On the other are the Sun Belt residents who protested on May 1st, the students who have engaged in walkouts, and the politicians and civic leaders calling for an economic boycott of their own state.

This battle has also been joined in the world of sports. On one side is Major League Baseball’s Arizona Diamondbacks. Owned by state Republican moneyman Ken Kendrick, the team has drawn protestors to parks around the country. On the other side, we now have the Phoenix Suns.

On Tuesday the news came forth that tomorrow on Cinco de Mayo, the team would be wearing jerseys that say simply Los Suns. Team owner Robert Sarver said, after talking to the team, that this will be an act of sartorial solidarity against the bill. Their opponent, the San Antonio Spurs have made clear that they support the gesture.

In a statement released by the team, Sarver said,

The frustration with the federal government’s failure to deal with the issue of illegal immigration resulted in passage of a flawed state law. However intended, the result of passing this law is that our basic principles of equal rights and protection under the law are being called into question, and Arizona’s already struggling economy will suffer even further setbacks at a time when the state can ill-afford them.

He followed up the statement by saying to reporters,

I looked around our plane and looked at our players and the diversity in our organization. I thought we need to go on record that we honor our diversity in our team, in the NBA and we need to show support for that. As for the political part of that, that’s my statement. There are times you need to stand up and be heard. I respect people’s views on the other side but I just felt it was appropriate for me to stand up and make a statement.

After Sarver spoke out, the team chimed in against the passage and signing of SB 1070. Two-time MVP point guard Steve Nash, who in 2003 became the first athlete to go on record against the Iraq war said,

I think the law is very misguided. I think it is unfortunately to the detriment to our society and our civil liberties and I think it is very important for us to stand up for things we believe in. I think the law obviously can target opportunities for racial profiling. Things we don’t want to see and don’t need to see in 2010.

All-Star power forward Amare Stoudamire, who has no political reputation, also chimed in saying, “It’s going to be great to wear Los Suns to let the Latin community know we’re behind them 100%.”

After the story broke, I spoke on the phone with NBA Players Association President Billy Hunter about the Suns audacious move. He said,

It’s phenomenal. This makes it clear to me that it’s a new era. It’s a new time. Athletes can tend to be apolitical and isolated from the issues that impact the general public. But now here come the Suns. I would have expected nothing less from Steve Nash who has been out front on a number of issues over the years. I also want to recognize Amare. I know how strident Amare can be and I’m really impressed to see him channel his intensity. It shows a tremendous growth and maturity on his part. And I have to applaud Bob Sarver because he is really taking a risk by putting himself out there. I commend them. I just think it’s super.

He said that the union would have their own statement out by the end of the week.