St. Augustine of Hippo on the Practice of Torture 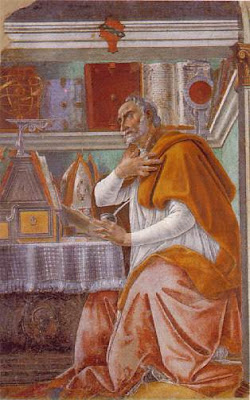 St. Augustine, as painted by the Italian painter Sandro Botticelli in 1480 / 1902encyclopedia.com.
St. Augustine on torture, with an afterword by Willie Nelson

Over 1,500 years ago Augustine of Hippo reflected on the practice of torture –- a topic in the public conversation today. His observations lead me to believe that the villains are not as small as Dubya, Cheney, and Rumsfeld, but may indeed be immersed in human nature itself. He frames the internal conflict as discernment between the perceived imperatives of worldly duty and the higher values of justice rendered to the dignity of mankind.

“Even when a city is enjoying the profoundest peace, some men must be sitting in judgment on their fellow men. Even at their best, what misery and grief they cause! No human judge can read the conscience of the man before him. That is why so many innocent witnesses are tortured to find what truth there is in the alleged guilt of other men. It is even worse when the accused man himself is tortured to find out if he be guilty. Here a man still unconvicted must undergo certain suffering for an uncertain crime –- not because his guilt is known, but because his innocence is unproved. Thus it often happens that the ignorance of the judge turns into tragedy for the innocent party.

There is something still more insufferable –- deplorable beyond all cleansing with our tears. Often enough, when a judge tries to avoid putting a man to death whose innocence is not manifest, he has him put to torture, and so it happens, because of woeful lack of evidence, that he both tortures and kills the blameless man whom he tortured lest he kill him without cause. And if, on Stoic principles, the innocent man chooses to escape from life rather than endure such tortures any longer, he will confess to a crime he never committed.”

If indeed the enemies of the brighter angles of human nature are more deeply rooted than the visible leaves and branches, then our effort is wasted in merely pruning them –- we must lay an axe to the root.

When we elect our representatives we have accomplished about 20% of the job. The remaining 80% is in seeing to it that they reflect our values. So many words through the centuries call our attention to the struggle between right and wrong.

But Perhaps Willie Nelson, Poet-Philosopher, put it best for us today in Turk Pipkin’s documentary, One Peace at a Time: “Right and wrong is not that hard, it’s just what we choose to do.”

This entry was posted in Rag Bloggers and tagged Philosophy, Torture. Bookmark the permalink.