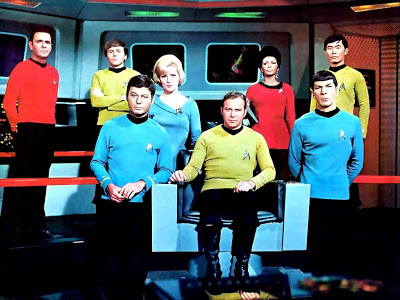 I grew up in the 1970s on reruns of the original Star Trek with Captain James Tiberius Kirk at the helm, backed by that ever logical Vulcan, Mr. Spock, Dr. “Bones” McCoy, and the rest of the intrepid, space-faring crew of the USS Enterprise. During the tumultuous 1960s, that sci-fi series — before being canceled — had pointed to a more promising future in which humanity would be united. Star Trek, after all, offered a vision of a post-racial society in which blacks and Asian-Americans would serve alongside whites as equals, and a post-nationalistic society in which Russian-accented Ensign Chekov could loyally follow a WASPy captain from Iowa.

Even as the Enterprise cruised the distant reaches of our galaxy, the show was distinctly a creature of its moment, of the tensions released by the rise of the civil rights movement and by the Cold War superpower standoff. Minorities were still struggling for equal rights when the first Star Trek aired in 1966, while the U.S. government was just putting the finishing touches on a nuclear command center buried under 2,000 feet of granite that was meant to ride out a possible apocalyptic Russian sneak attack. So, having a black female officer like Lieutenant Uhura and a Russian one like Chekov on the starship’s bridge certainly seemed like one small leap for mankind.

In a way, the Enterprise and its multi-national, alien-inclusive crew was the ultimate American melting pot (and, if you happened to be an aficionado of war films, the ultimate “lost patrol” as well). It was also “a wagon train to the stars.” At least that was how its creator here on Earth, Gene Roddenberry, pitched the series concept to TV network executives at the time. In the early 1960s, remember, such execs were accustomed to green-lighting Westerns like Gunsmoke or Bonanza with lily-white casts, not a sci-fi series set elsewhere in the galaxy with a multi-racial line-up.

Not surprisingly then, Roddenberry re-imagined space as the “final frontier” and sent Kirk and crew off each week, like so many American pioneers of earlier centuries, to “boldly go where no man has gone before.” They were to ride their high-tech wagon into the unknown in search of “new life and new civilizations.” Of course, exploring that final frontier could be dangerous, whether in the American West of the 1800s or hundreds of years later among the stars and planets of the Milky Way.

Accordingly, the Enterprise space wagon was heavily armed with phasers and photon torpedoes: precision weapons that, on rare occasions, may have missed their targets, but in the emptiness of space never left behind embarrassing collateral damage. Besides, wherever our heroic crew journeyed, the Prime Directive of the United Federation of Planets went with them. Peaceful exploration was the singular goal of the Federation, and General Order No. 1 precluded interference, even for humanitarian reasons, in the lives of any developing alien cultures that might be discovered.

Not that that stopped Captain Kirk and crew. They often found themselves in situations where, Prime Directive or not, they were forced to meddle in an alien society’s development. In the Star Trek universe, these attempts at social engineering — in our time they would be termed “humanitarian interventions” or “nation building” — usually yielded promising results. They certainly didn’t lead to the deaths of hundreds of thousands or the displacement of millions. Indeed, we rarely saw such dire results on the show precisely because, unlike American ground troops stationed on other “frontiers,” whether in the 1960s in Vietnam or today in Iraq and Afghanistan, the Enterprise and its crew could always head off at warp speed from ill-judged experiments in social and cultural engineering.

And this being an American vision of the future, even in space the Enterprise never lacked conflict with evildoers. The ship was almost constantly confronted by aggressively hostile aliens, most commonly the militaristic Romulans and Klingons. (In later versions of the series, created on Earth as the Cold War wound down and ended, the Klingons would eventually ally with the Federation and come on board the Enterprise.)

On Board the USS Ameriprise

Looking back at Star Trek, more than four decades after Roddenberry’s vision entered our homes, what’s remarkable is how much it captured a still extant American optimism and an American cultural smugness. The optimism today has been muted, but the smugness — not so much. After all, official American “expeditionary forces” continue to travel the “final frontiers” of our own planet, if not the galaxy, armed to the teeth with our own versions of phasers and photon torpedoes. At the same time, most of us continue to see ourselves as a peace-loving, Federation-like crew, a force for progress, for international cooperation, and above all for good.

Yes, our acts may — these days, more than occasionally — misfire (or quagmire), but our intentions are benevolent, motivated primarily by a desire to serve a higher purpose, even as we seek to enlarge our peaceful federation of allied nations. Unfortunately, like the Star Trek crew, Americans are meddlers. We want to help others even when they don’t want our help, even when our “help” is counterproductive to the normal development of other cultures and countries.

Worse yet: Despite our aspirations, the American spaceship of state — let’s call it the USS Ameriprise — not only resembles the USS Enterprise of the (mostly well-meaning but distinctly meddlesome) Federation, but also, on too many occasions, the Enterprise from a barbarous parallel universe pictured in “Mirror, Mirror,” an episode from the show’s second season.

In it, thanks to a “transporter” accident, four members of the Star Trek crew, including Captain Kirk, switch places with their evil twins and find themselves aboard the Imperial Star Ship (ISS) Enterprise. Among the ISS crew, might makes right. Alien cultures that refuse to provide scarce energy sources (the dilithium crystals that power the starship, not mundane oil as on this planet) are massacred and their resources stolen. Perceived mistakes by crewmembers are punished with “agonizers,” Taser-like miniature zappers applied to the chest just above the heart. Disloyal crewmembers are tortured to extract confessions, or simply slowly tortured to death, by being placed in “the agony booth.” The booth is the ultimate “stress position,” without all the inconvenience of shackles or the messiness of waterboarding. Officers advance in rank by assassination, with Kirk possessing the choicest precision weapon: a device in his quarters capable of killing any person on board with just the touch of a button.

Let’s recap: Alien cultures shocked, awed, and bludgeoned into submission in order to gain control over scarce energy resources; torture used liberally to extract information; precision weapons capable of decapitating the enemy and controlled from a distance via the push of a button.

It’s disturbing how closely the recent journeys of our Ameriprise have come to resemble those of that imperial Enterprise. Yet we’ve hardly seemed to notice, convinced as we were that our ship of state is still the good Enterprise, spreading democracy and freedom, even if meddling in other cultures as well. Perhaps we’ve forgotten that another way to express the wisdom contained in the Prime Directive is: “The road to hell is paved with good intentions.”

But let’s rejoin Kirk on the ISS Enterprise. Aghast to find himself surrounded by such barbarity, he adapts just enough to survive until he is able to rejoin the “good” universe. The question is: Can we, like Kirk, recognize and reject the barbarity around us, even as we resist the temptation to interfere in the lives of others, unless they well and truly ask for, and really need, our help?

Early signs are not good when it comes to the latest Obama-led Ameriprise. Our spaceship of state still seems remarkably addicted to phasers and photon torpedoes, an addiction we refuse to own up to, even as we send one variety of our own spaceships, which we call unmanned aerial drones, over the tribal lands of Pakistan and Afghanistan armed with Hellfire missiles. We also refuse to admit that we’re an imperial power, even as we build new military bases along the final frontiers of our planet, while our military seeks “full spectrum dominance” from the deepest oceans to “the shining stars and beyond” (as one U.S. Air Force advertisement recently put it). We demonize our enemies, turning them into so many Romulans, aliens who are incapable of understanding anything but the blunt, unsparing use of force.

When we look in the mirror, we want to see a peace-loving Federation member staring back at us, not a barbarian from the ISS Enterprise. I certainly do. But even the far friendlier visage of the benevolent Kirk and the logical Spock needs to be considered seriously and critically. For if the Captain and the Vulcan no more saw themselves as imperial meddlers than we normally do, they often found themselves fighting to expand the boundaries of their friendly Federation — and so do we.

In the long run, we may well be able to reject naked barbarity and lust for power. But can we resist the power of our own illusions, of the notion that, despite missteps, mishaps, and mistakes, we’re always a force for good in the world? Can we affirm our own Prime Directive — a reversal of our Monroe Doctrine that defined our boundaries in a different age and time — and vow not to meddle in the affairs of others? For our Ameriprise has its limits, as well as its own pressing problems to solve.

[William J. Astore, a retired lieutenant colonel (USAF), taught for six years at the Air Force Academy. A TomDispatch regular, he currently teaches at the Pennsylvania College of Technology and is the author of Hindenburg: Icon of German Militarism (Potomac Press, 2005), among other works. He may be reached at wastore@pct.edu.]