Stephanie Chernikowski : ‘Looking at Music: Side 2’ at the MOMA 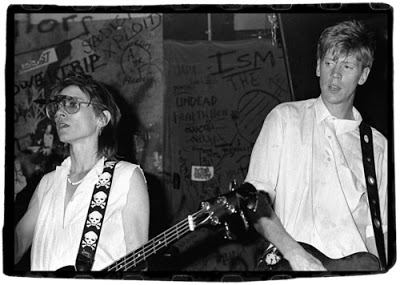 That is a very early shot of Kim Gordon and Thurston Moore of Sonic Youth playing at CBGB. They are both multi-talented, as are many of the artists in the show. Looking at Music: Side 2 examines a movement of downtown artists, musicians, photographers, and film makers who enjoyed breaking rules and usually did their art on the cheap. New York was broke and so were we. It sounds like a brilliant show and includes artists I really like — Patti Smith, Richard Hell, Jean-Michel Basquiat. I look forward to seeing it.
sc nyc 6.2009

Stephanie Chernikowski, a former denizen of the Sixties Austin artistic and literary bohemia who now resides in New York City, is featured in an exhibition at New York’s Museum of Modern Art (MOMA).

Stephanie Chernikowski moved to New York City from her native Texas on Columbus Day of 1975. She began working as a photojournalist shortly before her move and has continued to view life through a lens. Her concentration has been on 35mm black & white portraiture and documentation of the downtown music and arts scene, with occasional digressions.

The Museum of Modern Art presents Looking at Music: Side 2, a survey of over 120 photographs, music videos, drawings, audio recordings, publications, Super 8 films, and ephemera that look at New York City from the early 1970s to the early 1980s when the city became a haven for young renegade artists who often doubled as musicians and poets. Art and music cross-fertilized with a vengeance following a stripped-down, hard-edged, anti-establishment ethos, with some artists plastering city walls with self-designed posters or spray painted monikers, while others commandeered abandoned buildings, turning vacant garages into makeshift theaters for Super 8 film screenings and raucous performances.

Many artists found the experimental music scene more vital and conducive to their contrarian ideas than the handful of contemporary art galleries in the city. Artists in turn formed bands, performed in clubs and non-profit art galleries, and self-published their own records and zines while using public access cable channels as a venue for media experiments and cultural debates.

See the online interactive presentation of the works included in Looking at Music: Side 2, with a slideshow of selected highlights, interpretive texts, and original acoustiguide conversations recorded for the exhibition. The site will launch by June 17, 2009.

Go to MOMA’s public flickr page for Looking at Music: Side 2.