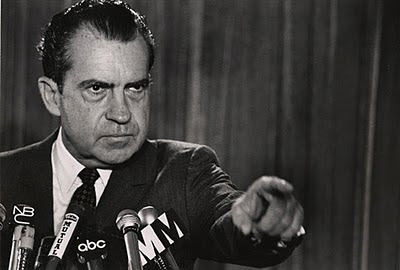 Richard Nixon: “I am not a crook!”
Scandalgate

The Citizens United case has put us in a situation where Watergate is such small potatoes that it’s almost quaint.

Luke Russert, son of the late and much admired journalist Tim Russert, recently referred to Watergate as “the mother of all political scandals.” He’s right, given our predilection to add “-gate” when we describe any serious scandal. That rhetorical flourish is of a piece with “mother of…” — a superlative lifted from our late and unlamented adversary, Saddam Hussein.

Russert’s Watergate remark reminded me of the night at The Daily Texan, my undergraduate student newspaper, when I led an editorial “We take no pleasure in the resignation of President Nixon…”

My conservative critics attacked that as rank hypocrisy, given my role in longstanding and public criticism of Nixon on grounds related and unrelated to Watergate.

What they did not understand is that no serious person could find joy in a situation where the President of the United States could announce “I am not a crook!” and a majority of the country would be thinking “Oh yes, he is!”

The Citizens United case, where limitations on corporate spending in elections were held to violate the free speech rights of corporate persons, has now put us in a situation where Watergate is such small potatoes that it’s almost quaint.

In Watergate, Nixon had to beat the bushes to come up with a million bucks in his slush fund for the burglars, since it contained a mere $700,000. We say “slush fund” because it came from wealthy donors who were buying the kind of access donations always buy in politics without identifying themselves.

In the post-Citizens United world, a million dollars won’t get it. We have billions pouring into our politics with no fingerprints on the billions.

George Soros, the boogeyman of big political money from the right’s point of view, is so down on President Obama that he actually threatened to fund a primary challenge from the left. This nicely demonstrates the great irony of this election: much of the left is holding its collective nose very hard to vote for Obama and that’s “vote for” as distinguished from “support.”

I personally had decided to merely “vote for” rather than “support” based on my disgust with Obama’s negotiation style, where he seems to throw the best ideas under the bus at the front end. Then I read Obama’s book and discovered he really did believe that most Republicans want the best for the country. I presume that illusion has been shattered by these years of autopilot veto.

I sat down and made a list of Obama’s first term accomplishments against overwhelming odds. I watched the GOP scream “socialism!” over mainstream Keynesian economics, the normal method of handling fiscal policy since FDR gave us a clinic in the role of aggregate demand in a capitalist economy.

I listened to the GOP critique of the very idea of government responsibility for everyone’s access to health care. I remembered that this party that never met a war it didn’t like tried mightily to prevent Sen. Jim Webb’s update of the greatest engine of social mobility in American history, the GI Bill.

That finally brought me to the fact of the matter. As much as I find this flabbergasting, as much as it turns my knees to jelly and my brain to mush… we are refighting the election between FDR and Herbert Hoover! We are in a time warp.

Keynes is no longer conventional wisdom.

The National Labor Relations Act, Social Security, the Environmental Protection Agency, the Civil Rights Act of 1964, the Voting Rights Act of 1965, Griswold v. Connecticut (access to birth control)… everything we worked for but, more importantly, everything our parents worked for, is now once again controversial.

Dwight Eisenhower, the hero of WWII, chose to run as a Republican and led the nation to essentially ratify the New Deal. The worst pullback of the Eisenhower years, Landrum-Griffin, was a tinkering at the margins that did not challenge the fundamental right to independent unions.

Keynesian economics was taken for granted because it had worked, and you could follow the aggregate demand curve when FDR briefly succumbed to attacks on temporary deficits and the recovery started to falter, only to be revived by the unbridled demand of WWII.

I remember when the John Birch Society got written out of the Republican establishment for calling Eisenhower a Communist.

Now Obama does things Eisenhower would have approved and gets attacked as un-American.

An incumbent President is about to be substantially outspent by a challenger with invisible money. Contrary to the criticism mouthed by Justice Samuel Alito during the State of the Union, the money could damn well come from foreign corporations because Citizens United has given us a world where we don’t know where the money comes from.

I’m not so concerned about money from overseas. In our times, national borders have become technicalities unrecognized by corporate power.

Watergate may have been the mother of all political scandals, but what is happening in our time puts Watergate in the shade. And the most scandalous thing is that it’s all perfectly legal.

[Steve Russell lives in Sun City, Texas, near Austin. He is a Texas trial court judge by assignment and associate professor emeritus of criminal justice at Indiana University-Bloomington. Steve was an activist in Austin in the sixties and seventies, and wrote for Austin’s underground paper, The Rag. Steve, who belongs to the Cherokee Nation of Oklahoma, is also a columnist for Indian Country Today, where this article first appeared. He can be reached at swrussel@indiana.edu. Read more articles by Steve Russell on The Rag Blog.]