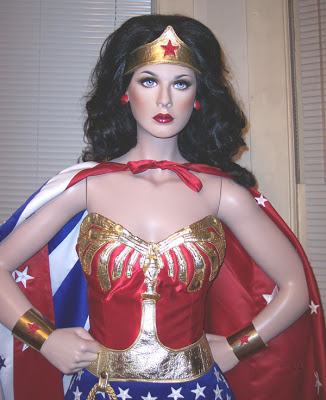 There’s a little “Wonder Woman” in all women. Image from the Wonder Woman Museum.
Let us now praise women
And the roles they play in our lives

I just came from a reunion of the civil rights law firm in Austin, where I used to work. Most of our work involved the anti-war movement and the mainstream discrimination cases, although we did send two lawyers to help defend the avalanche of criminal cases that fell on the American Indian Movement after Wounded Knee II. One of my detractors once said, “the biggest risk you took at the Knee would be a paper cut.”

It’s true that I took no risks at the Knee and I would go farther and say I would not have. Demonstration is easy; organizing is hard, and waving guns at the guys who have all the guns is just plain dumb. That said, once the government dropped the proverbial load of bricks on AIM, AIM had to be defended because their complaints were just even if their tactics were wrong. But I digress.

The people I knew in the civil rights movement were the finest people I’ve known in my life, and at my age I’ve watched plenty of friends and family make the journey, so I know that I should not waste an opportunity to tell somebody how much they have meant to me.

As far as I knew, the firm reunion was put together by a couple of the name partners. At the reunion, I discovered something that should not have been a surprise. Much of the heavy lifting was done by one of several women who had been legal workers.

I got to thinking about her when the truth came out, and I’ve decided that it’s fitting to say some things about her without speaking her name. Here’s a woman who has all the skills to run a law office, with or without computers. She sings and plays piano and accordion. She has a working knowledge of constitutional law, and has forgotten more about medicine than I ever knew. That may be why her daughter has become a medical doctor.

Maybe she is Superwoman, but she represents nicely the women who were behind every campaign I had to run when I was an elected official. I am reminded of the time I didn’t have the money to pay for preparing a mailer and the day before it had to be done my home was suddenly full of women I had no recollection of meeting. It turned out I had met some of them. They appeared because somebody posted a notice on the bulletin board at the battered women’s shelter saying I had an opponent and needed help.

I suppose I got that outpouring from the shelter for two reasons. I had created domestic violence dockets on two different courts, and my opponent had obstructed my efforts on one of those courts. The judge running against me was later arrested for threatening his wife with a gun, but I have no way of knowing if anybody knew about his personal life.

Women were behind everything I’ve ever accomplished in my life. I was married to some of them, some worked for me, and some just helped me for their own reasons, but without them my legal career would not have happened the way it did. It appears to me that we men can’t beat women in academia, in the professions, or in making families the places where our children can feel safe and excel. Seems some men think the only way they can beat women is to beat them.

Men are, indeed, bigger and stronger than women in most cases. There is social science research that tells us women are as likely as men to resort to what is technically domestic violence. That is, they will throw a slap or a dish because they are just as likely as we are to be unskilled at conflict resolution. Violent women notwithstanding, it is the women who arrive in the emergency rooms and the morgues. This is true in the dominant culture and unfortunately it’s also true in our [Indian] cultures.

While it is necessary to put wife beaters in jail, sometimes to keep the peace in the community, jail is not going to stop wife beating. What will stop it is when beating your wife means your fishing buddy doesn’t want to fish with you anymore. When beating your wife is an unadulterated mark of disgrace. When hurting the mother of your children brings you the shame you deserve.

If a judge expresses outrage toward a wife beater, the judge has to be expressing the values of the community, and the community has to be a place where no man, woman, or child will listen to excuses.

She started it. She didn’t have dinner ready on time. She called me a bad name. I’m not here to tell you your wife is perfect, but if you made a bad pick when you got married we have divorce courts for that. I guess you should be proud that everybody would say you are a perfect husband except when you beat her, right?

I can accept that the fact that I have been gifted with a great professional career by a bunch of anonymous women will not apply to everybody. I suppose I can even understand the people who, when I was pushing a female candidate in my tribal election, railed against “petticoat government.”

Habits die hard, although my understanding of Cherokee history matches Wilma Mankiller’s, as expressed in her autobiography: we used to have women leaders before the missionaries taught us that men are meant to run things.

If you can come that far with me, let me offer one more suggestion as a privilege of my age: do not waste an opportunity to tell the women who have made your life better how much they mean to you.

[Steve Russell, Cherokee Nation of Oklahoma, is a Texas trial court judge by assignment and an associate professor of criminal justice at Indiana University. He is a contributor to The Rag Blog and is a columnist for Indian Country Today, where this article also appears. He lives in Bloomington and can be reached at swrussel@indiana.edu.]