Steve Russell :
METRO | Do the right thing, and be proud of your mistakes 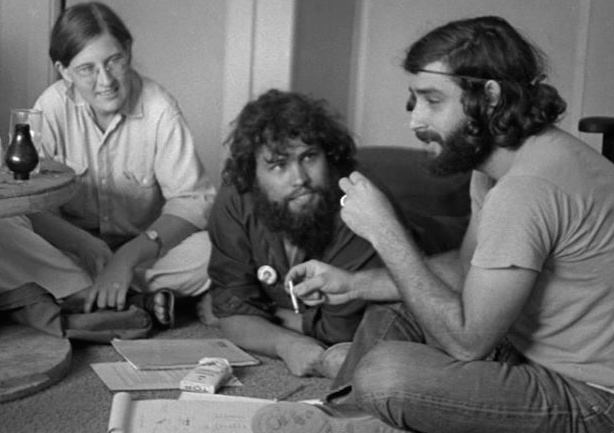 AUSTIN — The Rag started in 1966 in reaction to the election of John Economidy to edit The Daily Texan, the student newspaper of the University of Texas at Austin. He went on to right-wing establishment politics and he certainly foreshadowed that as Texan editor, where I’m sure he created fond memories.

Later in life, Economidy switched sides and became a criminal defense lawyer of some repute. Confronted with documents showing that during his time as editor of The Daily Texan, he was an informant for police agencies seeking to suppress peaceful dissent, he commented: “No doubt about it. As a journalist, it definitely was not appropriate.”

Economidy did his best to sabotage
the counterculture.

Perhaps Economidy’s memories of doing his best to sabotage the counterculture by conducting surveillance of Janis Joplin, Jerry Jeff Walker, and Kinky Friedman, among many others, became less than fond after he grew up. The campus surveillance for which he informed went on to track intimate details of people who are now professors, editors, and serving at every level of government. I am part of that rogue’s gallery, and not the only judge to have that distinction. 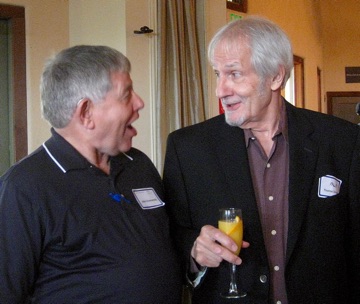 I did not come along until 1969, although I first read The Rag the previous year and I was very aware of the national phenomenon called the Underground Press Syndicate. I had just come from working on Gene McCarthy’s campaign up in Wisconsin and seeing that come to nothing in the Chicago Democratic Convention.

Many McCarthy supporters wound up outside the convention with bumps on their heads courtesy of Mayor Richard Daley and the Chicago Police Department. The Democratic Party establishment did not take kindly to dissent, and we compared Chicago 1968 to Prague 1968 without the tanks. Systemic violence undertaken to squash democracy is what it is and the methods are a quibble.

Yes, I figured RFK was going to win. Yes, I anticipated I would support RFK. But I did not jump on his bandwagon at a time when we in the McCarthy camp were referring to him as “Bobby come lately.”

I knew he did not come to his anti-war position lately, but he came by the courage to run after our guy softened up LBJ.

My feeling about The Texan was that it was free and worth about what I paid for it.

I didn’t know much about campus or Austin or even recent statewide politics, so my feeling about The Texan was that it was free and worth about what I paid for it. (In fact, it was funded from student fees, so I did pay for it.) The writing did not meet my student older than average standards and the content was anodyne.

I was a serious student, but having survived a military hitch that left me keenly aware of my own mortality, I was for lots of sex, drugs, and rock ‘n roll. Actually, I was more into folk music at the time, but you take my meaning. The Rag existed in my culture; The Texan did not.

There came a stunning run of Texan editors who showed the possibilities that had always existed but atrophied from lack of exercise: Lori Rodriguez, Buck Harvey, Michael Eakin.

When The Texan joined the real world I joined The Texan, pissing off journalism students by scoring one of the paying gigs they took to be theirs by choice of major. 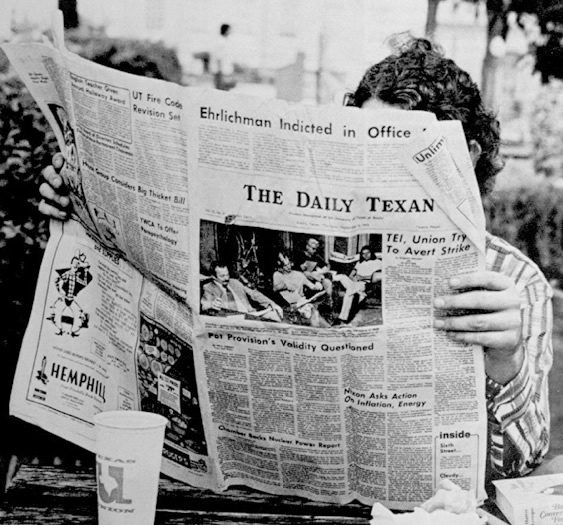 Student catches up on the news, 1974. Image from
Friends of The Daily Texan.

Later, The Texan regressed by my standards. I had gone to law school and scored a Law Students Civil Rights Research Council internship working for the United Farm Workers in the Rio Grande Valley.

By that time, most of my close friends knew I was Indian and wondered why I did not throw elbows to be placed with Dinebeiina Nahiilna be Agaditahe on the Navajo Rez. I think now that if I had taken that path, I may have gotten to be friends with Peter D’Errico a lot sooner, but fate takes curves.

Around those curves, Peter and I, after being colleagues from a distance in academia, would both wind up writing opinions for Indian Country Today, now part of Indian Country Today Media Network, as emeriti professors. D’Errico was certainly running with a distinguished crowd, but we were all young and that remained to be decided.

I thought at the time that I was not ‘Indian.’
I was Cherokee.

Anyway, the reason was — and most non-Indians don’t understand this — I thought at the time that I was not “Indian.” I was Cherokee. DNA might as well have stood for Det Norske Arbeiderparti (Norwegian Labor Party).

I came later to identify with all indigenous people pushed together by the U.S. government and to love the Navajo Rez and to have friends there, but going there would not have been a homecoming.

I had started with the UFW when a farm worker in Milwaukee who barely spoke English convinced me not to cross a picket line to shop for groceries and I wound up joining the picket line.

Had I not gone with the UFW internship, I would never have met César Chávez. One of my great regrets from the Civil Rights Movement days is that I not only did not know MLK, I never even attended an event where he spoke. I consider Chávez to be Indian by blood (now that Indian has meaning to me) and a man of the stature of MLK. I will always be grateful to have known him and proud to be associated with him.

Some time after I returned from the Rio Grande Valley, there was an incident where a grower shot some farm workers on a picket line. The local TV station sent a crew to the grower’s home, and before he chased them off, he commented about the farm workers, “I didn’t shoot AT ’em. I SHOT ’em.”

The shooting naturally stirred up the Austin UFW supporters, and we collected a bunch of food for the strikers and took it down there. The strikers called for a march to protest the violence and so I called up The Daily Texan, where I had worked under a previous editor, to offer a lift south to a Texan reporter. 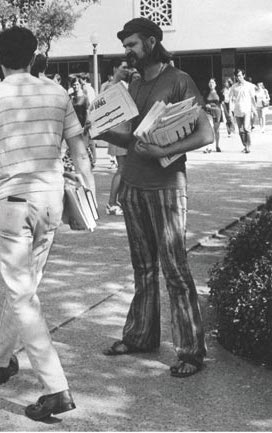 The editor was friendly enough, but he told me his travel budget was stretched and he had to save the money for the forthcoming College World Series, in which he expected the Longhorns to be playing in Nebraska. Would I like to publish an opinion piece when I got back?

I accepted his invitation but I was very disappointed at his priorities.

When I ran for Justice of the Peace, The Texan endorsed my opponent.

The next year, when I ran for Justice of the Peace, The Texan endorsed my opponent. The Rag, put out by a new group of people I barely knew, endorsed me.

Later, when I was a Municipal Court judge, The Texan editorialized that I was doing a good job when I engineered a sit down between the cops and students after some extreme celebration of football wins led to arrests.

So my view of The Texan, like The Texan itself, had ups and downs that came with electing the editor. It remains an excellent student newspaper, as student newspapers go, and always has a boatload of potential waiting to be tapped.

If I were a student, I would care more about the election for Texan editor than for head of Student Government.

The Rag has resurfaced in the 21st century as Rag Radio and a blog where I publish now and then.

I cherish my time at The Texan but don’t ask me to choose it over my time at The Rag. This memory from my youth goes out to young people who are creating their own memories.

Learn a trade inside the establishment or outside it. Just learn to be useful doing something you do well. Try always to do the right thing and the memories will come. You are making those memories right now.

This article was also published by the Indian Country Today Media Network and was cross-posted by the author to The Rag Blog.

1 Response to Steve Russell :
METRO | Do the right thing, and be proud of your mistakes