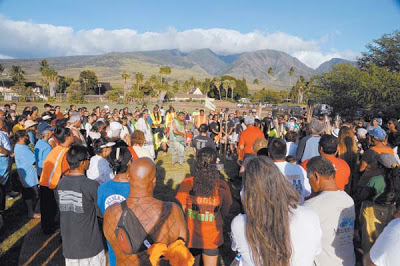 A sea of people of all ages embraced and honi’d, or touched noses, in early March at Lahaina while celebrating the end of a weeklong, 193-mile torch march around Maui to raise attention for Native Hawaiian issues. Photo from Hawaiian Independence Blog.
Got indigenous?

Legal arguments often revolve around competing analogies. The parties claim the case is more like known case A or known case B and whoever wins the war of analogy wins the lawsuit. If the Cherokee freedmen case is about the right of a tribe to determine citizenship, the racists win. If it is about the sanctity of treaties, the freedmen win. Framing the issue floats outside of “right and wrong” because it’s the law that tribes determine their own citizenship standards and that treaties should be honored.

If you are a Native Hawaiian, is your status more like American Indians or more like an ethnic minority? Addressing this question inevitably requires drawing conclusions about the legal status of American Indians, and this has not escaped the notice of people who oppose Hawaiian sovereignty. Indeed, they are often the same people who opposed Indian sovereignty on the ground that it is a racial special privilege that disadvantages white people.

An Associated Press report on the Native Hawaiian bill quotes Gail Heriot, a member of the U.S. Commission on Civil Rights, as saying that granting sovereign status to Native Hawaiians would be like doing the same for Cajuns in Louisiana or Chicanos in the Southwest. This appears to be the Republican Party line. Sound familiar?

Nothing I am about to say should be construed as opposing civil rights for any ethnic group. I have nothing but respect for the mainstream civil rights movement by and for African-Americans, and the same for the civil rights of the people I am about to discuss. All I’m saying is that American Indians and Native Hawaiians (and Native Alaskans) are indigenous peoples, and that makes all the difference.

Cajuns, or Acadians, were predominantly French colonists who were in a fight with British colonists called, in this country, the French and Indian War and in Europe, the Seven Years War. They emigrated from Canada to Louisiana thinking that they were staying on French soil when, in fact, France had secretly ceded Louisiana to Spain.

All of this is quite tragic if you don’t take into account that at the time, Louisiana was and had been from time immemorial occupied by American Indians to whom the French and Spanish and British and — in 1803, Americans — were just different sets of colonizers, trespassers on Indian land.

Yes, the Cajuns did intermarry with Indians, but so did all the colonists. The Cajun culture is what it is, which is delightful, but it is not indigenous. Yes, the Cajuns were and sometimes are abused, but not because they originally owned Louisiana.

Chicanos in the Southwest are a little harder because their blood is primarily indigenous. How do we know this? Because the Spanish kept very good records and Mexican society was quite racist. A higher degree of indigenous blood meant lower social status. Having Spanish ancestors was very important, and the Spanish ruthlessly suppressed tribalism.

Chicanos have in the past and do to this day in some places suffer from outrageous discrimination. There were the “No Dogs or Mexicans” signs on restaurants in the ’50s. There was the attempt to “desegregate” the public schools in Corpus Christi by mixing brown kids and black kids so as not to contaminate the white kids.

The policy prescriptions these bozos push are aimed at Hispanics but they almost always cause collateral damage among American Indians. They want to give local police authority to make brown people prove their citizenship, and that means Indians get rousted. They want to make the public use of any language but English illegal. They target Spanish but they hit tribal languages. When they attack bilingual education, they force tribal language preservation programs away from public funding. And if a public worker can’t be paid to interpret Spanish, she can’t be paid to interpret Navajo.

Sociologists call this politics “nativist,” which provides Indians a bit of comic relief, since all the people pushing it are descendants of colonists. The “nativists” want persons of Mexican descent to “go back where they came from.” Apparently, the nativist history books don’t teach about the Mexican War, because lots of those Mexican-Americans were in Mexico when the border moved and put them in the United States.

At the end of that war, the Treaty of Guadalupe Hidalgo said:

“Mexicans now established in territories previously belonging to Mexico, and which remain for the future within the limits of the United States, as defined by the present treaty, shall be free to continue where they now reside, or to remove at any time to the Mexican Republic, retaining the property which they possess in the said territories…

“Those who shall prefer to remain in the said territories may either retain the title and rights of Mexican citizens, or acquire those of citizens of the United States.”

If this treaty means anything, Mexican-Americans living in the Southwest have the full civil rights of American citizens. Like in the case of the Cajuns, these people are abused because they are caught in a struggle between two colonial governments, in this case the U.S. and Mexico. Abusing them is wrong, but abuse does not make them indigenous and neither does intermarriage unless it is coupled with maintaining tribal relations.

Most Native Hawaiians are living where they have lived from time immemorial. Like us, they struggle to preserve their language and customs but their language and customs are not “foreign” — they run with the land. Like us, they have been dispossessed by the colonists. They had an indigenous government that was overthrown by the U.S. government. Native Hawaiians have in common with us that the trespassers seek to treat them as trespassers. That practically defines indigenous, and that is the basis for claims that, like Indian claims, go far beyond equal treatment as citizens.

[Steve Russell, Cherokee Nation of Oklahoma, is a Texas trial court judge by assignment and an associate professor of criminal justice at Indiana University. He is a columnist for Indian Country Today, where this article also appeared. Steve wrote for Austin’s The Rag in the Sixties and seventies and is a regular contributor to The Rag Blog. He lives in Bloomington and can be reached at swrussel@indiana.edu.]

5 Responses to Steve Russell on Native Hawaiians: Got Indigenous?