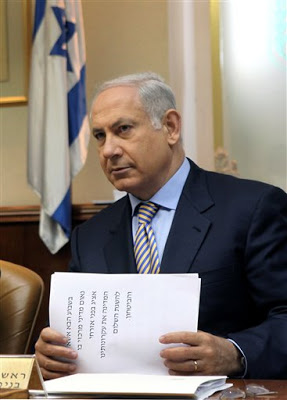 Put on the spot by Obama: Israeli Prime Benjamin Netanyahu, at weekly cabinet meeting in Jerusalem Sunday, June 7, 2009. Photo by Jim Hollander / AP.
A rant in recognition of June 6

Yes, it will be difficult. No, he may not pull it off. But I’ve never felt so hopeful or so proud of my government.

Obama’s Cairo speech took my breath away in both form and substance.

It’s a measure of his having struck the right chords that he is being pounded now by the Israeli right and the Arab “left,” if you can call most of that stuff left. I personally hesitate to define “left” by tolerance for non-combatant body count.

On the home front, the crazed right is going even crazier at the words “Holy Qur’an,” let alone quoting from it.

That speech basically took away the platform on which Benjamin Netanyahu ran. Bibi must betray his followers, or rebuild his coalition, or get in a public pissing match with the U.S. The Israel lobby is tuning up to defend the ramparts once again, but they have not managed the full cry they would like to see because American Jews are slow to turn against Hillary Clinton and Rahm Emmanuel.

And he then sent George Mitchell, the guy who negotiated the last impossible peace deal, to kick start Netanyahu’s grundy ass.

And it’s no accident that Obama’s next public appearance was at Buchenwald. Or that he made sure it was Rahm photographed riding the camel and not him.

Goddam, I never thought I would live to see the day when an American President would tell the Arabs flat out that the Holocaust deniers and 9-11 deniers among them are idiots and the Israelis have a right to their own state… and then turn right around and essentially commit to regime change in Israel if necessary to support “Palestine,” a word never before uttered by an American President!

Yes, it will be difficult. No, he may not pull it off. But I’ve never felt so hopeful or so proud of my government. Carter came close, but not this close.

I sent the above rant to a friend of mine, also a boomer, and she replied “I’m not in love with Obama. He’s just the best president of my lifetime.”

After I picked myself up off the floor and my gut quit hurting, it dawned on me that Obama’s good notices by most of my generation are aided by the fact that he follows Bush II — the president who makes Richard Nixon look like fucking FDR!

Anyway, this June 6 message is only secondarily about Obama, although without Obama there would be more nostalgia and less current events. The larger context is whether the U.S. ever does anything right, whether the left is capable of relating to American citizenship in any manner but shame.

So it seems to me appropriate to append the June 6 message below, conveying the shameless message that this country may be slow, but we get it right more often than any other country that has faced similar challenges. How hard could it be to govern Sweden?

Next time I use my passport, I can do so without slinking around in the shame brought upon us by the last President. Obama has in so many words disclaimed any interest in permanent military bases in Iraq. Yes, I’m aware that the neocons have published an intent to keep our boots on the ground as long as the oil lasts, but notice has been served that they are not making policy any more.

One more story if I may.

A Canadian Indian told me that his dad enlisted just in time to get caught up in the Normandy hairball, and right after he married my friend’s mom. He barely had time to get her pregnant when he explained that he had been drafted and had to go fight Hitler.

She did not learn until after WWII that Canada did not practice conscription at that time.

My friend’s dad had enough ass in his britches to go fight Hitler because Hitler needed fighting, but not enough to tell his new bride.

If you know any of the oldsters who did that, today would be a good day to thank them.

Sent Just Prior to the Invasion:

Soldiers, Sailors and Airmen of the Allied Expeditionary Force! You are about to embark upon a great crusade, toward which we have striven these many months. The eyes of the world are upon you. The hopes and prayers of liberty loving people everywhere march with you. In company with our brave Allies and brothers in arms on other fronts, you will bring about the destruction of the German war machine, the elimination of Nazi tyranny over the oppressed peoples of Europe, and security for ourselves in a free world.

Your task will not be an easy one. Your enemy is well trained, well equipped and battle hardened. He will fight savagely.

But this is the year 1944! Much has happened since the Nazi triumphs of 1940-41. The United Nations have inflicted upon the Germans great defeats, in open battle, man to man. Our air offensive has seriously reduced their strength in the air and their capacity to wage war on the ground. Our home fronts have given us an overwhelming superiority in weapons and munitions of war, and placed at our disposal great reserves of trained fighting men. The tide has turned! The free men of the world are marching together to victory!

I have full confidence in your courage, devotion to duty and skill in battle. We will accept nothing less than full victory!

Good Luck! And let us all beseech the blessings of Almighty God upon this great and noble undertaking.

9 Responses to Steve Russell : Ranting on Obama and Ike