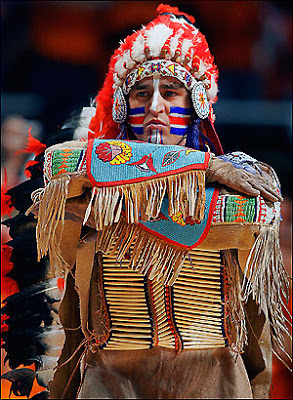 Chief Illiniwok, the long-embattled mascot of the University of Illinois at Urbana-Champaign, was retired in 2007. Illiniwok was opposed by American Indian groups and others for perpetuating cultural stereotypes. Native American caricatures live on as mascots in Cleveland and Washington, D.C. Image from The Society Pages.
The unlikely story of Dr. Wahoo,
Professor Illiniwek, and RGIII

Lots of things have followed me into my second retirement. Some, like continuing work with Indian graduate students, are a source of delight. Others less so. I am reminded that I failed to change the world.

The National Science Foundation just sent me the 2011 report on earned PhDs. I immediately headed for the graph that breaks down the numbers by race/ethnicity.

Like all credentials, the PhD can represent more aspiration than reality, but the aspiration is worthy by any measure. The objective of a doctoral dissertation is to add to the total store of human knowledge in a measurable way.

It’s true that some PhD granting schools are more rigorous than others, the same as undergraduate schools.

My claim is not that the credential is infallible evidence of the accomplishment it is supposed to represent. We all know better than that. But it’s also more than just the union card for the professoring trade, and the more tribal citizens with advanced degrees — PhD, MD, JD, or others — the more 21st century possibilities are open to the tribe, not just the individuals who get the degrees. So, yes, if my academic career has involved advancing Indians on the micro level, one student at a time, I remain highly interested in the macro level.

I remember a discussion about the minimum number of Indian lawyers it would take to form a section of the American Bar Association and realizing it would require us to literally sign up every known Indian with a law degree (at the time) to what is a voluntary and quite expensive organization (to which I currently do not belong). I remember talking with a non-Indian MD who was working off his school debts with the Indian Health Service and coming to the realization that he did not think much of Indians. I don’t like the view at the bottom of the barrel.

In the 2011 numbers, I noted that Hispanics, at 2,006 new PhDs, surpassed African-Americans, at 1,953. This has been a continuing trend because Hispanics (16.7% of the population) outnumber blacks (13.1%). American Indians, even by the expansive new definition that doubled the numbers, and even adding Native Hawaiians, are only 1.4% of the population. Number of new PhDs? 136.

African-Americans are about 13.1% of the population and produced about 6.14% of the new PhDs.

Indigenous persons are, on paper, 1.4% of the population, a number that is greatly overstated by self-reporting from the Elizabeth Warrens of the world. We produced .43% of the new PhDs.

I watched similar numbers for years involving the JD degree. We are growing in absolute numbers, and we’ll continue to get better because education is as hereditary as lack of education. I am a first generation college student and all four of my kids went to college. So, are we satisfied?

I’m not satisfied, and every time I hear a bright Indian kid accused of “thinking white” for the sin of thinking, I want to revert to savage stereotype.

When Indians do something positive, we are quick to offer cultural explanations for our superiority. It’s about time culture took some of the rap for our academic underperformance.

You want more evidence? Asians are about 5% of the population and snagged over 9% of the new PhDs. I’ve never heard of an Asian kid being accused of “thinking white” or of trying to elevate herself above her peers.

Speaking of savage stereotypes, some people would say that the problem of our lack of success in education is a problem way bigger than, say, Indian mascots.

With that painful sight of Robert Griffin III going down on his knee the wrong way, I was reminded that I care about him as an exciting rookie player from my neck of the woods while I root for the Washington team to lose, always.

RGIII played his high school ball at Copperas Cove and his college ball at Baylor. He’s one of those new wave running quarterbacks. You never know if he is going to hand it to the running back, throw it, or take off. More to the point, neither does the defense.

So why, oh why, did he have to get drafted by the Washington team?

In 2008, a refereed article appeared in the journal Basic and Applied Psychology, “Of Warrior Chiefs and Indian Princesses: The Psychological Consequences of American Indian Mascots.” Like most science, it contains more mathematics than opinions, but I’ll skip the math and go to the money shot in the abstract:

We suggest that American Indian mascots are harmful because they remind American Indians of the limited ways others see them and, in this way, constrain how they can see themselves.

The public Indian comes in two versions, primitive relic or romantic warrior, both doomed. Historical figures, feared in the past, pitied in the present, irrelevant to the future.

When I was a professor at the University of Texas-San Antonio, they still had an affirmative action plan. It did not call for the recruitment of Indians, citing the lack of Indian PhDs in the talent pool. There was a hiring goal for Asian males, but none for Indians of any gender.

There were two Indians on the faculty. The other guy did not get tenured. I did, but I took an offer at a Research I school… where I was one of two Indians. Again, I was the only one of the two of us to get tenured, but they hired three more and we discovered another who had never before made himself known. Two of the three hires left by the time I did.

I was born in a small town in Oklahoma where the most numerous minority was Indians. Only one in my age cohort finished high school. I myself made it only to the ninth grade. We expected no more of ourselves than the public schools expected of us, and we had no educated role models.

That has not changed, and we’ve had about all the “honoring” by turning us into mascots that we can stand.

I wish RGIII all the best for a quick recovery, and for the day he plays for a team that does not disadvantage Indian children.