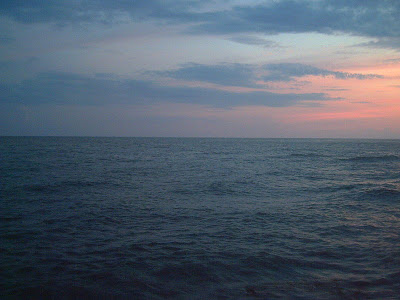 “We pray in English so we understand each other; we pray in Indian so God understands us.” — Lakota elder

“Coffee more… you want?” A young man, brown but of indeterminate nationality, is walking by with a carafe. My mind replies “Si, por favor,” but I quickly realize I have not identified his accent and his features do not look American Indian (as most Latin Americans do), so I mentally retreat to “Yes, please.”

I have yet to find an American working on this ship or, as a friend of mine maintains, a “USian.” Her position that Canada and all of Latin America are “American” is geographically unassailable but linguistically confusing. Whatever you call them, every individual I’ve seen so far is not, in the immortal words of the New Jersey bard, “born in the USA.”

The skipper is a Dane. The other folks important enough to have mugshots in the ship’s guide are from the UK, Canada, Austria, Croatia, and Ireland. Our waiter is Mexican and the barmaid is from Grenada. One of the dining options every day is Indian food… from India, that is.

I take my coffee out on the deck and sit down to drink it. There’s nothing but ocean as far as my eyes see, but I’m proud of myself for beginning to think in Spanish since I know the nearest land is the Yucatan. Of course, being happy at thinking in Spanish makes me ashamed of having surrendered the battle to think in Cherokee.

The only time I even come close to thinking in Cherokee is in ceremony, when English feels like a square peg for a round hole. I am reminded of a multi-tribal meeting where a Lakota elder who followed a Shoshone who had followed a Cherokee said, “We pray in English so we understand each other; we pray in Indian so God understands us.”

I’ll never forget that witticism, and “Indian” as a language makes pretty much the same sense as “Indian” as a race. The memory brings back my mellow mood.

Being at sea is oddly relaxing. Oddly, because of the obvious peril. If the boat breaks, are we going to swim home? My bemusement at non-swimmers who take cruises departs with that thought.

Speaking of peril, I was once inside a scale model of Columbus’ flagship, the Santa Maria. I remember thinking of the distance those genocidal goldseekers traveled in that little thing… with horses, yet! Leaving guns, germs and steel aside, our ancestors were not conquered by men without courage. Those Spaniards had to be tough SOBs to even make it here. SOBs, thieves, murderers — of course, but also tough.

Surrounded by ocean to all horizons, it’s easy to visualize how men think they can dump waste into it forever but still take fish out of it forever. It’s an understandable mistake. I find it harder to forgive what I saw in the reconstructed ruin of Ft. Laramie, Wyoming: a multi-hole outhouse jutting over the river. Upstream, cold and clear trout water. Downstream, a sewer. How could the colonists have thought that was right?

Of course, I’m biased. Our elders admonish us as boys not to urinate in the river. I can’t say we all obeyed, but I can in my own elder years drink in the metaphor, pun intended, as harsh reality. In fact, we humans have overfished the oceans and we have trashed them to a degree hard for those of us born landlocked to contemplate. Perhaps our mistakes are more significant than we are.

The Pope wanted to lock Galileo up for these kinds of thoughts, a pope like the one who sent those Spaniards to steal and kill and rape. Yet we indigenous peoples, who are thought to be the most primitive people on earth because we were last into the Iron Age, take that insight with our mother’s milk! We understand we are not the center of everything that matters.

How can I presume that the ocean will tolerate humankind’s mistakes and so we will always have fish to eat? Or that the whole planet will learn English for my convenience? Next time, I shall answer the man in Spanish.

[Steve Russell, Cherokee Nation of Oklahoma, lives in Sun City, Texas, near Austin. He is a Texas trial court judge by assignment and associate professor emeritus of criminal justice at Indiana University-Bloomington. Steve was an activist in Austin in the sixties and seventies, and wrote for Austin’s underground paper, The Rag. Steve, who belongs to the Cherokee Nation of Oklahoma, is also a columnist for Indian Country Today. He can be reached at swrussel@indiana.edu. Read more articles by Steve Russell on The Rag Blog.]