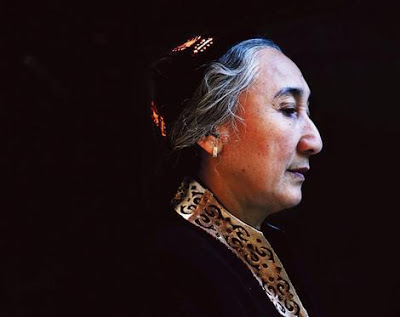 Rebiya Kadeer, the fascinating woman at the center of the cock-up, would never be taken for a modern-day Mata Hari.

As the People’s Republic of China brutally puts down unrest among the Uyghurs, a Turkic people in the Central Asian province of Xinjiang, the Obama administration is facing a diplomatic balls-up.

Like the neighboring Tibetan Buddhists, the Uighur Muslims have fought for centuries against their mistreatment by the Han Chinese, whose massive immigration into Xinjiang now threatens to swamp Uyghur culture and identity in its ancient homeland on the Silk Route. But, as much as one may sympathize with the Uyghurs, as I do, it hardly helps that their expatriate leaders turn out to be all too publicly on Washington’s payroll.

Just how will Secretary of State Hillary Clinton explain that to Beijing? Even more important: Did Mrs. Clinton even know that we were funding the Uyghur rebels? Did President Obama and his national security advisors? Or did they all leave key aspects of our foreign relations with China to Radio Free Asia, which the CIA created at the start of the Cold War, and the National Endowment for Democracy, which President Reagan created to handle CIA activities whose cover had been blown?

Rebiya Kadeer, the fascinating woman at the center of the cock-up, would never be taken for a modern-day Mata Hari. A grandmother in her sixties with a long graying braid down to her waist, she is a former laundress whose investments in real estate and department stores made her, in her own words, China’s richest woman. She now lives in exile in a northern Virginia suburb, thousands of miles away from Xinjiang, or East Turkestan, the historic name that Kadeer prefers to use.

The Chinese accuse Kadeer and her World Uighur Congress of using telephones and the Internet to “mastermind” the biggest threat to Beijing since the 1989 protests in Tiananmen Square. Taking a leaf out of George W. Bush’s “War on Terror,” the Chinese also claim that Kadeer works with the East Turkestan Islamic Movement, which the U.S. State Department has listed as a terrorist group.

Kadeer rejects both charges, but her skirts are hardly snow white. Like a government-in-exile, her World Uyghur Congress claims that it “represents the collective interests of the Uyghur people both in East Turkestan and abroad.” The group actively promotes the right of her people “to use peaceful, nonviolent, and democratic means to determine the political future of East Turkestan.”

Such a future would likely lead to complete independence, which the Chinese see as separatist and seditious. Kadeer herself denies being “a separatist,” but said just this month that China’s actions over six decades have forced every Uighur to want independence.

The problem for Washington is that our official National Endowment for Democracy (NED) funds Kadeer’s activism. In 2008 alone, NED gave $146,000 to the World Uyghur Congress, $269,000 to the Uyghur American Association, which Kadeer also leads, and $134,805 to the International Uyghur Human Rights and Democracy Foundation, which Kadeer found in 2005 after serving nearly six years as a political prisoner in China.

NED makes no secret of its support for Kadeer, whom it celebrates as “the Mother of All Uyghurs.” Just last month, NED cosponsored a conference on East Turkestan, at which the group’s long-time president Carl Gershman gave a speech praising Kadeer and her work. A left-behind neocon, Gershman regularly uses his official position, however shadowy, to encourage on-going embarrassments for Beijing.

Washington’s Radio Free Asia (RFA) similarly engages in ad hoc foreign policy-making. On the Internet and in broadcasts in Uyghur and other languages, RFA features Kadeer and gives its audience detailed instructions on how to get around Beijing’s Internet blockage and radio jamming. Significantly, Beijing turned against Kadeer after her husband Sidik Rouzi left China and went to work for RFA.

Gershman’s NED and the RFA reach back to the Cold War, and their ideological zeal has remained part of the not-so-secret policy of previous administrations. Secretary of State Condoleezza Rice lobbied the Chinese to free Kadeer from prison in 1995, and President Bush met with her privately and publicly praised her at a conference “on democracy and security” in Prague in June 2007.

The all-too-obvious goal was to brand Kadeer as the Uyghur Dalai Lama. This should bring to mind the game nations play, as when President Bush first met with the Buddhist leader in Washington and then turned his back on Tibet at the opening ceremony of last year’s Olympics in Beijing.

Whatever individual Americans think of Rebiya Kadeer and her remarkable life story, what sense does it make to continue tying Washington to a breakaway movement in China? What will Obama and Clinton do if Kadeer’s efforts truly gain traction within China? And, pardon the obvious, how would our leaders respond if Beijing started putting its money and propaganda broadcasts behind Puerto Ricans, Texans, Alaskans, or Native Americans who wanted independence from the United States?

All this arises just a month after the Obama administration refused to allow 17 Uyghur detainees from Guantanamo from settling in the United States. American officials had long ago cleared them of being terrorists, but Obama sent them packing to Bermuda and Palau.

If, as he often says, the president wants America to lead by example, he should reverse his earlier policy and invite the Uyghur detainees to live in the U.S.A. Nothing would do more to promote our commitment to human rights and to removing the knee-jerk terrorist stigma from Muslims of all nations.

[A veteran of the Berkeley Free Speech Movement and the New Left monthly Ramparts, Steve Weissman lived for many years in London, working as a magazine writer and television producer. He now lives and works in France. For previous articles by Steve Weissman on The Rag Blog, go here.]