Steve Weissman : Netanyahu Offers a State and a Half 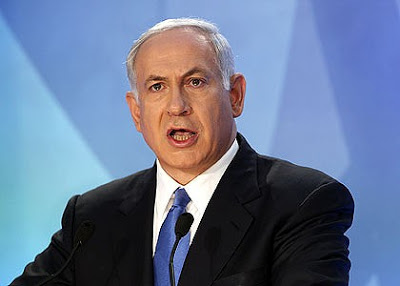 Binyamin Netanyahu speaks on Palestine. Could he become the Nixon of the Middle East? Photo by AP.
Israel Offers a State and a Half

To bring the Palestinians and their Arab supporters back to the table, [Obama] will have to find something new, and he will not find it in Netanyahu’s speech.

Could Israeli Prime Minister Binyamin Netanyahu become the Richard Nixon of the Middle East, as Barack Obama invited him to do? Could he break with his hard-line past and reach out to the Palestinians the way Nixon did with the Chinese? Or will he pay lip service to peace even as he does everything he can to keep the Palestinians from ever getting a viable state of their own? Watching it on TV Sunday night, I came away deeply depressed by the spirit and substance of Netanyahu’s speech, though the Obama White House diplomatically welcomed his acceptance of a Palestinian state, however limited, as an “important step forward.”

Netanyahu was uncharacteristically clear and straightforward about what his coalition government would and would not accept. “The territory in Palestinian hands must be demilitarized in other words, without an army, without control of airspace, and with effective security safeguards…” he insisted.

“A fundamental condition for ending the conflict is a public, binding and honest Palestinian recognition of the state of Israel as the nation state of the Jewish people.”

Netanyahu set these as the primary preconditions for his acceptance of even a limited Palestinian state.

“If we receive this undertaking, for demilitarization and the security arrangements required by Israel, and if the Palestinians recognize Israel as the nation state of the Jewish people,” he declared, “we will be prepared for a true peace agreement, to reach a solution of a demilitarized Palestinian state alongside the Jewish state.”

On other contentious issues, Netanyahu would refrain from seizing any more land claimed by the Palestinians, but would continue to allow the 300,000 Israelis living in the West Bank to expand existing settlements within their current borders. He would refuse to allow Palestinian refugees to return to their homes within Israeli borders. He would never negotiate with Hamas. And he would deny the Palestinians the right to have their capital in East Jerusalem.

As Netanyahu and his advisers might have intended, the Palestinian Authority and Hamas immediately rejected his preconditions. They did not find his belated acceptance of a Palestinian state as the great bargaining chip he wanted it to be, since earlier Israeli governments of Ehud Barak, Ariel Sharon and Ehud Olmert had already accepted the principle. Even more, the Palestinians recoiled at his arrogance in attempting to impose strategic and ideological preconditions before the talks had even resumed.

“Netanyahu’s remarks have sabotaged all initiatives, paralyzed all efforts being made and challenges the Palestinian, Arab and American positions,” said Nabil Abu Rudeinah, an aide to Palestinian President Mahmoud Abbas.

“His speech is a slap in the face of all those who have opted for the choice of negotiations with Israel,” said senior Hamas leader Ismail Radwan. “What needs to be done immediately is to sever all ties with Israel.”

Underlying the Palestinian response was a rejection of the way Netanyahu tried to lay down the law. Negotiators could have worked through many of the “details” in subsequent negotiations. But no self-respecting Palestinian leader could accept them in advance as a fiat from the Israelis.

Take the right of Palestinian refugees to return to homes they abandoned during the 1948 Israeli-Arab war. Over the years, various Palestinians have suggested a compromise that would include an affirmation of the right of return along with compensation for the vast majority of the refugees who have no desire to live in Israel.

A serious compromise might also include compensation for Jewish refugees who fled Arab lands in which they had lived for centuries. But no Palestinian leader could reject the right of return, which is enshrined as a principle in international law.

Netanyahu’s demands for ironclad guarantees of Israel’s security could find similar solutions. But the Israelis would have to accept reciprocal limitations on their own sovereignty, including a good measure of international intervention. Again, these should be details for good-faith negotiations, not a dictate that the Palestinians accept half a state in advance.

Jerusalem presents a different case. As most observers acknowledge, the Israelis will probably end up having to accept a Palestinian capital in East Jerusalem, which is home to the Dome of the Rock, the third holiest site in the Islamic faith. “A united Jerusalem as the eternal, undivided capital of the Jewish people in the state of Israel forever” plays well to Zionists, but the Obama administration will not likely let the demand stand in its way.

Much the same is true of the Palestinians having to recognize that “The State of Israel is the national homeland of the Jewish People and will remain so.” This is the central tenet of Zionism, and Netanyahu is essentially demanding that the Palestinians affirm Zionism, which would mean rejecting their own belief that the land is historically their own.

So, where does that leave “the peace process”? Back in Obama’s lap. To bring the Palestinians and their Arab supporters back to the table, he will have to find something new, and he will not find it in Netanyahu’s speech.

This entry was posted in RagBlog and tagged Israel, Middle East, Netanyahu, Palestine. Bookmark the permalink.