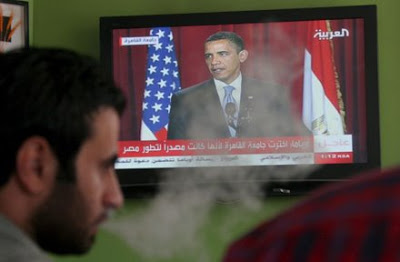 A bigger problem for Obama’s relations with the world’s Muslims will be his military escalation in Afghanistan and his ever-deepening involvement in Pakistan.

From his first “greeting of peace from Muslim communities in my country: assalaamu alaykum,” President Barack Hussein Obama showed how to use the bully pulpit. Some listeners might have found him pedantic or even preachy, but he was delivering his sermon to American and Israeli audiences as much as to the world’s Muslims. “As the Holy Koran tells us,” he set the tone, “be conscious of God and speak always the truth.”

Nowhere was his truth more nuanced, more powerful and less applauded by his Egyptian audience than in his declaration of America’s unbreakable bond with Israel, tying it directly to the Holocaust.

“Tomorrow, I will visit Buchenwald, which was part of a network of camps where Jews were enslaved, tortured, shot and gassed to death by the Third Reich,” he said. “Six million Jews were killed — more than the entire Jewish population of Israel today. Denying that fact is baseless, ignorant and hateful. Threatening Israel with destruction — or repeating vile stereotypes about Jews — is deeply wrong, and only serves to evoke in the minds of Israelis this most painful of memories while preventing the peace that the people of this region deserve.”

These were strong words in a part of the world that continues to spread the anti-Semitic venom of “The Protocols of the Elders of Zion” and regularly denies that the Holocaust happened, as Iranian President Ahmadinejad had done only the night before. Yet Obama found it equally “undeniable that the Palestinian people — Muslims and Christians — have suffered in pursuit of a homeland.

“For more than sixty years they have endured the pain of dislocation,” he declared. “Many wait in refugee camps in the West Bank, Gaza and neighboring lands for a life of peace and security that they have never been able to lead. They endure the daily humiliations — large and small — that come with occupation.”

The Palestinian plight is “intolerable,” said Obama. “America will not turn our backs on the legitimate Palestinian aspiration for dignity, opportunity and a state of their own.”

How do we get from here to there? By the Arab states taking new steps beyond the Arab Peace Initiative, he urged. And by Palestinians and Israelis meeting the obligations they have already accepted under the Road Map.

“Palestinians must abandon violence,” said Obama. “Resistance through violence and killing is wrong and does not succeed. For centuries, black people in America suffered the lash of the whip as slaves and the humiliation of segregation. But it was not violence that won full and equal rights. It was a peaceful and determined insistence upon the ideals at the center of America’s founding.”

Israel, he insisted, must acknowledge the Palestinians’ right to their own state, take concrete steps to help resolve the continuing humanitarian crisis in Gaza and the continuing lack of opportunity in the West Bank, and put an end to Jewish settlements on Palestinian land.

“The United States does not accept the legitimacy of continued Israeli settlements,” said Obama. “This construction violates previous agreements and undermines efforts to achieve peace. It is time for these settlements to stop.”

Whether Obama can make his vision stick remains to be seen, though cynics will remain a dime a dozen. But, the success of the speech in Cairo will make it that much harder for Prime Minister Bibi Netanyahu to use his allies in Congress to soften Obama’s demands on Israel. Obama added little new about how he hoped to bring Hamas or the Iranians, who supply Hamas, to accept a two-state solution.

A bigger problem for Obama’s relations with the world’s Muslims will be his military escalation in Afghanistan and his ever-deepening involvement in Pakistan. In his speech, he defended both as a response to al-Qaeda and other violent extremists “who pose a grave threat to our security” and who are “determined to kill as many Americans as possible.”

The question he did not address was whether American intervention would subdue that threat or recruit more Afghans, Pakistanis and other Muslims from around the world against the United States. The evidence so far is that an overwhelmingly military response is doing far more harm than good. Why doesn’t Obama see that? Why doesn’t he heed his own advice to the Palestinians?

“Violence is a dead end,” he told them. “It is a sign of neither courage nor power to shoot rockets at sleeping children, or to blow up old women on a bus. That is not how moral authority is claimed; that is how it is surrendered.”

One need not be a nonviolent activist to hear the wisdom of Barack Hussein Obama’s words, especially as American drones continue to kill innocent Afghans or Pakistanis.