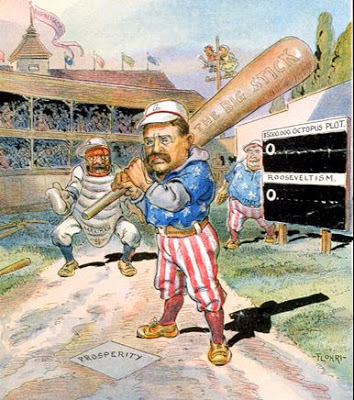 In less than hundred days in office, President Barack Obama has already demonstrated his desire to speak softly to all comers, friend or foe, while his proposed military budget shows a determination to carry America’s big stick into far-off trouble spots that most of us don’t know how to spell.

“Speak softly and carry a big stick,” President Theodore Roosevelt proclaimed just over a hundred years ago. Unabashedly committed to make America an imperial power, the energetic Roosevelt looked to a strong Navy to enforce the Monroe’s Doctrine’s hold over Latin America and to project the country’s growing power into the far corners of the world.

In less than hundred days in office, President Barack Obama has already demonstrated his desire to speak softly to all comers, friend or foe, while his proposed military budget shows a determination to carry America’s big stick into far-off trouble spots that most of us don’t know how to spell. The budget numbers and choice of weapon systems tell the story. Obama turns out be far more globally ambitious than either his supporters or detractors expected, and far more eager for Washington to remain the world’s policeman, ready, willing, and able to intervene militarily in what the Pentagon calls counter-insurgency and Teddy Roosevelt would have called colonial wars.

As Secretary of Defense Robert Gates put it, the Pentagon would retain a hedge against other risks, but the primary goal was to prepare to “fight the wars we are in today and the scenarios we are most likely to face in the years to come.”

Up to now, the raw numbers have drawn the most attention, much of it scurrilous or silly. Republican hawks condemn Obama for “gutting the military budget.” Anti-war bloggers defend him for proposing the most military spending in years, an estimated $534 billion or some 4% higher than George W. Bush’s last budget. And, it takes the right-wing libertarians at the Cato Institute to point out that the total military spending – including the wars in Iraq and Afghanistan and other incidentals – amounts to more than $750 billion. According to CATO researcher Benjamin H. Friedman, “That is more than six times what China spends, 10 times what Russia spends and 70 times what Iran, North Korea and Syria spend combined.”

Obama’s choice of which arms to keep – and which to cut – further highlights his global ambitions. He has forced the Pentagon to cut down on overly exquisite and under-performing weapons systems, especially those intended primarily to combat technologically sophisticated opponents, such as Russia and China. The cuts would halt or scale back the F-22 fighter jet, the missile shield in Poland and the Czech Republic that the Kremlin opposes, non-workable armored vehicles for the Army’s Future Combat Systems, a new communication satellite, the C-17 transport plane, a new generation of stealth destroyers, and new helicopters to rescue downed pilots and for President Obama himself.

In place of these, Obama is boosting proposed expenditures for more boots on the ground and more plentiful, more modular, lower-tech, and somewhat lower-cost arms that make military intervention in colonial wars faster, cheaper, and – he hopes – more effective. Among the keepers:

These are the weapons systems Obama wants to help Washington police the world. Whether he gets them, and whether he gets rid of those arms that do little to serve that task, remain to be seen. Each of the wasteful weapons systems has a powerful constituency, including the companies that make them, all the sub-contractors, the unions, the communities in which all of the work is done, and the senators and representatives who feed at the military trough. But, win or lose, Obama’s first military budget reveals his global goals and the technocratic rationality with which he is pursuing them. Teddy Roosevelt would be proud.