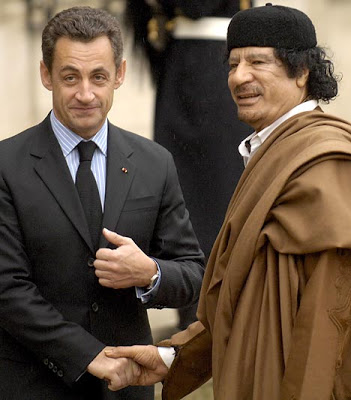 PARIS — Even as Barack Obama struggles to reduce America’s public role in the Libyan conflict, he and his supporters continue to defend the UN military intervention as necessary to stop a massacre of civilians, primarily in Benghazi. But recent reports in French and Italian media suggest that French President Nicholas Sarkozy was involved in organizing part of the armed faction of the anti-Qaddafi rebellion in Benghazi from as early as mid-November 2010.

Elements of the story are now spreading virally across the Internet, leading many bloggers to condemn Sarkozy’s skullduggery, while others reject the story as just another conspiracy theory.

The truth is difficult to track with certainty, but a careful reading of European and Israeli media strongly tends to confirm that the French did support internal defectors from an early date, fueling the crisis to which humanitarian interventionists in Washington felt they had to respond.

This story began last autumn, when a high-ranking Libyan insider turned up in Paris after a brief stopover in pre-revolutionary Tunisia. Nuri Mesmari, Libya’s chief of protocol, had worked closely with Qaddafi for some 30 years. As the usually well-informed Maghreb Confidential told its online business and diplomatic subscribers on October 21, 2010, “Normally Mesmari sticks closely to his boss’s side so there’s some talk that he may have broken his long-standing tie with the Libyan leader.”

A month later, on November 18, the influential web site reported that Mesmari, “who seemed to be joined at the hip with Libya’s leader,” had come to Paris for an operation and wanted to go into retirement. Mesmari was “one of Kadhafi’s closest confidantes and knows pretty well all of his secrets.”

What happened next is crucial, as reported on March 23 by the Italian journalist Franco Bechis, deputy editor of the right-wing daily Libero, which is owned by Italy’s embattled president Sylvio Berlusconi.

Citing documents from the French overseas spy service, the Direction Generale de la Securite Exterieure, and news from Maghreb Confidential that had circulated in French diplomatic circles, Bechis wrote that Mesmari met regularly with French intelligence officials. Given what followed, this seems almost certain, but so far, Bechis remains the only reporter who claims to have seen or heard direct evidence of the meetings.

Bechis offered two other revelations, also uncorroborated by anyone else. On November 16, 2010, at the Hotel Concorde Lafayette, he claimed, Mesmari had a long session with close collaborators of President Sarkozy. And, on December 18, a “strange French delegation” left for Benghazi, ostensibly as part of ongoing discussions to sell wheat to the Libyans.

According to Bechis, the delegation included officials of Sarkozy’s Ministry of Agriculture and executives of several companies that Maghreb Confidential mentioned on November 18 as “lining up in battle order for Libyan contracts.” But, in its report, the business service made no explicit mention of the Benghazi visit, suggesting only that the French companies would press their case after the end of the Aid el Kebir festivities, which fell last year on November 17.

“A commercial junket, on paper, in search of nothing but juicy Libyan orders,” Bechis wrote. “But, the group also includes French soldiers disguised as businessmen.”

The soldiers went to Benghazi to meet secretly with a Libyan Air Force officer whom Mesmari had identified, wrote Bechis. The officer had good contacts among Tunisian dissidents and was about to turn against Qaddafi. His name was Col. Abdallah Gehani.

Qaddafi’s security services would arrest Colonel Gehani in Benghazi on January 22, 2011, according to a brief account five days later in Maghreb Confidential.

The Libyan uprising began on February 17, initially as peaceful protest, but increasingly with an armed component.

The most telling account came on February 21 from Debkafile, an online Israeli news service that regularly cites unnamed military and intelligence sources. Their report is worth quoting at length. Cyrenaica is Libya’s eastern region, with Benghazi as its major city.

“Around two million Cyrenaican protesters, half of Libya’s population who control half of the country and part of its oil resources, embarked Sunday, Feb. 20, on a full-scale revolt against Muammar Qaddafi [Kadhafi] and his affluent ruling Tripolitanian-dominated regime,” the Israeli service reported.

Unlike the rights protests sweeping the Middle East and North Africa, in Libya, one half of the country is rising up against the other half, as well as fighting to overthrow a dictatorial ruler of 42 years.

Since last week, heavy battles have been fought in Benghazi, Al Bayda, Al Marj, Tobruk and at least two other cities. In some places, Debkafile’s military sources report protesters stormed army bases and seized large quantities of missiles, mortars, heavy machine guns and armored vehicles — and used them. The important Fadil Ben Omar Brigade command base in Benghazi was burnt to the ground.

Clearly, and although the grassroots dissidents did have some support in the west of the country, many of the February events in and around Benghazi were less like the nonviolent demonstrations that had just taken place in Tunisia and Egypt and more like a preplanned military rebellion.

In a subsequent report on February 25, the Israeli news service reported that French, British and U.S. military advisers had landed in the region the night before, dispatched from warships and missile boats off the coastal towns of Benghazi and Tobruk.

In March, other international media — including UPI, The Wall Street Journal and London’s Daily Mail — reported the early presence of foreign arms and military advisers, including some from Egypt.

While all this was going on, Mesmari himself emerged from the shadows in a twist widely reported by Agence France Presse (AFP), Radio France International (RFI) and other French media.

On November 28 or 29, 2010, depending on the report, French police formally arrested and detained him, though none of the news accounts mentioned where he was held, whether in prison or — as Bechis claims — at his hotel under house arrest. The arrest was in response to a Libyan arrest warrant accusing Mesmari of embezzling state funds.

On December 15, an appeals court freed him, calling his detention “an irregularity.” The court scheduled a hearing on extradition for December 23, but the case formally continued at least into early April.

A fuller picture of the man emerged in the December 7 issue of the Paris-based Jeune Afrique. As reported by the respected Tunisian journalist Abdelazis Barrouhi, Qaddafi had “allegedly slapped and insulted Mesmari” during an Arab-African summit held in Syrte on October 9 and 10. Barrouhi speculated that Mesmari also blamed the Libyan government for the fatal shooting of his son in 2007.

Barrouhi portrayed Mesmari as a character, known for the blond coloring of his hair and goatee and his satin costumes created by famous designers. Mesmari was not a military man, though he often appeared in uniform bristling with decorations. He was instead the son of a government minister in the old Libyan monarchy and a specialist in communications who had worked in the hotel trade.

If Mesmari appeared a comic opera figure, not alone among the Libyan elite, Barrouhi made clear what a huge catch he was for French intelligence.

“Officially director-general of protocol — a job theoretically under the minister of Foreign Affairs — he was much more than that,” Barrouhi explained. Mesmari organized visits to Libya by foreign chiefs of state as well as Qaddafi’s frequent trips abroad, sitting in on the secret conversations aided by his command of several languages, including English and French. He knew Qaddafi’s habits, likes and dislikes, sicknesses and medicines, moods, friends and secret networks, enemies, and the beneficiaries of the suitcases stuffed with dollars or euros that Qaddafi had Mesmari pass around.

In a contradictory barrage of reports, Maghreb Confidential similarly emphasized the political and espionage side of the story. On December 2, when news of Mesmari’s arrest first became public, the editors declared that Mesmari had bolted. In their words, “His defection has infuriated Kadhafi and undercuts the position of foreign minister Mussa Kussa.”

On December 9, the editors went farther. “Fearing for his life, Mesmari has asked for political asylum,” they reported. “Formerly close to Muammer Kadhafi, he has been described as a ‘Libyan Wikileak’ because of everything he knows about the regime.”

On December 23, Maghreb Confidential appeared to backtrack, reporting that Mesmari had resumed his normal functions as Qaddafi’s protocol chief. “Nuri Mesmari, who is currently residing at the Concorde Lafayette hotel in Paris, met with a number of his Libyan friends in a posh restaurant on the Champs Elysees,” they wrote. “According to our sources, he is preparing for his return to Tripoli after making contact with Libyan officials.”

But the editors sounded a note of caution, pointedly asking, “Has everyone forgotten his application for political asylum and an arrest warrant issued against him for embezzlement?”

According to Bechis, Mesmari’s visitors included three leaders of the February 17 movement that Qaddafi’s security police would arrest before the Benghazi uprising, as reported once again by Maghreb Confidential.

Various media continued to tell of Mesmari’s murky relations with Tripoli, while Mesmari himself repeated that he had come to France because of heart problems. But, on February 21, as the uprising showed its military planning, Mesmari came in from the cold, appearing in a videotaped press conference at the offices of the Parisian daily Liberation. He wore a straightforward sport coat and sounded like a representative of the Libyan rebels.

Qaddafi was creating “a massacre every hour, every moment and everywhere,” he declared. But “with the strength and struggle of the people, the Qaddafi regime will fall.”

Mesmari never mentioned how he had given France its biggest intelligence coup in years, nor how Sarkozy used the information to begin working with the armed faction of the rebellion in Benghazi.

[A veteran of the Berkeley Free Speech Movement and the New Left monthly Ramparts, Steve Weissman lived for many years in London, working as a magazine writer and television producer. He now lives and works in France, where he writes on international affairs. This article was also posted to truthout.]