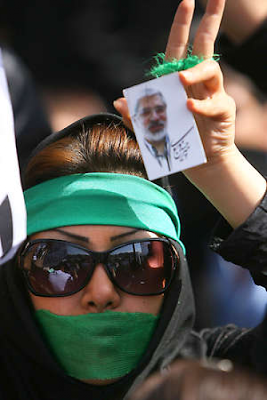 Photo from BrooWaha.com.
Iran: Seen to Be Meddling

Our multimedia meddlers sought… to help mobilize the millions of Iranians who had already turned against the regime of Ahmadinejad and were questioning the theocratic rule of the ayatollahs.

Between threats from hard-line ayatollahs to execute protest leaders and the media frenzy over the death of Michael Jackson, Iran’s “Green Revolution” appears to have stalled. But, it’s far from over.

Unless President Obama or Congress cut off their funding, our official radio and TV services, the shadowy National Endowment for Democracy and the State Department’s “democracy-promoters” will all keep fighting to the last Iranian, while the CIA and Pentagon continue sending their state-sponsored terrorists into Iran. Then, as likely as not, the meddlers will hand off to the “bomb Iran” crowd, whose solidarity with the Iranian protesters extends to blowing them to smithereens.

Covert action does not go away just because TV cameras turn away. And neither should its critics, who need to explain more clearly what Washington and its allies have been doing in Iran. For most people, one question stands out: How could outsiders possibly call millions of gutsy Iranians onto the streets?

The answer is basic. Outsiders could do nothing if not for the very real discontent within Iran and the courage of Iranians to protest. Even in its heyday, the CIA had trouble making something out of nothing, though it came close in Iran in 1953 when it paid protesters to take to the streets against the nationalist Prime Minister Mohammad Mossaddeq. That was truly a rent-a-mob.

Now in the digital age, our multimedia meddlers sought instead to help mobilize the millions of Iranians who had already turned against the regime of Ahmadinejad and were questioning the theocratic rule of the ayatollahs. Much of this target audience fell among the young urban middle class, who were savvy about online, mobile and digital media. To these people, Washington provided what Peter Ackerman and Ramin Ahmadi called “a clear strategic vision and steady leadership.”

This strategic vision and leadership included several elements, some of which I highlighted in earlier columns: Training sessions and field manuals on nonviolent tactics. A vast infusion of new media, especially Twitter and Facebook. And the coordinated messaging of the big western bullhorn, especially the BBC’s Farsi language services, Radio Free Europe/Radio Liberty’s Radio Farda, and Voice of America’s Persian Service, which before the election, according to CNN, “bought extra satellite paths into Iran to avoid any government jamming.”

Expatriate Iranian satellite TV, mostly from the Los Angeles area, would add to the cheerleading, as would most of the commercial mass media.

With all this in place, Washington had to answer a truly divisive question. Should the meddlers support Iranian opposition groups who wanted to boycott their country’s presidential elections? Or should they covertly back former prime minister Mir Hossein Mousavi, who had taken part in the creation of Lebanon’s Hezbollah and the killing of Iranian dissidents? In democracy-promotion American style, Washington gets to pick which “democrats” to promote. The nod went to Mousavi.

A week before the election, Voice of America’s (VOA) Persian Service reported that a hard-line ayatollah had issued a fatwa authorizing election supervisors to change votes to make sure that Ahmadinejad won. Whether the fatwa ever existed remains a mystery. But the extensive coverage that VOA gave the story laid the groundwork for the “Green Revolution” that was to follow.

Mousavi gave the signal to start. Hours before the voting ended, he loudly declared himself “definitely the winner,” suggested that the government was trying to steal the election, and opened the door to major protests. This was the script, to which Mousavi stuck in the days that followed.

The Iranian government responded that Ahmadinejad had won an overwhelming majority, and the battle lines were drawn. Foreign scholars might debate whether Ahmadinejad or Mousavi won and by how much, providing ammunition for pundits on all sides. But to Mousavi and the Western meddlers, as to Ahmadinejad and the supreme leader, Ayatollah Ali Khamenei, the actual vote no longer mattered, if it ever did.

The big Western bullhorn quickly spread Mousavi’s claims all over Iran and the world, as did the new media, churning out tens of thousands of messages saying that the government had stolen the election and calling for huge protests in the streets. Facebook and Twitter offered an added advantage. Anyone could anonymously post messages, and who would know whether they came from Tehran, Dubai, Jerusalem or Washington?

With continuing support from both the Western bullhorn and the new media that Washington had worked so hard to promote, the “Green Revolution” took to the streets. Naturally, the protests took on an ebb and flow of their own that no one could predict or control. They are now in an ebb, but the protesters will return in time, likely with industrial action and a general strike that Western meddlers will continue to support.

But, we have an alternative. Just think how much more credibility the protesters would have with their own people if, before the next round, Washington publicly pulled the plug on all our many bureaucracies that intervene so blatantly in other countries.

President Obama has famously said that he did not want “to be seen to be meddling” in Iran’s election. He would do better if, as he tried to do with torture, he made absolutely clear to Americans and the world that we should not and will not meddle, whether seen or not.

For previous articles by Steve Weissman on The Rag Blog, including earlier posts on this subject, go here.