Steve Weissman :
We are all Charlie, even as political hacks steal Charlie’s soul

Within days, the French political elite and their international allies were using the tragedy to sell new policing measures. 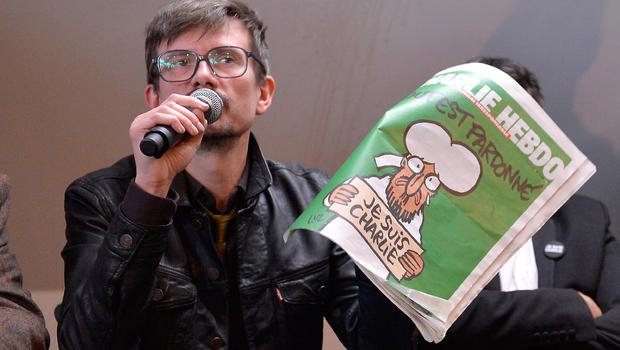 DORDOGNE, France — The Islamist terrorists who killed 12 cartoonists and journalists of Charlie Hebdo took only their lives, which was more than horrific enough. But within days of the massacre, the French political elite and their international allies added to the crime, setting out to steal the soul of an incomparable group of free thinkers in an effort to sell new policing measures.

Proudly left-wing, anti-racist, and against all forms of authoritarianism, the mischievous French anarchoids at Charlie Hebdo have long embodied the real meaning of free speech — and not some abstract notion that loses all meaning when mouthed by people who hate what the satirical weekly represents.

For the 12 cartoonists and journalists who gave their lives, speech had content.

For the 12 cartoonists and journalists who gave their lives, speech had content. They used it to protest most of what the French and global elite stand for, including the economic austerity that kills jobs and hope, builds support for racist hate groups like Marine Le Pen’s Front National, and further alienates disaffected younger people from immigrant families. Count among them the three homegrown “Fools of God” who killed the Charlie Hebdo cartoonists and journalists and the four Jewish hostages at the kosher supermarket in eastern Paris.

Go beyond the heavy politics and take Charlie Hebdo’s ridicule of the Prophet Mohammed, which their killers claimed to avenge and which those in power are doing their best to wish away. The cartoons were outrageously obscene. How much more lascivious can anyone get than to publish garishly colored cartoons of a leading religious figure getting butt-fucked? The drawings, along with sly jokes about “Charia Hebdo,” obviously offended believers. The authors intended to offend them, put them on the defensive, and have fun doing it.

This is a rough way to do politics, and the dangers are obvious.

This is a rough way to do politics, and the dangers are obvious, especially in a week of such cold-blooded carnage. No one with any decency wants to fuel prejudice against a minority already under attack by Islamophobes, both Christian and Jewish. Many of us share the fears Teju Cole raises in The New Yorker, that cartoon images of hook-nosed Arabs or Jews, bullet-ridden Korans, and black caricatures may be hard to differentiate from “a bullyingly racist agenda.” Most of us accept Cole’s argument that “It is possible to defend the right to obscene speech without promoting or sponsoring the content of that speech.”

But, at their best, Charlie Hebdo has taken an equally principled position, and one that defends important values. The people there, past and present, see an enormous danger in a world of clerical dictatorships, religious repression, fatwas, censorship, puritanism, and the subordination of women.

Attempting to offend everyone, they aim their comic barbs and investigative journalism at the Islamophobes as well, defending an Enlightenment love of skepticism and rationalism against any and all medieval mindsets. They also understand that violence by self-proclaimed Jihadists is far from the greatest threat to liberty in Western societies, and that (in the words of Teju Cole) “violence from ‘our’ side continues unabated.”

Now, the French and their allies will escalate the violence in the name of defending against it.

Now, the French and their allies will escalate the violence in the name of defending against it. Make no mistake: the terrorists are real. But they are only one side of the conflict, and they see themselves defending against violence, insults, and disrespect from “our” side, whether in their ancestral homelands or in the daily discrimination and economic helplessness they face here in France, throughout Europe, and in the United States.

The politicians, media, and think tanks here are discussing little or nothing that would defuse the conflict. They seek only to strengthen their ability to wage a more effective fight in what they still insist on calling “the global War on Terror.”

Without a crystal ball or high-placed source in the Ministry of the Interior, no one can know exactly what measures to expect. But the Socialist prime minister Manuel Valls, a former Interior minister and future presidential candidate, gave a clue when he declared that there would be a “before Charlie” and an after. Valls knows that he echoes the political line of the Bush administration after 9/11, and he was signaling a massive strengthening of the French security apparatus.

Prime Minister Valls knows that he echoes the political line of the Bush administration
after 9/11.

Valls and President Francois Hollande will do everything they can to differentiate the measures they take from the U.S. Patriot Act, which has a very bad odor here in France. But they will almost certainly strengthen security cooperation and a greater exchange of intelligence information with Washington, London, Berlin, and the smaller European nations as well. The cooperation is widely expected to include a European database with credit card and travel information down to whether the individual ordered a special kosher or halal meal inflight. Obama’s lingering attorney general is in Paris to discuss all this with French and European officials.

Though excluded from the 5-Eyes agreement among the Anglos — the U.S., Britain, Canada, Australia, and New Zealand — the French have their own ability to read emails and listen to phone calls. They lack only the ability to analyze all that information. Will the NSA build up their capacity? It seems highly likely, and they will do it in return for access to whatever the French spooks discover.

Also in the works, the French will almost certainly strengthen their legal authority and human resources to monitor those they suspect of Islamist sympathies and to hold them in jail for longer periods on mere suspicion. The government will also monitor Internet usage more closely, while the Interior minister has already announced he will “work with” major companies to close down Islamist websites.

All this drawing a blank check from the three million or so people marching in Paris and around the country and in the name of free speech, a free press, and the love of freedom embodied by the martyrs of Charlie Hebdo.

This article was first published at Reader Supported News and was cross-posted to The Rag Blog by the author.

[A veteran of the Berkeley Free Speech Movement and the New Left monthly Ramparts, Steve Weissman lived for many years in London, working as a magazine writer and producer for the BBC. He now lives and works in Dordogne, deep in the French countryside, where he writes on international affairs. His work appears regularly at Reader Supported News and has previously been published by Truthout, Salon, and The Rag Blog.]