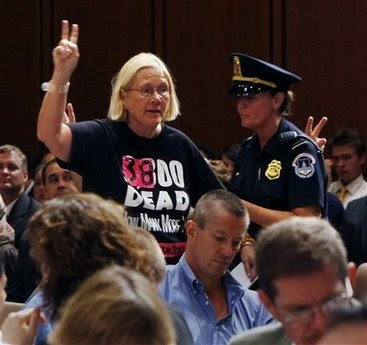 Antiwar Group Fears Speakers will be Blocked at Border
by Doug Ward / May 31, 2008

VANCOUVER – Organizers of an antiwar conference in Vancouver this weekend fear that Canada Border Services may prohibit their keynote speaker, retired U.S. Army Colonel Ann Wright, from entering the country.

Wright was denied entry into Canada twice last year because her name is on a FBI watch list due to misdemeanor convictions stemming from her participation in antiwar demonstrations.

“The Canadian government should not be using this FBI list as a basis for denying entry into Canada,” said Issac Romano, organizer of the Our Way Home conference, which is honouring American women who came to Canada during the ’60s and ’70s due to their opposition to the Vietnam War.

Romano said it is “ironic” that Canada would bar Wright considering that Canada decided not to join the U.S.-led invasion of Iraq and welcomed American draft dodgers and deserters during the Vietnam War.

After a long career in the army, Wright joined the U.S. State Department in 1987, serving as a diplomat in various countries.

She resigned from the State Department over the U.S. invasion of Iraq. Since then Wright has emerged as a leading American antiwar activist.

She has been arrested at protests many times, including when she disrupted a Senate committee hearing at which the top American military official in Iraq, Gen. David Petraeus, was testifying.

Wright, in an interview from California, said the FBI watch list was set up to keep track of “hardened criminals.” But the Bush administration has put the names of arrested peace activists on to the list in order to suppress dissent against the Iraq war, she added. “It’s pure political intimidation.”

Medea Benjamin, another leading U.S. antiwar activist, is also scheduled to speak at the Vancouver conference. But Benjamin was similarly turned back last year by Canadian border guards because her name is on the FBI list.

Wright said that Canada showed independence by not fighting in Iraq, “so it baffles me why the Canadian government trusts a politically-tainted list that the Bush administration is putting out.”

Wright said she hoped to use her Vancouver speech to urge Canadian politicians to provide sanctuary to American soldiers who desert over their opposition to the Iraq conflict.

Parliament is expected to vote Tuesday on a motion, calling upon the Canadian government to allow U.S. war resisters to stay in Canada.

Libby Davies, the NDP MP from Vancouver East, intends to accompany Wright and Benjamin in their attempt to cross the border Sunday morning at the Peace Arch border crossing.

“These two women are not criminals. They are peace activists,” Davies said.

Chris Williams, an Ottawa-based spokesman for the CBS, declined to comment on why the two activists had been barred previously, citing federal privacy rules.

Williams also refused to say whether Wright and Benjamin would be denied entry again on Sunday because their names are on a FBI list.

The CBS official said that every visitor is assessed on a “case-by-case” basis and that a criminal record is one factor border guards use in assessing admissibility into Canada.