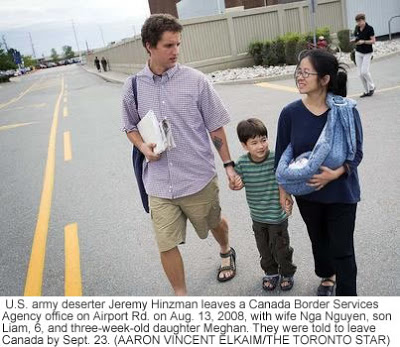 American war resister Jeremy Hinzman has been ordered out of the country after a four-year legal battle to earn a home in Canada.

A U.S. Army deserter, Hinzman was the first post-Vietnam War resister to file for refugee status when he arrived in Canada in January 2004 while fleeing a scheduled deployment to Iraq.

Several bumps in the road later, he received a deportation order yesterday from the Canada Border Services Agency after an immigration officer rejected a pair of his last-ditch attempts to remain in the country.

He and his family have been ordered to leave by Sept. 23.

“I’m tremendously disappointed,” Hinzman said yesterday, apparently fighting back tears following the decision. “(But) life goes on and we’ll make the most of it wherever we end up.”

Friends and family joined Hinzman yesterday morning outside the Mississauga offices of the border services agency where he received the decision.

His wife, Nga Nguyen, cradled the couple’s three-week-old daughter, Meghan, while their 6-year-old son, Liam, smiled and ran around in circles as his father hugged crying supporters.

He fled to Canada in 2004, just weeks after learning of his scheduled deployment to Iraq to fight in a war he says is both illegal and immoral.

After his initial refugee application was denied in March 2005, Hinzman launched a series of court appeals, all of which were rejected. A bid to take his case to the Supreme Court was rejected in November 2007.

Yesterday’s decision slammed the door on two of his remaining options to stave off deportation – a pre-removal risk assessment and a humanitarian and compassionate review.

Either could have seen him granted permanent residency had the officer reviewing the case found he would face persecution, torture or otherwise unfair treatment if returned to the U.S.

If returned, he could face a return to his unit or a court martial for desertion – a felony offence that would come with possible jail time.

Despite his uncertain future, though, Hinzman said had no regrets about deserting his unit in the name of a principled stand.

“(Iraq) was an unjust war based on false pretenses,” he said.

“Every soldier who refused to fight has probably saved a lot of lives.”

He said he would now consider whether to appeal the decision, a path taken by fellow resister Corey Glass, whose deportation order is on hold while the Federal Court decides whether to review his case.

Meanwhile, Lee Zaslofsky, of the War Resisters Support Campaign, said his group would continue to fight for Hinzman and the estimated 200 other resisters living in Canada.

“We’re going to be appealing to all Canadians to let the government know that this kind of thing has got to stop,” he said, noting a non-binding opposition bill passed in Parliament earlier this year that called on the government to allow resisters such as Hinzman to stay.

A nationwide poll conducted in June found two-thirds of Canadians would support a decision to allow the resisters to stay.

“(The government) must implement the will of Parliament and the people of Canada,” Zaslofsky said.

This entry was posted in RagBlog and tagged Canada, Deserters, U.S. Military. Bookmark the permalink.