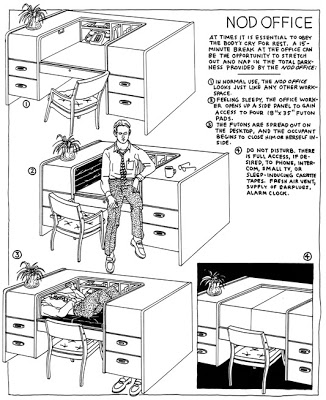 This is a relentless age we’re living in, a time when innovative solutions — or any solutions, for that matter — to our seemingly infinite problems seem in short supply.

So how do we come up with new ideas? How do we learn to think outside of normal parameters? Are the processes in place for doing so flawed? Do we rely too much on computer models? On consultants? On big-idea gurus lauding the merits of tribes and crowds or of starfish and spiders? On Twitter?

At the risk of sounding like a big-idea guru myself, I can’t help thinking that we’re all so mired in it that we’ve forgotten how to get out of it — how to daydream, invent, engage with the absurd.

That’s why I am so enamored with the work of inventor/author/cartoonist/former urban planner Steven M. Johnson, a sort of R. Crumb meets R. Buckminster Fuller. Johnson is a former urban planner, and his work tends toward the nodes where social issues intersect with design and urban planning issues.

In discussing his often fantastical, sometimes silly, sometimes visionary concepts, he has said, “If I could use two words to describe what it is that I enjoy it is that I love to be sneakily outrageous . . . [It may be that] I have decided an idea has no practical worth and would never be likely to be adopted seriously (like most of my ideas), but I like it anyway.”

A latent inventor, Johnson discovered his “ability” only at age 36 in 1974, when he was the editorial cartoonist for The Sierra Club Bulletin and the editor, Roger Olmsted, asked him to invent whimsical recreational vehicles. Olmsted asked for 16; Johnson gave him 109. “I had never invented anything before,” he told me in an e-mail recently, “because no one had ever asked me to invent anything!” 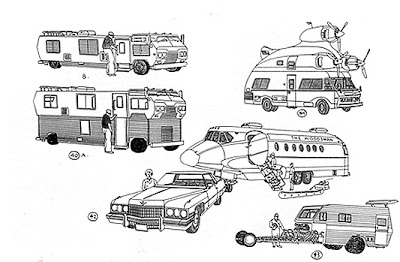 Variations on the theme of recreational vehicles. Steven M. Johnson. (Click to enlarge.)

It would be ridiculous to suggest that the powers that be should do nothing but give in to their wild imaginations. But there’s something to Johnson’s explorations that warrants our attention. It may be, as the title of his 1984 book suggests, exactly “What the World Needs Now: A Resource Book for Daydreamers, Frustrated Inventors, Cranks, Efficiency Experts, Utopians, Gadgeteers, Tinkerers, and Just About Everybody Else.”

As the 70-year-old told me last week, “America has been falling into a depression, a psychological depression, for many years. Yet this is a land of pioneer inventors. It annoys me that an untrained person like myself can think up products easily (in fact I usually spend energy ‘turning off’ the idea-generating machine just as psychics train themselves to turn off their capability) and yet the nation seems to sit helplessly passive and wait to be saved somehow.”

So maybe there are some lessons to be learned from Johnson.

Many of his musings are simply whimsical, existing primarily as a source of inspiration or delight. Others tackle very real issues, from environmentalism to alternative transportation to homelessness. Here, a look at both ends of the spectrum.

Every worker would appreciate the Nod Office (1984), an ingenious desk that can be transformed into a hidden sleeping chamber, perfect for late afternoon naps. Owning such a contraption remains for me a significant yet unrealized career goal.

Anyone who ever left the house without eating breakfast will appreciate his dashboard toaster oven. (Another feature, the Automobile Snack Conveyer, allows you to deliver that toast to your kid in the back seat.)

Variations on the theme of recreational vehicles. Steven M. Johnson.

Yet there’s a darker side to Johnson as well, as evidenced by this much more recent exploration, drawn in 2009, of office cubicles: these are now used not just for afternoon siestas but to offer working seniors, unable to retire in this economy, a much-needed place to rest. 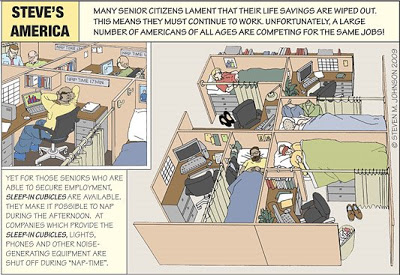 In Johnson’s oeuvre, nothing gets to exist if it doesn’t have at least two functions: the skylight uses solar energy to cook the dinner, for instance, and the exercise bike operates the washing machine (cleaning clothes and toning the wearer’s muscles simultaneously). 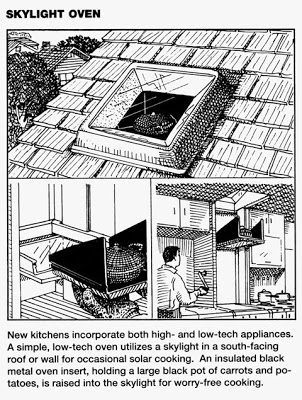 “Accessories with a purpose,” drawings from 1991, include such then seemingly silly items as “hands-free phones” and “pouchpants” (a tragically unflattering variation on what would become the still tragically unflattering fanny pack). A very small apartment might house the Hide-a-Shower, a sofa that can be upended for bathing. Murder on the upholstery, no doubt.

Johnson has even done a series of drawings on how not to invent: here, a radio powered by a coffee grinder (2005). Other bizarre explorations include adjacent commodes in an exploration of Toilets for Immodest Times. And the Cigaire smoke hood, which redirects cigarette smoke from the smoker’s mouth into a stylish helmet, a variant of which Johnson actually saw at an inventors’ convention in 1989. 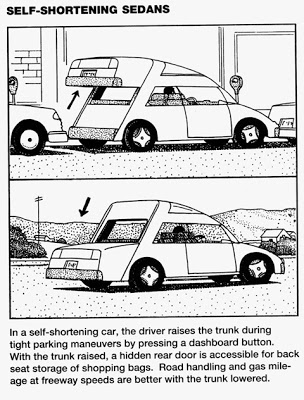 Transportation figures prominently in Johnson’s work, much of it showcased in his second book, “Public Therapy Buses” (1991). Again, many of his concepts are simply cute and clever, like the self-shortening sedan with its adjustable bumper (combines the stability of a larger car with the parking convenience of a tinier one), or the View Cab (puts some power back in the hands of the drivers of compact cars). 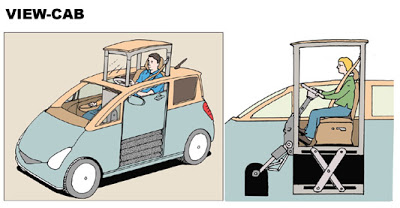 Other Johnson transportation ideas do move increasingly, if not entirely, toward practicality, like the clever albeit cumbersome Bike Vest: 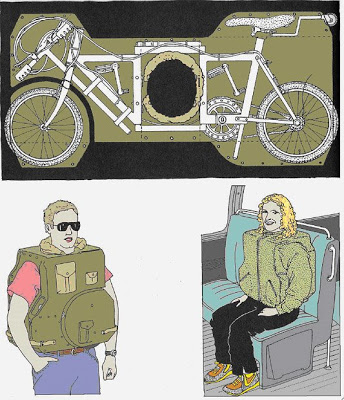 A golf-cart-meets-treadmill contraption seems to predate the Segway. 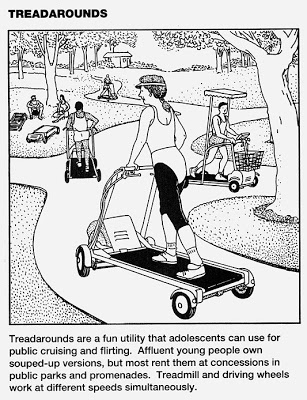 Some of his transit concepts begin to address tangible issues. Automobile Abandonment Zones intuit the very contemporary possibility of commuters fleeing gridlock for a nearby train, willingly relinquishing their keys to Abandonment Officers. 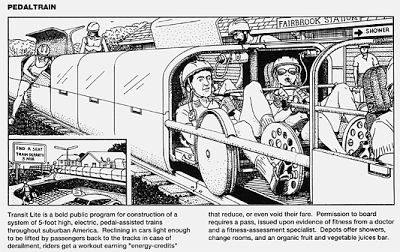 It was nearly 20 years ago, in “Public Therapy Buses,” that Johnson predicted that shopping malls would be given over to mega-malls for consignment and thrift items. He was pretty on-target with concepts like Landfill Surprise: The Quality Trash Store. 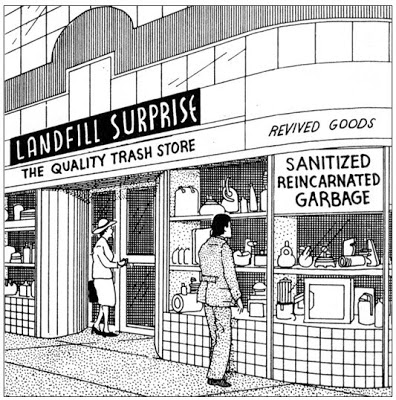 And his Neighborhood Sharing Booths, designed to provide food, water and clothing from kiosks on neighborhood lawns, seem eerie predictors of the current reality of foreclosed subdivisions.

Fans of prefab can appreciate flexible housing concepts like “Rooms Added a Piece at a Time” and “Homes Purchased by the Room,” while builders of gated communities, tongue firmly out of cheek, clearly missed the intended irony of Johnson’s “Double-Walled Communities,” in which “developers gain approval from planning departments to build double-walled communities for wealthy executives,” or his “Monitowers” — staffed towers in subdivisions that feature surveillance cameras.

What fascinates me about Johnson is his ability to riff on anything, from a sort of frivolous contraption called a brief skate (yes, a briefcase that morphs into a skateboard — perfect for today’s unemployed boomers) to a wholly prescient formed concept like Oakville, a gasoline-and-diesel-engine free city that features a freeway for electric cars and bicycles, and a medieval-like perimeter wall that keeps polluting cars out. He can be so out there as to make one think he shouldn’t be taken seriously until you realize just how serious his thinking can be.

To be sure, there’s no small amount of goofiness in Johnson’s creations, but deeper exploration into his decades of inventions show not only a complex and intuitive mind but real visionary tendencies. His mental process? It’s one he describes as “Mix-’N-Match, outrageous extrapolation, speeded-up thinking, random/lateral thinking (which comes close to the hypnagogic state between waking and sleep where some claim inspired inventions and scientific inventions come through), and so forth.”

He writes of avoiding his desk when inventing, avoiding the connotations of serious endeavor, of earning a living. “I wish instead,” he writes, “to be irresponsible, rash, associative, dreamy, impish, brainy, intuitive, and stupid.” Which seems, to me, about the right strategy for our times.

[Allison Arieff is editor at large for Sunset, and the former editor in chief of Dwell magazine. She is co-author of the books “Prefab” and “Trailer Travel,” and the editor of many books on design and popular culture, including “Airstream: The History of the Land Yacht” and “Cheap Hotels.” Ms. Arieff lives in San Francisco.]

This entry was posted in RagBlog and tagged Artistic Freedom, Inventors, R. Crumb. Bookmark the permalink.

1 Response to Steven Johnson: Making Something More of Imagination