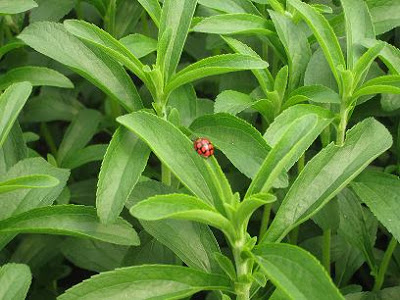 There’s good news in the fight against diabetes: the Food and Drug Administration (FDA) has approved stevia (Stevia rebaudiana) as a food and beverage sweetener! Stevia, a South American plant, has some of the sweetest compounds in the world, but they don’t raise blood sugar levels. Used as a sweetener in South America for years, before FDA approval it was available here only as a “dietary supplement.”

Now, soft drink and snack giant PepsiCo says it will make a line of drinks and foods with stevia instead of sugar or artificial sweeteners; hopefully, others will follow. Stevia is also available now, under different brand names, alongside sugar in the baking aisles of local supermarkets; ask for it if you don’t see it! Stevia can be used in baking, but because it is so sweet, may require recipe changes, or products specially made for baking. Look at package directions to find what works for you!

Millions of people worldwide have diabetes, a killer disease that is very difficult to manage, often causing lost limbs and/or blindness. It is linked to obesity, cardiovascular (heart) disease, and other serious conditions. Some diabetes is hereditary, while adult onset diabetes (type II) is thought to result in large part from poor eating habits. In the US, Hispanic, Native American, and Black people are particularly at risk. Although there is much less diabetes in Asia, Asians who adopt a “typical” US diet (refined sugar, refined flour, fried foods, fatty red meats) raise their risk. People who are sedentary are more at risk than those who are active. Millions more people are “borderline diabetic,” with blood sugar levels just below those requiring treatment.

Although originally from South America, stevia does well in Austin’s climate. Grow it to make your own inexpensive stevia sweetener! Seeds or plants may be obtained locally in the spring, ask your favorite nursery. Seeds may be purchased on-line from several sites, just search for “stevia seeds.” Stevia plants like sunny or partly sunny spots with good drainage. They need enough water to not droop in the heat. Mulching helps them survive the heat. In Austin, they are a “perennial” that dies down in the winter and sends up new shoots in the spring.

It is best to not harvest stevia the first year, whether you start with seeds or plants. The root system is shallow and broad, and needs time to develop. You can grow stevia in a container, but the roots need lots of room; a wide, shallow pot is better than a tall, narrow one. Outdoors, plants self-seed easily. Start with three and in five years you’ll have a forest! Some say stevia plants become unproductive after three years; personal experience says “not so!”

When it dies back in winter, break off the dry stalks, but leave something sticking above ground so you’ll know where the plants are. When new shoots emerge, make sure they have water, sit back, and watch them grow. Stevia produces 2–3 foot tall fuzzy stalks and lots of leaves. As with any herb, harvest before flowers open (stevia’s are small white clusters). Harvest stems and leaves (leave the roots), rinse well, and pat them dry. Place in a clean paper bag and hang it to dry for several days in a well-ventilated area. Store dry stevia in glass containers as you would any herb.

To make stevia water, pack a heat-proof container (a Pyrex pitcher works well) with fresh or dried stevia. Pour boiling water in to cover completely (use a spoon to push/tamp the stevia down; it will try to float). Make sure the water has reached a rolling boil. Cover the container and set aside until cool, at least three hours. Then, either strain out the stevia or refrigerate the container to steep overnight before straining. Longer steeping produces stronger sweetness. After discarding the stems and leaves, you have stevia water! Made from freshly picked stevia, it is a pale honey color; from dried it looks like flat cola. Store as a liquid in the refrigerator, or freeze in an ice cube tray and store the cubes in the freezer.

Stevia water may be used to sweeten coffee, tea, lemonade or limeade to taste (a few drops will do it!), on cereal, to help sweeten fruit pies, and in home-made slurpees, crushed ice drinks, or sherbets; the possibilities are endless. For anyone concerned about blood sugar, stevia is a sweet alternative, and even folks who aren’t concerned about their “sugar” will enjoy stevia-sweetened foods!

[Kate Braun, an experienced psychic, teacher, co-op activist, and gardener, often writes about herbs, and grows and uses them in her own home kitchen. Mariann Wizard writes about regulatory matters and reviews scientific research on herbs and alternative medicine for the American Botanical Council. Both are regular contributors to The Rag Blog.]