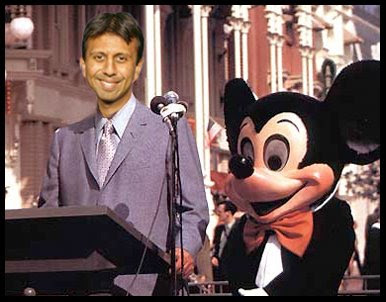 Graphic by Larry Ray, The Rag Blog, with apologies to Mickey.

Even Rush Limbaugh had to scratch around in the back of his painful plaudit pantry to try to put some sort of positive face on Jindal’s threadbare recitation.

Louisiana Gov. Bobby Jindal has weakened Republican credibility even more after delivering his response to President Obama’s speech to Congress on Tuesday night. The Associated Press noted that Jindal’s speech, broadcast nationwide from the Louisiana Governor’s mansion, was, “Insane. Childish. Disaster. And those were some of the kinder comments from political pundits.”

Even Rush Limbaugh had to scratch around in the back of his painful plaudit pantry to try to put some sort of positive face on Jindal’s threadbare recitation. Blaming President Obama for being an inspirational orator, Rush grumbled, “We cannot shun politicians who speak for our beliefs just because we don’t like the way he says it.”

The choice of the 37 year old Jindal, a relative political newcomer, to be the one to deliver his party’s party line was certainly consistent with other recent lackluster GOP selections including Alaska Governor, Sarah Palin as their Vice Presidential candidate and recently elected National Republican Committee Chairman, Michael Steele whose most noticeable talent is divisive ranting right off the bat.

Sarah Palin, who is basically clueless, can at least connect with the dwindling rabid hard core Right Wing base when given a list of talking points. Jindal fell flat with Republicans as well as Democrats as he unconvincingly mumbled his way through tired ‘government is the problem’ sop. New York Times conservative columnist, David Brooks, minced no words about Jindal’s comments given the dire economic crisis the nation now faces, calling them,”insane” and tone-deaf.”

Jindal is the son of Indian immigrants, and, unlike Sarah Palin, is, indeed, a Rhodes Scholar. He has attracted the attention of the GOP because of his improbable political rise to power in Louisiana. Interestingly, Jindal and Palin have extreme religious experiences in common. Palin, a Pentacostal who speaks in tongues, had an African witch doctor on a visit to her church chant and pray to cast out any lingering demons that might be after her. The demon bashing ritual, held in Palin’s Alaska church, is still a YouTube favorite.

Jindal, a devout Catholic, detailed in an essay he wrote in 1994 for The Oxford Review how he took part in an exorcism to cast out a supernatural spirit that had possessed his friend. Jindal wrote that he believes her cancer was even cured by their ritual in addition to sending the demon packing. Palin and Jindal both scare the hell out of many Americans.

It may be telling that Governor Jindal, after delivering his Obama response, later went upstairs and helped his wife and children pack for a planned trip to Disney World. You can’t make up this stuff. They left today and I have to wonder if Bobby will make a visit to The Hall of Presidents in Liberty Square at Magic Kingdom Theme Park his first stop. It is a 23-minute stage show featuring every American president, past and present. Then, after that he could find a nice spot on the street outside to watch the ‘Disney Dreams Come True Parade.’ It passes right by the Hall of Presidents.

Jindal needs a nice vacation from work before he returns home to Louisiana to refuse tens of millions of dollars in federal emergency unemployment benefit stimulus assistance. He won’t accept the needed Federal money because that would mean Louisiana would finally have to expand access to unemployment insurance programs in his state to part time and other workers who now get nothing under ancient deep-South eligibility requirements.

Jindal makes it clear that he thinks that kind of use of federal dollars to help folks who need it most is just plain Goofy.