This is the most cogent argument against drug prohibition that I have read. And it couldn’t be more timely.

The logic here is so clear that one wonders how so many have been so blind for so long. Or might it have something to do with the established economic interests served by maintaining the status quo and the political cowardice that has stood in the way of change? 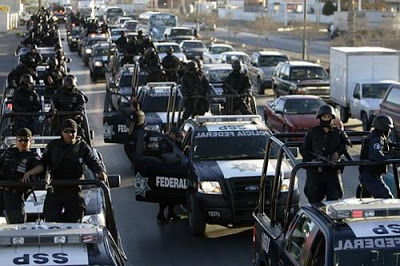 The face of the drug war on the U.S.-Mexico border.
‘The only way to reduce violence… is to legalize drugs. Fortuitously, legalization is the right policy for a slew of other reasons.’

[Jeffrey A. Miron, is senior lecturer in economics at Harvard University.]

CAMBRIDGE, Mass. — Over the past two years, drug violence in Mexico has become a fixture of the daily news. Some of this violence pits drug cartels against one another; some involves confrontations between law enforcement and traffickers.

Recent estimates suggest thousands have lost their lives in this “war on drugs.”

The U.S. and Mexican responses to this violence have been predictable: more troops and police, greater border controls and expanded enforcement of every kind. Escalation is the wrong response, however; drug prohibition is the cause of the violence.

Prohibition creates violence because it drives the drug market underground. This means buyers and sellers cannot resolve their disputes with lawsuits, arbitration or advertising, so they resort to violence instead.

Violence was common in the alcohol industry when it was banned during Prohibition, but not before or after.

Violence is the norm in illicit gambling markets but not in legal ones. Violence is routine when prostitution is banned but not when it’s permitted. Violence results from policies that create black markets, not from the characteristics of the good or activity in question.

The only way to reduce violence, therefore, is to legalize drugs. Fortuitously, legalization is the right policy for a slew of other reasons.

Prohibition of drugs corrupts politicians and law enforcement by putting police, prosecutors, judges and politicians in the position to threaten the profits of an illicit trade. This is why bribery, threats and kidnapping are common for prohibited industries but rare otherwise. Mexico’s recent history illustrates this dramatically.

Prohibition erodes protections against unreasonable search and seizure because neither party to a drug transaction has an incentive to report the activity to the police. Thus, enforcement requires intrusive tactics such as warrantless searches or undercover buys. The victimless nature of this so-called crime also encourages police to engage in racial profiling.

Prohibition has disastrous implications for national security. By eradicating coca plants in Colombia or poppy fields in Afghanistan, prohibition breeds resentment of the United States. By enriching those who produce and supply drugs, prohibition supports terrorists who sell protection services to drug traffickers.

Prohibition harms the public health. Patients suffering from cancer, glaucoma and other conditions cannot use marijuana under the laws of most states or the federal government despite abundant evidence of its efficacy. Terminally ill patients cannot always get adequate pain medication because doctors may fear prosecution by the Drug Enforcement Administration.

Drug users face restrictions on clean syringes that cause them to share contaminated needles, thereby spreading HIV, hepatitis and other blood-borne diseases.

Prohibitions breed disrespect for the law because despite draconian penalties and extensive enforcement, huge numbers of people still violate prohibition. This means those who break the law, and those who do not, learn that obeying laws is for suckers.

Prohibition is a drain on the public purse. Federal, state and local governments spend roughly $44 billion per year to enforce drug prohibition. These same governments forego roughly $33 billion per year in tax revenue they could collect from legalized drugs, assuming these were taxed at rates similar to those on alcohol and tobacco. Under prohibition, these revenues accrue to traffickers as increased profits.

The right policy, therefore, is to legalize drugs while using regulation and taxation to dampen irresponsible behavior related to drug use, such as driving under the influence. This makes more sense than prohibition because it avoids creation of a black market. This approach also allows those who believe they benefit from drug use to do so, as long as they do not harm others.

Legalization is desirable for all drugs, not just marijuana. The health risks of marijuana are lower than those of many other drugs, but that is not the crucial issue. Much of the traffic from Mexico or Colombia is for cocaine, heroin and other drugs, while marijuana production is increasingly domestic. Legalizing only marijuana would therefore fail to achieve many benefits of broader legalization.

It is impossible to reconcile respect for individual liberty with drug prohibition. The U.S. has been at the forefront of this puritanical policy for almost a century, with disastrous consequences at home and abroad.

The U.S. repealed Prohibition of alcohol at the height of the Great Depression, in part because of increasing violence and in part because of diminishing tax revenues. Similar concerns apply today, and Attorney General Eric Holder’s recent announcement that the Drug Enforcement Administration will not raid medical marijuana distributors in California suggests an openness in the Obama administration to rethinking current practice.

Perhaps history will repeat itself, and the U.S. will abandon one of its most most disastrous policy experiments.

9 Responses to Stop Drug Violence? End Prohibition. Simple as That.