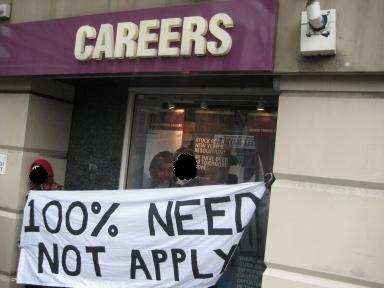 Stopping the War Machine: Military Recruiters Must Be Confronted
By Ron Kovic

As a former United States Marine Corps sergeant who was shot and paralyzed from my mid-chest down during my second tour of duty in Vietnam on Jan. 20, 1968, I am sending my complete support and admiration to all those now involved in the courageous struggle to stop military recruitment in Berkeley and across the country.

Not since the Vietnam War protests of the late 1960s has there been a cause more just than the one you are now engaged in. Who knows better the deep immorality and deception of military recruiters than those of us who, decades ago, entered those same recruiting offices with our fathers, believing in our hearts that we were being told the truth — only to discover later we had been deceived and terribly betrayed? Many of us paid for that deceit with our lives, years of suffering and bodies and minds that were never the same again. If only someone had warned us, if only someone had had the courage to speak out against the madness that we were being led into, if only someone could have protected us from the recruiters whose only wish was to make their quota, send us to boot camp and hide from us the dark secret of the nightmare which awaited us all.

Over the past five years, I have watched in horror the mirror image of another Vietnam unfolding in Iraq. So many similarities, so many things said that remind me of that war 30 years ago which left me paralyzed and confined to a wheelchair for life. Refusing to learn from the lessons of Vietnam, our government continues to pursue a policy of deception, distortion, manipulation and denial, doing everything it can to hide from the American people their true intentions and agenda in Iraq. As we pass the fifth anniversary of the start of this tragic and senseless war, I cannot help but think of the young men and women who have been wounded, nearly 30,000, flooding Walter Reed, Bethesda, Brooke Army Medical Center and veterans hospitals all across our country. Paraplegics, amputees, burn victims, the blinded, shocked and stunned, brain-damaged and psychologically stressed, a whole new generation of severely maimed men and women who were not even born when I came home wounded to the Bronx Veterans Hospital in New York in 1968.

Post-traumatic stress disorder (PTSD), which afflicted so many of us after Vietnam, is just now beginning to appear among soldiers recently returned from the current war. For some the agony and suffering, the sleepless nights, anxiety attacks and awful bouts of insomnia, alienation, anger and rage will last for decades — if not their whole lives. They will be trapped in a permanent nightmare of that war, of killing another man, a child, watching a friend die … fighting against an enemy that can never be seen, while at any moment someone, a child, a woman, an old man — anyone — might kill them.

These traumas return home with us and we carry them, sometimes hidden, for agonizing decades. They deeply impact our daily lives, and the lives closest to us. To kill another human being, to take another life out of this world with one pull of a trigger, is something that never leaves you. It is as if a part of you dies with that person. If you choose to keep on living, there may be a healing, and even hope and happiness again, but that scar and memory and sorrow will be with you forever. Why did the recruiters never mention these things? This was never in the slick pamphlets they gave us.

Some of these veterans are showing up at homeless shelters around our country, while others have begun to courageously speak out against the senselessness and insanity of this war and to demand answers from the leaders who sent them there. During the 2004 Democratic National Convention, returning soldiers formed a group called Iraq Veterans Against the War, just as we had marched in Miami in August of 1972 as Vietnam Veterans Against the War. Still others have refused deployment to Iraq, gone to Canada and begun resisting this immoral and illegal war. Like many other Americans, I have seen them on television or at the local veterans hospitals, but for the most part, they remain hidden like the flag-draped caskets of our dead returned to Dover Air Force Base in the dark of night, as this administration continues to pursue a policy of censorship, tightly controlling the images coming out of that war and rarely allowing the human cost of its policy to be seen.

Many of us promised ourselves long ago that we would never allow what happened to us in Vietnam to happen again. We had an obligation, a responsibility, as citizens, as Americans, as human beings, to raise our voices in protest. We could never forget the hospitals, the intensive-care wards, the wounded all around us fighting for their lives, those long and painful years after we came home, those lonely nights. There were lives to save on both sides, young men and women who would be disfigured and maimed, mothers and fathers who would lose their sons and daughters, wives and other loved ones who would suffer for decades to come if we did not do everything we could to stop the momentum of this madness.

It is time to stop the war machine. It is time for bold and daring action on the part of us all. Precious lives are at stake, both American and Iraqi, and military recruiters must be confronted at every turn, in every high school, every campus, every recruiting office, on every street corner, in every town and city across America. In no uncertain terms we must make it clear to them that by their actions they represent a threat to our community, to our children and all that we cherish. We must explain to them that condemning our young men and women to their death, setting them up to be horribly maimed, and psychologically damaged in a senseless and immoral war, is wrong and unpatriotic and will not be tolerated by Berkeley — or, for that matter, any town or city in the United States. 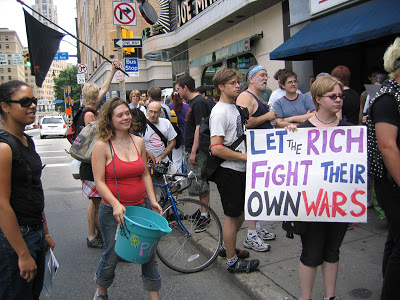 The days of deceiving, manipulating and victimizing our young people are over. We have had enough, and I strongly encourage all of you to use every means of creative, nonviolent civil disobedience to stop military recruitment all across our country. I stand with you in this important and courageous fight, and I am confident your actions in the days ahead will inspire countless others across our country to do everything they can to end this deeply immoral and illegal war.

(Note: This statement represents portions of several essays and writings I have done over the past five years.-R.K.)

Paralyzed from the chest down by Vietnam War wounds, and confined to a wheelchair for almost 40 years, Ron Kovic stands as a symbol of the brutality of war. He also exemplifies a man’s ability to transform such tragedy into a lifelong pursuit of peace—for himself and his country.

Kovic was born in Ladysmith, Wis., and grew up in Massapequa, N.Y. His autobiography, “Born on the Fourth of July,” was adapted as an Academy Award-winning film directed by Oliver Stone and starring Tom Cruise as Kovic. Kovic received a Golden Globe for his screenplay adaptation of his autobiography

Kovic is an outspoken critic of the war in Iraq.

This entry was posted in RagBlog and tagged GI's, Military, Peace Movement, Veterans. Bookmark the permalink.