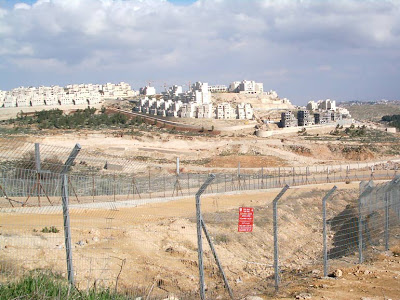 Can Barack Obama succeed in pressuring Israeli’s Netanyahu to stop the expansion of Israeli settlements on Palestinian land?
Can Obama Stop Israeli Settlements?

As Obama and his advisors see the issue, American interests in reigning in nuclear proliferation, reducing terrorism, and protecting sources of oil and natural gas in Muslim countries require ending the conflict between Israelis and Palestinians, or at least being seen trying our best to do so.

Now comes the heavy lifting. Barack Obama has spoken in Cairo, calling for a new beginning between the U.S. and the world’s one billion Muslims. All the major players have offered their initial reactions, and everyone from Israeli Prime Minister Bibi Netanyahu to the incredibly shrinking Osama bin Laden is asking the same question: Can Obama deliver?

The first and most obvious test will be Israeli settlements on the occupied West Bank. In his speech, Obama drew a rather modest line in the sand. “The United States does not accept the legitimacy of continued Israeli settlements,” he said. “This construction violates previous agreements and undermines efforts to achieve peace. It is time for these settlements to stop.”

Obama did not call for a withdrawal of existing settlements, the tearing down of the separation wall, or the opening of the Israeli-only highways that carve up the Palestinian land and make a viable state impossible. He left these and other life-and-death issues to future negotiations between the Israelis and Palestinians.

Even so, Netanyahu and his Likkud-led government said no. “Israel will not heed President Barack Obama’s powerful appeal to halt all settlement activity on lands the Palestinians claim for a future state, officials said Friday, a position that looks sure to cause a policy clash with its most powerful ally,” the Associated Press reported.

“The government plans to allow construction inside existing West Bank settlements to accommodate for growing families, said the officials.”

In their eagerness to avoid any suggestion of “moral equivalence” in the suffering of Palestinians and Jews, the American Likkudniks urged Obama to hold off on the settlements until he stopped the Iranian nuclear program, the build-up of Hamas missiles in Gaza, and the threat posed by a newly-strengthened Hezbollah in Lebanon.

And, no surprise, the same voices somehow managed to overlook the Fourth Geneva Convention, which makes it a crime in international law for any country to colonize land it has conquered in war.

One could be forgiven for beginning to see a pattern here.

Obama, in the meantime, soared above the fray. Having brilliantly used his speech to redefine the game, he deftly passed the ball to Bibi, suggesting that the Israeli leader might well become the Nixon of the Middle East.

Obama then flew off to the Nazi concentration camp at Buchenwald, where he repeated his condemnation of Iranian President Ahmadinejad and others who deny the reality of the Holocaust. Neither Netanyahu nor his American allies will get away with smearing this president as an enemy of either the Jewish people or the State of Israel.

All the while, the White House and State Department played solid defense, insisting that Obama was simply continuing the long-standing American opposition to Israeli settlements. Secretary of State Hillary Clinton even rejected the claims made by former Israeli officials that the administration of George W. Bush had secretly agreed to expanding Jewish settlements on the West Bank within their existing boundaries.

“There is no memorialization of any informal and oral agreements,” she told a news conference, as reported by the Israeli daily Haaretz. “If they did occur, which of course people say they did, they did not become part of the official position of the United States government.”

Will Obama make his opposition to the settlements stick where earlier administrations failed? He will definitely try, and the reason has nothing to do with whatever compassion he might feel for the Palestinians.

As Obama and his advisors see the issue, American interests in reigning in nuclear proliferation, reducing terrorism, and protecting sources of oil and natural gas in Muslim countries require ending the conflict between Israelis and Palestinians, or at least being seen trying our best to do so. This is where the “foreign policy realism” of the first George Bush meets “Change We Can Believe In,” and Obama’s speech in Cairo and meetings with Egypt’s Hosni Mubarak and Saudi King Abdullah set in motion a process that will push Washington in that direction.

Newsweek’s current interview with Saudi Foreign Minister Prince Saud al-Faisal makes the point. His message: The US should cut off aid if Israel does not end the occupation.

“The United States has the means to persuade the Israelis to work for a peaceful settlement,” said the Saudi prince. “It needs to tell them that if it is going to continue to help them, they must be reasonable and make reasonable concessions.”