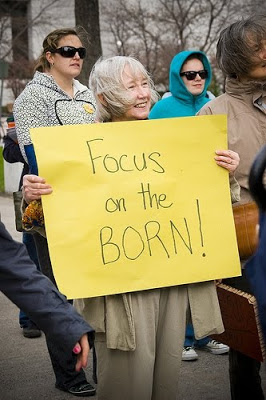 The thunderous applause greeting the announcement of the House’s health care reform bill, effectively curtailing women’s access to abortion, drowned out the cries and screams from our nation’s recent past. The cries and screams of everywoman, wretchedly pregnant, with no options but to take matters into her own hands.

But fortunately, there are those who remember.

The words of Dr. Edward Keemer of Washington D.C. help us imagine the absolute desperation these women must have felt:

I had treated a woman . . . [who] still had the straightened-out coat hanger hanging from her vagina. Some… died from air embolisms or infections. Over the years I was to encounter hundreds of other women who had resorted to imaginative but deadly methods of self-induced abortion… some would swallow quinine or turpentine. Others would insert a corrosive potassium permanganate tablet into their vaginas… A sixteen-year-old girl… died after douching with a cupful of bleach.

During the 1960s, a million women are estimated to have had illegal abortions. Of those who survived, untold numbers became sterile. By one count seven thousand women died from botched abortions in 1966 (compared to three thousand American deaths that year in Vietnam). Hard as it is verify these statistics, what we know is that the deaths and disabilities from illegal abortions fell disproportionately on poor women and women of color.

Maybe Bart Stupak and the merry band of 64 Democrats and 176 Republicans who voted for his amendment missed the memo, but the last time I checked abortion was still legal in this country. Now, though thanks to their cynical maneuvering, it will be beyond the reach of millions of women who need it, possibly forcing them to resort to the horrifying options of Dr. Keemer’s patients.

According to the National Organization of Women, the Stupak Amendment, if it remains in the final version of health insurance reform, will:

As Pulitzer Prize winning cartoonist Herblock commented wryly during the Reagan years, “It’s simple — if you could afford to have children, you could have an abortion.”

What Bart Stupak and Co. want goes way beyond the thirty year old Hyde Amendment, still in place, that forbids federal funds for abortion. There is a chance that the House abortion restrictions will be modified in committee, but I’m not counting on it. Ben Nelson (D-Neb.) has already suggested introducing a measure similar to the Stupak Amendment in the Senate Bill, and Harry Reid will have a hard time fighting the anti-abortionists especially since he personally does not support choice.

Dark clouds are looming on the horizon for women’s fundamental right to self-determination. By pandering to the hard-lobbying U.S. Catholic Bishops who demanded the elimination of abortion coverage from healthcare reform, we will now have to contend with a newly energized religious intrusion into our policies. The movement to grant fetuses, even eggs, personhood, supported by the religious right, is thriving.

Bills have recently been introduced into the state legislatures of Michigan and Tennessee, with the ultimate goal of making abortion murder under the Constitution regardless of the any Supreme Court decision. The Stupak Amendment is another tactic in the increasingly organized and well-financed drive to deprive women of their most fundamental rights.

When President Obama first applauded the House bill he not only didn’t express disappointment over the compromise on women’s health care, he didn’t even mention it! Only a day and a half later did he issue a tepid statement about restoring women to the status quo, steadfastly refusing to utter the dreaded a-word.

Maybe we’re seeing something many of us have tried to overlook. But it’s hard to forget the speed with which the president eliminated provisions to expand access to affordable family planning, cost effective legislation which would have helped millions of low-income women, from the economic stimulus bill. Or to overlook his use of the term partial-birth abortion in the third presidential debate, a phrase deplored by all who are pro-choice.

I’m starting to get the uneasy feeling that the Obama administration, like so many Democrats, considers women’s issues as marginal, even separate from their Progressive agenda. How can they believe they are protecting a woman’s health, while taking away her reproductive freedom?

The answer is they don’t.

This is only one more example of the ongoing rollback of women’s rights that we have been ignoring at our own peril. It’s time to say enough! We hear a lot these days about being on the right side of history. If we, as a nation really believe that, than how can we return to a history filled with the cries and screams of our foremothers?

[Barbara Berg is the author of Sexism in America: Alive, Well and Ruining Our Future (Chicago Review Press, Sept, 2009).]