Suddenly Becoming Aware of the Incline 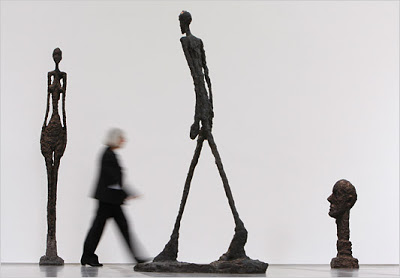 A woman walked past the sculptures, from left, of “Tall Woman III”, “Walking Man II” and “Monumental Head” by Alberto Giacometti at the Fondation Beyeler, Switzerland, in May 2009. Photo: Christian Hartmann/Reuters.
Blind Spot
By Mark Dow / June 11, 2009

Several years ago I walked into a room of Giacometti figures at the Museum of Modern Art and suddenly understood how to see sculpture. Gaunt and insistent, the figures drew everything unessential from what surrounded them. The negative shape of the space between the figures became a positive space.

That Giacometti’s true subject is the lone figure deep in the vortex only became clear to me, though, in the portrait paintings, such as those of the prostitute Caroline and of the artist’s mother, and this allowed me to see the frail indomitability of the sculpted figures in a new light.

When I lived on Miami Beach, a man named Simcha was often in the parking lot of the Publix Supermarket near the Talmudic University on Alton Road. “Simcha” wasn’t the name his parents gave him. He had re-named himself Simcha after he heard someone say “simcha,” Hebrew for happiness, and felt something positive — maybe a light, he said — inside his body.

Tall and skinny, not young and not old, a dirty beard down to his chest, wearing well-fitting, unwashed clothes and a skullcap on his noodle, Simcha smiled a lot and seemed to have several rows of bad teeth. First time we saw each other was on Ocean Drive when he was carrying a hand-lettered sign through nightclub crowds that were replacing the old people sitting on patio chairs and watching the sea. Simcha’s sign said, “I’ll answer any question.” I declined, but we chatted, and then one day on Lincoln Road, on a pedestrian mall, heard:

Mark! What does it mean that we’re meeting here right now? I’ll tell you what I think it means.

That morning I’d been working on a poem about a man named George. George and I had lived in the same building in Santa Ana, Calif. George used to spend his days on a hemorrhoid donut cushion in his easy chair, watching TV and hoping for a re-run of “The Russians Are Coming, The Russians Are Coming,” in which he had been an extra 20 years before. That morning, I had noticed how many times I’d repeated the word “stairs” in just a few lines of the poem. I hadn’t told Simcha any of this when he asked what it meant that we were meeting, then tapped a thick notebook under his arm and said he was writing a poem about stairs.

A few years earlier, while climbing a flight of stairs, he had suddenly become aware of the incline. He indicated the incline by holding his hand at an angle, long fingers outstretched. He felt the incline in his body, felt as if his insides were going in different directions, coming apart from each other. He had had to lie down, and claimed not to have used stairs since. Simcha told me that according to the Talmud according to one of his friends at Talmudic U., a building shouldn’t have more than two stories, and to reach the second story a Jew should use a ladder, not stairs. He asked: Does this have something to do with construction? Then he answered: No. It has to do with the concept. Jewish tradition is concerned with concepts, he said. He didn’t say what the stair concept was, but he did say that he had once met an autistic boy in New York who drew a box with a diagonal across it, but that since the boy had done this without any concept attached, it was a oneness without unity. Jews have lost the ability to feel the unity, he said.

Simcha had once watched as a woman drew a profile with a horizontal line behind her subject, and he found this disturbing because the horizon appeared to go through the subject. Then an artist taught him that by dropping the horizontal, by making it discontinuous so that it doesn’t appear to bisect the figure, he could make the vertical look more real. But right angles, he warned, can be dangerous.

A few weeks later, I was reaching into one of the yellow metal Miami Herald vending machine boxes on Alton Road, just down from Talmudic U., when Simcha approached and said he was looking for a student to study the philosophy of news. It was unclear whether he recognized me. My blue Cavalier wagon was idling at the curb. As the sharp-edged spring-hinged door of the Herald machine slammed shut, Simcha snapped:

Why did you close it?! I wanted a paper! How many times have you lost money in that machine? Why take a chance?!

I moved toward my car. He tried to be calm but couldn’t be:

We can discuss the paper. Don’t walk away from this!

Over the next few months, I’d often see Simcha standing near the Herald dispenser near Talmudic U. The last time I saw him at all, I was exiting I-395, the Julia Tuttle Causeway, which crosses Biscayne Bay from Miami to Miami Beach, and looping along the concrete clover leaf past Mount Sinai Hospital, south onto Alton Road. Simcha was sitting on the hilly embankment between freeway and entrance/exit ramps. His legs were straight out in front of him. His arms were also extended, hands holding at eye level what looked like a single page from a glossy magazine. He was either looking at one side of the page or showing the other to motorists too far away to see it.

[Mark Dow’s essays and poems have appeared in The Paris Review, PN Review (UK), Mudlark, Killing the Buddha, and SLAM! Wrestling. He is the author of “American Gulag: Inside U.S. Immigration Prisons,” and teaches English at Hunter College. He is working on a short book that touches on most of what he’s ever thought about.]

This entry was posted in RagBlog and tagged American Society, Existential Angst, Philosophy. Bookmark the permalink.