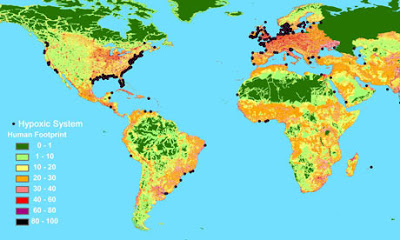 With more than 400 oxygen-starved dead zones in global coastal waters, scientists are calling for such dead zones to be recognised as one of the world’s great environmental problems.
Critically low oxygen levels now pose as great a threat to life in the world’s oceans as overfishing and habitat loss, say experts
By David Adam / August 15, 2008

Man-made pollution is spreading a growing number of suffocating dead zones across the world’s seas with disastrous consequences for marine life, scientists have warned.

The experts say the hundreds of regions of critically low oxygen now affect a combined area the size of New Zealand, and that they pose as great a threat to life in the world’s oceans as overfishing and habitat loss

The number of such seabed zones – caused when massive algal blooms feeding off pollutants such as fertiliser die and decay – has boomed in the last decade. There were some 405 recorded in coastal waters worldwide in 2007, up from 305 in 1995 and 162 in the 1980s.

Robert Diaz, an oceans expert at the US Virginia Institute of Marine Science, College of William and Mary, at Gloucester Point, said: “Dead zones were once rare. Now they’re commonplace. There are more of them in more places.”

Marine bacteria feed on the algae in the blooms after it has died and sunk to the bottom, and in doing so they use up all of the oxygen dissolved in the water. The resulting ‘hypoxic’ seabed zones can asphyxiate swathes of bottom dwelling organisms such as clams and worms, and disrupt fish populations.

Diaz and his colleague, Rutger Rosenberg of the department of marine ecology at the University of Gothenburg, call for more careful use of fertilisers to address the problem.

Writing in the journal Science, the researchers say the dead zones must be viewed as one of the “major global environmental problems”. They say: “There is no other variable of such ecological importance to coastal marine ecosystems that has changed so drastically over such a short time.”

The key solution, they say, is to “keep fertilisers on the land and out of the sea”. Changes in the way fertilisers and other pollutants are managed on land have already “virtually eliminated” dead zones from the Mersey and Thames estuaries, they say.

Diaz says his concern is shared by farmers who are worried about the high cost of fertilisers. “They certainly don’t want to see their dollars flowing off their fields. Scientists and farmers need to continue working together to minimise the transfer of nutrients from land to sea.”

The number of dead zones reported has doubled each decade since the 1960s, but the scientists say they are often ignored until they provoke problems among populations of larger creatures such as fish or lobsters. By killing or stunting the growth of bottom-dwelling organisms, the lack of oxygen denies food to creatures higher up the food chain.

The Baltic Sea, site of the world’s largest dead zone, has lost about 30% of its available food energy, which has led to a significant decline in its fisheries.

The lack of oxygen can also force fish into warmer waters closer to the surface, perhaps making them more susceptible to disease.

The size of marine dead zones often fluctuates with the seasons. A massive dead zone, some 8,000 square miles across, forms each summer in the Gulf of Mexico as floodwater flushes nitrogen-rich fertiliser into the Mississippi River.

Experts said it was slightly smaller than expected this year because Hurricane Dolly stirred up the water. Dead zones require the water to be separated into layers, with little or no mixing between.

As well as fertilisers rich in nitrates and phosphates, sewage discharges also contribute to the problem because they help the algal blooms to flourish.

Diaz and Rosenberg say: “We believe it would be unrealistic to return to pre-industrial levels of nutrient input [to oceans], but an appropriate management goal would be to reduce nutrient inputs to levels that occurred in the middle of the past century,” before the rise in added nutrients began to spread dead zones globally.

Climate change could be adding to the problem. Many regions are expected to experience more severe periods of heavy rain, which could wash more nutrients from farmland into rivers.

In May, scientists reported that oxygen-depleted zones in tropical oceans are expanding. They analysed oxygen levels in samples of seawater and found the effect was largest in the central and eastern tropical Atlantic and the equatorial Pacific. The increase could push oxygen-starved zones closer to the surface and give marine life such as fish less room to live and look for food.

The scientists, led by Lothar Stramma from the Leibniz Institute of Marine Sciences in Kiel, Germany, say the change could be linked to warming seas. At 0C, a litre of seawater can hold about 10ml of dissolved oxygen; at 25C this falls to 4ml. Stramma said: “Whether or not these observed changes in oxygen can be attributed to global warming alone is still unresolved.” The reduction could also be down to natural processes working on shorter timescales, he said.