This story yields speculation of another relatively predictable outcome: the acquital of KBR of any wrongdoing (see our post, Because the Empire is never, Ever Wrong – this is really all the same story, differing details). As Juan Cole points out, the circumstances that brought these Nepalese men to Iraq in the first place should be termed slavery (“human trafficking”) by any reasonable definition. How is it that this continues to occur in modern times? 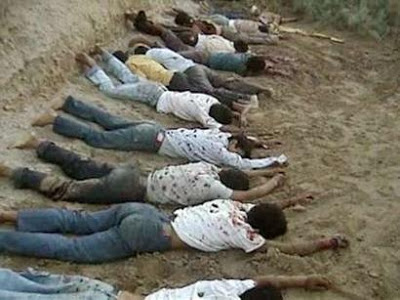 A Nepalese man and relatives of 12 others who were killed in Iraq four years ago are suing American firm KBR on charges of human trafficking.

The men were recruited in Nepal to work in a hotel in Jordan, but were later told they would have to work at a US air base in Iraq, their lawyers said.

Twelve of the men were kidnapped and killed by Islamic militants while being transported inside Iraq.

The 13th man was made to work against his will at the air base, lawyers said.

The execution-style killing of the hostages was recorded by the extremists and posted on a website.

The incident sparked riots in Nepal with angry demonstrators targeting a mosque, some government buildings and offices of employment agencies.

At least two people were killed in the protests.

The lawsuit filed in the US District Court in Los Angeles on Wednesday alleged “that the illicit trafficking scheme… was engineering by KBR and its subcontractor”, identified as Daoud & Partners.

The men, between the ages of 18 and 27, were recruited “to work as kitchen staff in hotels and restaurants in Amman, Jordan”, said a statement from Cohen, Milstein, Hausfeld & Toll, one of the law firms handling the case.

But once they arrived in Jordan “they were not provided the expected employment,” the statement said.

Their passports were seized, and they were told they were being sent to Iraq “to provide menial labour” at the Al-Asad air base, it added.

“For 15 months, the 13th man Buddi Prasad Gurung, was held in Iraq against his will, before KBR and Daoud allowed him to return home to Nepal,” the statement said.

“It doesn’t appear that any of them knew they were going to Iraq,” news agency Reuters quoted attorney Matthew Handley as saying.

KBR would not comment on the lawsuit, but in a statement, the company said it “in no way condones or tolerates unethical or illegal behaviour”.

Nepal banned its citizens from going to Iraq to work there in 2003 because of safety concerns.

But a lack of employment opportunities back home meant that private recruitment agencies continued to send Nepalese workers to Iraq through countries like Jordan and Kuwait.