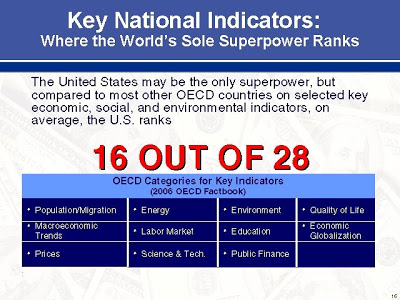 Graphic courtesy of Government Accountability Office.
The Upside of the Downside
By Case Wagenvoord / February 20, 2009

Now ‘tis the season when we reap the bilious harvest of seven decades of hubric delusion. It wasn’t just economic bubbles that kept us afloat, but a bloated military bubble that blinded us to the flaws that ran through our national psyche.

The man who believes himself invincible is a death waiting to happen. The same is true of a nation. “Superpower” isn’t a boast, it’s a death warrant, for once a nation buys into this fantasy, it proceeds to spend itself into bankruptcy just to keep up appearances.

As life as we knew it continues to collapse, a chilling truth is becoming evident. When the Cold War ended, there were two losers, the Soviet Union and us. The only difference being that the Soviet economy hollowed out right away. We managed to stumble along for another decade before ours started hollowing out.

However, there is an upside to all this. The rich may have to sell a villa or two, but they’ll still be rich while the poor will continue to get poorer. The threat of angry mobs wielding pitchforks and torches means we will have to speed up the militarization of our democracy, and that will be a boon to the defense and security industries.

There’s nothing like grinding poverty and brutal oppression to keep the masses in line. Bread lines and hob-nailed boots make for a stable society.