Suppressing the Research That Matters 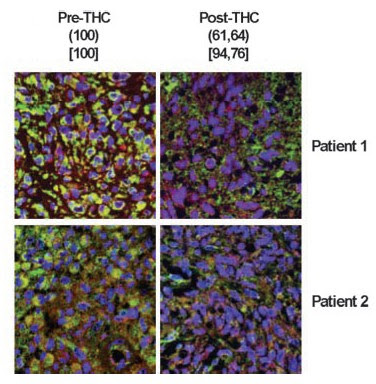 Here you can see the effect of the treatment on the two patients with brain cancers. VEGFR-2 activation is shown in green and its expression in red. Cell nuclei are stained in blue. Relative values of activated-VEGFR-2 pixels are displayed in parentheses and total-VEGFR-2 pixels in square brackets are given for the two patients per cell nucleus. (Credit: Cancer Research). Source: Roland Piquepaille’s Technology Trends
U.S. Government Stopped Research After
Finding That Marijuana Slowed Cancer Growth
By Scott Morgan

NORML’s Paul Armentano has a disturbing account of the history of government research regarding the benefits of THC as a potential cancer treatment:

Not familiar with this scientific research? Your government is.

In fact, the first experiment documenting pot’s potent anti-cancer effects took place in 1974 at the Medical College of Virginia at the behest federal bureaucrats. The results of that study, reported in an Aug. 18, 1974, Washington Post newspaper feature, were that marijuana’s primary psychoactive component, THC, “slowed the growth of lung cancers, breast cancers and a virus-induced leukemia in laboratory mice, and prolonged their lives by as much as 36 percent.”

Despite these favorable preliminary findings (eventually published the following year in the Journal of the National Cancer Institute), U.S. government officials refused to authorize any follow-up research until conducting a similar – though secret – clinical trial in the mid-1990s. That study, conducted by the U.S. National Toxicology Program to the tune of $2 million, concluded that mice and rats administered high doses of THC over long periods had greater protection against malignant tumors than untreated controls.

However, rather than publicize their findings, government researchers shelved the results, which only became public after a draft copy of its findings were leaked to the medical journal AIDS Treatment News, which in turn forwarded the story to the national media. [timesheraldonline.com]

They haven’t studied the issue since. And because the U.S. government holds a monopoly on “legal” marijuana that could be used for research purposes, they’ve been able to prevent independent researchers from further investigating marijuana’s promising anti-cancer properties. Armentano notes that research overseas continues to produce very encouraging results.

Unfortunately, our government’s blockade against marijuana/cancer research is so mindless and vindictive that it’s almost impossible to convince anyone that they do things like this. It’s a terrible and frequent conundrum for reformers that if we accurately describe the behavior of our opposition, we end up sounding crazy.