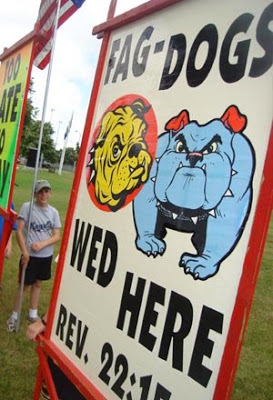 Signs from Westbury Baptist Church in Kansas: They want to build a statue of slain gay student Matthew Shepherd, with an inscription claiming he’s in Hell. Photo from Westboro website godhatesfags.com 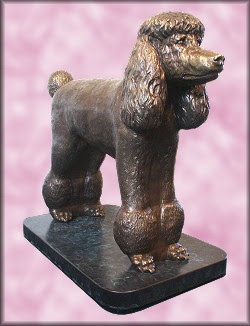 Can a fringe religious sect that believes in mummifying pets and their owners force a landmark Supreme Court decision on free speech?
By Stephanie Mencimer / November 13, 2008

Reverend Fred Phelps, the infamous head of the Westboro Baptist Church in Kansas, runs a website called www.godhatesfags.com and wants to erect a monument in Casper, Wyoming’s Historical Monument Plaza depicting Matthew Shepard, the gay University of Wyoming student who was murdered in 1998. The caption would read, “Matthew Shepard entered Hell October 12, 1998, in defiance of God’s warning ‘thou shalt not lie with mankind as with womankind; it is abomination.'”

The city of Casper has declined to host Phelps’ monument. But whether the city can keep it out hinges on how the US Supreme Court decides a major free speech case involving a fringe religious sect that specializes in mummification of its adherents and, occasionally, their pets. If the court comes to the rescue of the religious group, whose cause civil libertarians would normally support, cities and towns across the country might have no choice but to showcase all manner of bizarre or hateful monuments, like the one proposed by Phelps.

On Wednesday, the court heard oral arguments in Pleasant Grove City v. Summum, a case that is essentially forcing the justices to decide which is worse: letting the likes of Phelps fill public plazas with a parade of horrors, or allowing governments like Pleasant Grove to discriminate against religious minorities when it comes to adorning public space. The case got its start in Utah, a perennial hotbed of church/state separation litigation, and centers on a Ten Commandments monument in Pleasant Grove’s Pioneer Park. The monument is one of many erected around the country by the Fraternal Order of Eagles in the 1960s and ’70s with backing from Cecile B. DeMille, who was promoting his Charlton Heston movie. The monuments have generated a host of litigation in the past few years, and at least one previous Supreme Court decision.

Summum is a small religious sect founded in 1975 by the late Summum Bonum Amon Ra (who also went by Corky). The group operates out of a pyramid in Salt Lake City and is most famous for carrying on the Egyptian tradition of mummification, a practice that is also the sect’s primary source of income. Over the past 15 years, the group has become a thorn in the side of Mormon Utah towns that have public displays of the Ten Commandments. Summum first sued several towns to have the monuments removed in the mid-1990s. When those efforts failed, the group sought to erect monuments of its own, displaying its “Seven Aphorisms.” Summum believe that God gave Moses the Aphorisms before he handed down the Ten Commandments, but that Moses destroyed the original tablets because the people weren’t ready for the received wisdom. The Aphorisms, in the shortened version, are “Psychokinesis, Correspondence, Vibration, Opposition, Rhythm, Cause and Effect, and Gender.”

As you might expect, the Utah towns, including Pleasant Grove, all said no to the Aphorism monuments. In response, Summum sued them for violating the Establishment Clause, the constitutional wall between church and state that bars the government from favoring one religion over another. These would normally be slam-dunk cases because the towns so clearly discriminated against the sect. (In Pleasant Grove’s case, the town elders made up new rules for monuments after Summum’s request that conveniently excluded the Aphorisms.) This being Utah, where other nontraditional religious theories are mainstream, the case is anything but simple.

In 1973, the 10th Circuit Court of Appeals, which covers Utah, ruled in Anderson v. Salt Lake City that the Ten Commandments aren’t a religious symbol at all but are principally secular in nature, so governments can display them at will without any fear of violating the Establishment Clause. The case was one of the first to challenge a religious display and has remained the law of the Land of Zion ever since, even though the Supreme Court has found otherwise since then. That’s why Summum’s original attempts to eradicate these monuments initially failed.

Stymied, the Summum changed tactics. To get around the 10th Circuit’s finding, the group argued that favoring one faith over another in public monument selection constitutes not religious discrimination under the Establishment Clause but “viewpoint discrimination,” a free speech violation. That decision proved pivotal, and timely, as it was the same argument that many Christian-right groups were using to score big victories in the Supreme Court to win permission for religious groups to use public school facilities, among other things. Under its free speech argument, Summum won a trio of lawsuits, though still failed to get the Aphorisms installed. The cities of Ogden and Salt Lake chose to remove the Ten Commandments rather than install the Aphorisms. In 2003, the city of Duchesne took the extraordinary measure of privatizing a 10-by-10-foot square around its Ten Commandments monument to prevent a Summum installation.

In 2003, the group sued Pleasant Grove for violating its free speech rights. Again, the case went to federal court. But this time, the court ruled against Summum. The group appealed to the 10th Circuit, where a three-judge panel ordered Pleasant Grove to let Summum install their monument. Pleasant Grove asked for a rehearing on the case by the full circuit, which was denied. But the conflicting opinions of the judges on the rehearing issue, particularly that of Judge Michael McConnell, who is regarded as one of the country’s leading experts on religion and the law, practically begged the Supreme Court to take up the case. (The decision also emboldened Reverend Phelps to make his request for the Matthew Shepard monument.) The case attracted the attention of the religious right and its leading public interest law firm, the American Center for Law & Justice, which had pioneered the use of free speech arguments to expand religion into the public sphere. But in this case it took the exact opposite position, coming out against the sect. With help from the well-known ACLJ lawyer Jay Sekulow, Pleasant Grove appealed, and Wednesday, Sekulow argued the case before the Supreme Court.

Sekulow’s position in the case conflicts with his earlier arguments against religious discrimination. Based on his litigation record, you’d think he’d support more religion in public space, not less. But Sekulow and his supporters don’t want just any religion in public space—just their own. They want the government to be able to discriminate among religious faiths. Christian-right groups also fear that if Pleasant Grove loses this case, Ten Commandment monuments nationwide will be threatened, and ultimately removed, as they were in Ogden and Salt Lake. Hence the brief in Summum filed by Roy Moore, the former Alabama Supreme Court chief justice who lost his job after he ignored a federal court order to remove an enormous Decalogue from his courthouse. Now head of the Foundation for Moral Law, Moore issued a statement on the Summum case saying, “Neither the U.S. Constitution nor the radical opinions of federal courts give judges a right to act as park managers to install the beliefs of a new age religion foreign to our culture and heritage.”

You’d think that in a case like this, civil liberties groups would be eager to defend Summum’s free speech rights from the right wingers in the high court. Instead, the case has totally befuddled the usual defenders of religious minorities. Sadly for Summum, most of those groups are sitting this one out. Americans United for Separation of Church and State and other civil liberties groups filed amicus briefs, but supporting neither side. They simply argued that the case should not be decided on free speech grounds at all and suggested that the court instead correct the 10th Circuit’s screwy 1970s-era decision on the Establishment Clause that said the Ten Commandments weren’t a religious icon. The ACLU chose to abstain from the case altogether. Summum’s supporters are few and far between. The reason, of course, is Fred Phelps. A win for Summum would bar governments from discriminating in its choice of monuments in places like the National Mall, and essentially force federal and state authorities to either let everyone in or get rid of the monuments altogether.

The only hope for Summum is Chief Justice John Roberts’ prediction in oral arguments on Wednesday: They’ll be back. The current case only involves the First Amendment free speech rights. Summum never asked the court to consider whether Pleasant Grove had violated the Establishment Clause by turning down its Seven Aphorisms, which it appears the city clearly did. Roberts noted that the court could expect to see Summum before the court in about five years after it litigates the other issue. After all, Roberts asked, “What is the government doing supporting the Ten Commandments?”

[Stephanie Mencimer is a reporter in Mother Jones’ Washington, DC, bureau and the author of Blocking the Courthouse Door: How the Republican Party and Its Corporate Allies Are Taking Away Your Right to Sue (Free Press, 2006).]