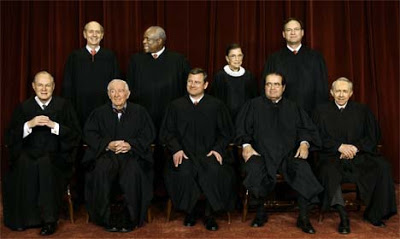 David Van Os is a Texas attorney and a populist democrat.

In the case of Boumediene v. Bush, issued on June 12, 2008, holding that the Guantanamo Bay detainees have a Constitutional right to file habeas corpus petitions in the courts of the United States to question the legality of their detentions, the majority of the Justices of the Supreme Court of the United States have done what we expect them to do in times of crisis for our Constitutional rule of law.

This decision will go down as one of those decisive moments in American history when a majority of the Justices realized they had to take stern action to preserve the Constitutional framework of the republic from an aberrant course. The decision is a dramatic repudiation of the whole purported legal edifice of the neocons. Under this ruling, neither George Bush nor any other American president may use threats to national security, either real or imagined, as an excuse to override the Constitution.

Under this ruling, neither George Bush nor any other American president may decide for himself or herself what the president’s powers are without the constraint of our Constitutional checks and balances. Under this decision, the Magna Charta is rescued from the Bushite/neocon jackboot.

This decision dispels clouds of gloom. To all of us who have experienced so many discouraging moments during the awful neocon nightmare of recent years, this action of our nation’s highest court is the kind of thing that tells us our system may still be capable of protecting us from tyranny. It is the kind of thing that says perhaps the neocon thugs will indeed all get their come-uppance before it’s all said and done. It is the kind of transcendental event that restores hope and renders great cheer for all who love the promise of democracy and freedom that our national forebears proclaimed to a waiting world on July 4, 1776.

For a moment, we can allow ourselves to feel genuinely optimistic about how it is all going to finally turn out in the matter of the people vs. the neocons and Bushites. For just a moment, though. The Constitution survived a very close call by a very close margin, a 5-4 vote of the Justices. John Bush III McCain was quick to express disagreement with the decision. Senator Barack Obama agrees with the decision. Senator Obama is already on public record opposing the neocons’ bankrupt theories of Constitutional law as expressed by the four dissenters, Roberts, Scalia, Thomas, and Alito.

For the sake of my country and all it stands for, for the sake of all that its patriot sons and daughters have sacrificed down through the centuries and decades and years, for the sake of my children’s right to grow up as free citizens of a Constitutional democracy, I want Barack Obama, not Bush III McCain, filling the next vacancies on the United States Supreme Court. I am going to put every possible effort I can into making that happen by winning the electoral votes of my state of Texas. I hope you all do the same.