Surprise! : Banks to Use Bailout Bucks for Mergers

The Rag Blog reported yesterday, in a story titled Salary Bonuses Constitute 10% of the Bailout that pay and bonus deals for corporate bigwigs account for about ten percent of the government bailout package.

Here’s more good news: Big banks appear poised to use bailout funds to gobble up smaller banks. Hey, that’s not what they told us the money was for. I’m so confused… 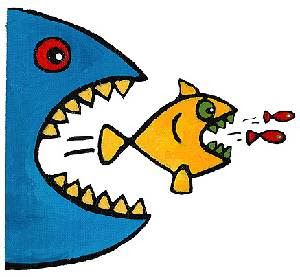 The Treasury Department’s capital injection program is well underway, with more than $150 billion total now promised to around 30 banks. So far, the evidence suggests many of those banks will use the cash to buy up weaker banks.

That’s not how the program was sold. Banks were going to use the money to lend, Treasury Secretary Hank Paulson announced earlier this month. “This increased lending will benefit the U.S. economy and the American people,” he said. The banks were supposed to “strengthen their efforts to help struggling homeowners who can afford their homes avoid foreclosure.”

Joe Nocera writes in the New York Times that it’s the “dirty little secret of the banking industry” that the taxpayer money won’t be used to expand lending. And, listening in on an employee conference call at JP Morgan Chase, he heard an executive tell it straight:

“Twenty-five billion dollars is obviously going to help the folks who are struggling more than Chase… What we do think it will help us do is perhaps be a little bit more active on the acquisition side or opportunistic side for some banks who are still struggling. And I would not assume that we are done on the acquisition side just because of the Washington Mutual and Bear Stearns mergers. I think there are going to be some great opportunities for us to grow in this environment, and I think we have an opportunity to use that $25 billion in that way and obviously depending on whether recession turns into depression or what happens in the future, you know, we have that as a backstop.”

The government’s investment in the banks, of course, comes with few strings attached and no requirement on how the money can be used.

About 20 regional banks have signed up for the bailout program, joining the eight big banks that signed up earlier this month. The government has reportedly decided not to name the latest round of banks, fearing that investors would quickly punish a bank that’s omitted. The banks themselves have been left to announce their participation. (We’re putting together a list of the bailed-out banks and will post that later in the day).

The Wall Street Journal reports this morning on a number of regional banks that have announced their participation. And judging from their announcements, they have a similar take as JP Morgan Chase on how they’ll be using the money:

Capital One spokesperson Tatiana Stead said the investment “puts us in a stronger position to take advantage of opportunities that may emerge from the current banking environment.”

Other banks gave similar sentiments, with SunTrust Chairman and Chief Executive James M. Wells III saying the extra money will allow his company to expand, though the current climate calls for elevated capital levels even if expansion wasn’t being eyed.

There is one notable exception to the no-lending trend. The CEO of Ohio-based Huntington Bancshares ($1.4 billion in bailout bucks) says that the money will allow the company “to expand our lending efforts to both existing and new customers throughout our Midwest footprint.”

One bank, PNC, has already used its government money to fund a takeover. Last Friday, PNC made two announcements: It was buying National City for $5.58 billion, and it was getting $7.7 billion as part of the capital injection program. The government clearly played a key role in the deal. National City, weakened by mortgage losses, was forced to find a seller, the Washington Post reports, after the government turned down its request to join the program.

Treasury officials first announced that “one purpose of this plan is to drive consolidation” last week. If that’s the case, it’s going forward with little public debate.