Surrealist Group : No War on the Moon! 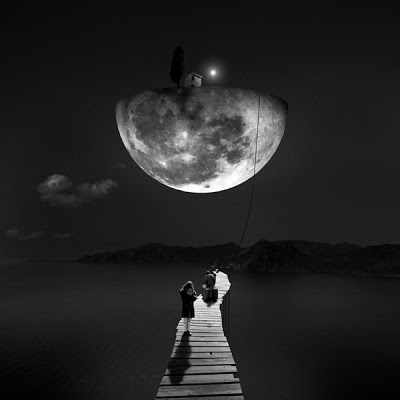 “But, for myself, the Earth’s records had taught me to look for widest ruin as the price of highest civilization.”— Edgar Allan Poe, The Colloquy Of Monos And Una (1850)

Twenty years before a powerful syndicate of military-industrial criminals conspired to plant a U.S. flag on the Moon, a similar clique of fiends plotted to fire a nuclear warhead-tipped intercontinental ballistic missile at the lunar face. Code-named “Project A119,” this plan devised by Cold War-era Air Force and weapons manufacturers called for a massive nuclear explosion that would be clearly visible from anywhere on Earth.

Researchers struggled in vain to find any pretext, any shred of legitimate scientific value, to glean from this sickening display of militarist impunity. But the sole objective of Project A119 was to terrorize into submission every human on the planet (especially those who had never heard of Hiroshima or Nagasaki) with a demonstration of how the U.S. ruling class was technologically adept and morally bankrupt enough to commit such an unimaginable poetic atrocity.

And now, once again, there are plans to bomb the Moon. This time the unilateral strike is aimed at the Moon’s South Pole and the payload will be delivered by the LCROSS (Lunar CRater Observation and Sensing Satellite) spacecraft; the excuse given is that this is an effort to find water deep under lunar surface. The craft was launched in late June and is currently orbiting the Earth until it finds its target; if all goes according to plan, the M-Day bombing will be 8 October 2009.

The plan is this: the LCROSS first shoots off its 2,300-pound spent booster-rocket at the lunar target zone. Four minutes later, in a scheme apparently inspired by fanatical terrorist airline hijackers, the rest of the robotic LCROSS craft slams into the same area. Like crazed kamikaze paparazzi, the craft will snap photos and transmit data on the first strike back to NASA’s mad bombers before immolating itself in a second explosion.

This violent hi-tech sci-fi spectacle will cost anywhere up to $600 million, a price tag that is an outrageous insult to the millions of working people unable to feed, house, or medically treat their families. (As Gil Scott-Heron lamented in 1974: “How come there ain’t no money here? Hmm! Whitey’s on the Moon…”)

Of course, there is much more behind this attack than casual scientific curiosity on whether or not there is water on the Moon. First of all, since the long-range accuracy of intercontinental ballistic missiles has never been proven to work, the LCROSS suicide mission serves as a live-fire test exercise for U.S. war strategists with an interest in the precision of orbiting satellite weapons — in other words, the southern hemisphere of the Moon will be turned into a firing range, making this mission one giant leap for the global reach of space warfare.

Secondly, LCROSS has been promoted as “the vanguard” for the U.S. military-industrial-entertainment complex’s return to the Moon—according to NASA, finding water is a necessary first step for “building a long-term and sustainable human presence” there. Historically, the purpose of exploration has always been the exploitation of resources and the colonization of territory without regard for ecosystems or indigenous peoples, and clearly the Moon is the next territory coveted by imperialists.

Only people with colonized minds believe these things are positive, or that this type of “progress” can be beneficial to anyone beyond a small circle of exploiter-elites. And, as to be expected, there is no end to the number of those who seek to compensate for their own personal impotence by over-identifying with these grotesque displays of obscene state-corporate power. You can hear them chattering on the Internet: “Flying a rocket booster into the Moon at 5,600 mph to trigger a massive explosion is just flat-out cool,” says one, while another sneers “Public discussion? Why should there be a ‘public discussion’ about a NASA experiment?”

Such remarks challenge our contempt. There should be a discussion, not only by the public, but also by oceans, weather patterns, plants, and all sorts of other living things — even the most uninformed know enough about the “butterfly effect” to realize that changing one part of any system is going to have a cascading effect on all those things dependent upon that system.

This so-called “NASA experiment” is a hostile act of aggression and a violent intrusion upon our closest and dearest celestial neighbor. Does any love song or poem or fairy tale worth its salt not mention the Moon? Who can take a walk in the Moonlight with a lover and not feel the romance to your very soul? At night, when the Moon rules, we sleep, and we can visit the Moon in our sleep with ease. The Moon is our night light, our blanket, our grandmother, our mother — it is woman, child, domestic life, tides, bodies of water, liquids, circulation, comfort, nurturing, paintings by Remedios Varo, stories by Jules Verne, and so much more.

Let us assume that ignorance will rule the day and plans go forward. What can we as surrealists or lunatics or astrologers or naturalists or anarcho-primitivists or Greens or werewolves or pagans or psychics or UFO groupies or other concerned members of the general public do? We must soothe the Moon, we bandage her. We implore other celestial bodies and entities to aid her. We will not let her endure this crime or its grim aftermath alone.

We need to communicate to the Moon. Talk to her in our dreams, trances, or meditations, and prepare her for this shock and wound as best we can. Hold her, send out imaginative protection to her, and put our dream bodies out there in front of the bomb. Collectively, we can sabotage the bombing or by imagining all manner of things going wrong, or encouraging the Moon to increase her own magnetic shields. Sing to her. Give her back just a tiny portion of all that she has done for us. We are all created from Moon dust.

We pledge solidarity with the Moon and promise we will do everything that we can to help heal her and to prevent any further such stupid, short-sighted, self-serving, man-made acts of obscene violence against her.

1 Response to Surrealist Group : No War on the Moon!