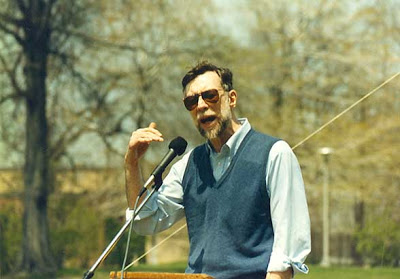 On July 24 The Rag Blog ran what proved to be a very controversial review of former SDS leader Carl Oglesby’s memoir, Ravens in the Storm. The review, written by Mariann Wizard, stirred up a storm of its own. Wizard’s (and Oglesby’s) negative characterization of Mike Klonsky – a sixties New Left leader, now a respected educator who writes on educational reform – resulted in an angry response. The discussion was joined by a number of other readers, most of whom had personal experience with the times and the players.

The resulting flurry stirred up once more some of the divisions that plagued the New Left and that were a major factor in its demise. It also offered an opportunity to revisit those issues with the benefit of a longer view.

The following account is from Susan Klonsky, who was also active in SDS and the larger movement. Susan and Mike live in Chicago; they co-authored Small Schools: Public School Reform Meets the Ownership Society.

Carl Oglesby’s The Raven in the Storm, and the resulting storm created by Mariann Wizard’s review, once more revisited
By Susan Klonsky / The Rag Blog / July 30, 2008

One night last winter Mike and I ventured out in the subzero to Barnes & Noble specifically to read Carl Oglesby’s book (too cheap to order it), following the review in the NY Times. We took 2 copies of it and sat down for a couple of hours to peruse it. I knew Carl very well but I escaped mention in this book.

We were both audibly groaning by the time we gave up. A reviewer for some other publication (I believe it was Ron Jacobs) characterized the book as possessing the tone of an embittered divorcee still trying to settle the unresolved score with an ex-. That’s about it. It reads a bit like a failed screenplay. I figured perhaps Carl was trying to get it optioned. (Spielberg was at that time casting for The Trial of the Chicago Seven, with Sascha Baron Cohen as Abbie Hoffman. I wanted Fred Thompson to play Judge Hoffman.)

A funny thing about Carl’s bitterness toward Mike: About ten years ago we attended an sds reunion in Great Barrington (Massachusetts). Carl and Mike sat down to talk. Carl told Mike he was very angry about something MK had supposedly said about him, which Carl had heard secondhand (who knows what the issue was? something from 30-40 years ago) from Tom Hayden. Mike explained to him that Tom had him mixed up with this other guy Bob Avakian, the head of the RCP. Carl had sort of a Rosanne Rosannadanna moment (or was it Emily Litella?) –after nourishing this grudge for decades, he just shrugs and says, “Oh. Never mind.”

But now it’s all rehashed in this stupid story in which he describes MK as having, among other things, “a strong nose,” as if the schnozz is an aggressive characteristic… What is his beef with Mike? In a meeting held in late 1967, Mike, who was at that time serving as national secretary of sds, asked Carl to explain what he was doing about some political relationship or issue–that’s it. No accusations of anticommunism, no charges of misconduct–and the guy has been pissed for 40+ years. He did not like being asked about his work. It’s remarkably inane and self-pitying.

Yet, if you reflect on Oglesby’s role in history when his role mattered, I think it was on the whole positive and progressive. He was a person who spoke eloquently and publicly about rejecting the values of war and corporate domination of U.S. policy. He moved many people, young and old, to oppose the Vietnam war.

In the brief period of his leadership in sds, he was in the segue between the overt anti-communism of the SLID and the ascendance of the revolutionary youth movement.

But then, perhaps because his feelings were hurt, he removed himself entirely from the movement. He focused his efforts in this book on creating a record of his role as he would want to be recalled. He recalls nothing good or warmly remembered about any of our old comrades. This book is entitled a record of the movement of the 60s. But it’s not. It’s about what he says he said and what he says others said back, and how surrounded he was by enemies, and how unappreciated he was. I intended to go back and see how he describes his life after sds, but honestly, I found it too boring to pursue that line. I hear Carl’s health has been in decline, and I wish him well. It doesn’t make the book truer, but it may explain some of his thoughts or imaginings.

I take this book, and several others of recent vintage, as a warning. If you decide to memorialize your thoughts and your activities in a book, speak for yourself. Don’t put words in the mouths of others, living or dead. Don’t impute motives based on their facial features, their purported tone of voice, as you recall it from 30 or 40 years out…Show a little respect for the fact that all of us from that time who are lucky enough to still be living, have gone on working, building organizations, raising families, making difficult decisions, regretting some things and still proud of others.

For the lot of us, pride for having been part of it all remains a warm ember despite all that has happened to each person since those times. Surely being a grown-up means moving on, past the juvenile name-calling, and relinquishing the real or imagined slights of junior high school. So it is with the movement. Remember what’s worthy of remembering, and move on; it’s a useful way to live.

[Go here to read Mariann Wizard’s review of Ravens in the Storm, published in The Rag Blog on July 24, followed by responses from Mike Klonsky and a number of others.]